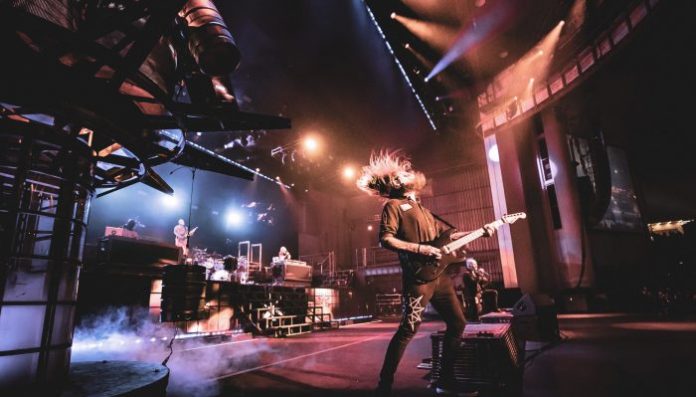 Marking the close of their storming Knotfest Roadshow that’s toured the States since September, metal titans Slipknot are preparing for their first-ever livestream on Friday at the band’s largest show to date, Knotfest Los Angeles. Bringing their inimitable show to the Banc of California Stadium, the band are celebrating playing the biggest venue in their colorful history by streaming the entire performance to audiences across the globe via Veeps.

Celebrating alongside the rest of the show’s lineup, including Bring Me The Horizon and Killswitch Engage for select performances before the headliner, this event is set to be a Slipknot show to remember. Exploring the significance of this livestream, its place in the band’s history and what fans can expect to experience from the comfort of their own homes, drummer Jay Weinberg spoke to Alternative Press to give us the lowdown on Slipknot’s epic tour finale.

Why have you chosen this show in particular as your first foray into livestreams? It’s surprising you haven’t tried it out sooner during the pandemic.

As a fan, I really enjoyed some of my favorite artists taking advantage of these imposed restrictions that we’re all dealing with by staying creative and making cool things. It made this whole experience of being locked in our houses a lot more tolerable. For us, it never really spoke to us to do a livestream because we went in a different direction and holed up to get creative instead of doing more performances. Having our first livestream of this period being Slipknot’s first-ever headlining stadium show and our largest-ever headlining show is something really special, and we’ll be able to celebrate coming back onstage. Slipknot is a band that comes alive onstage.

Slipknot shows are so intense and visceral. They’re like no other experience in life. How do you think that is going to translate onto fans’ screens across the world? How are you all preparing to make it feel the same as being in the depths of the pit but in the comfort of their own home?

Even though it’s our largest show ever, only a finite amount of people would be able to see it, so this is a great exercise in developing Knotfest into more than just an event. I don’t prepare for it any differently than any other show, and I think that’s the task. The trick for me is to not think about it because there’s too much to think about. I leave the things I can’t control up to the other creative people, so I’m back up there playing the drums, but there’re guys with 50 cameras everywhere. What we can bring to the table is doing our own thing and trusting in the creative people around us because it’s so much more than just us; there’s an artistry to filming things, capturing the audio and presenting it in an entertaining way that makes you feel like you’re actually there.

Slipknot are much more than a band; it’s a culture, a community, a place to call home for Maggots worldwide. What part can livestreams like this play in forming that community and adding to the rich history surrounding this band?

There is a bit of extra weight knowing that there’s more permanence to a livestream. When you’re going from city to city, you know there’s nothing that could replicate what’s going to happen at each show. However, when you have something like the show that ended up as the Day Of The Gusano DVD at Knotfest Mexico or what we’re looking forward to Knotfest LA, you want to make sure you do all your homework in advance and put your best foot forward because there’s a permanence to having all these cameras and the audio dialed in just right.

You want to make sure it’ll live forever as its own thing. I get weeks to record my drums in the studio, but we only get one shot at this show. You should treat every day like it has that same reverence, and I hope that translates when we play on Friday.

What can we expect from this show? What’s the setlist looking like?

We really wanted to put together a show for ourselves that’s high energy pretty much the entire time. That’s what translates the best. It’s fun for me looking back over years of listening to the band as a fan thinking, “I wish they’d play this song!” We’ve done that before, but this time, everything is up to 11. It’s full tilt all the way.

This tour’s setlist really fits the spirit of everybody being so thrilled to be back because it was certainly scary at first, and it continues to be because COVID’s not done, but if we can do this safely, let’s celebrate the music. We’ve been really refining our chops on this tour, so there might be some special things in store because it is such a special event. There might be some left turns when we approach this monumental event in the band’s history, but nothing I’ll divulge yet.

You grew up as a fan of the band before joining them. If you could go back to that time and see they had a livestream coming up, what would you want to see and hear?

I would expect this band to be prepared, to give their all. That’s what’s been really refreshing on this tour. I honestly feel like these shows over the last month-and-a-half have been some of our best shows, period. There’s a renewed sense of urgency and tightness within our group. Having been in the band for a while, I’ve come to expect that it’s 110% all the time at every show because nobody onstage wants to let each other down, and I feel like the fans know that too.

Having seen it from the outside before and now being on the inside, I could’ve guessed the amount of work it takes to be in Slipknot, but I never truly knew. You can never be prepared for what this band puts you through until you’re in it. Slipknot is a million miles an hour. It has no mercy on any of us, so you have to put the work in to receive what it gives back, which is reciprocal with ourselves and anybody who wants to listen. The fact we have this opportunity to demonstrate that work, passion, energy and ferocity at this stage in the game, 22 years into Slipknot being in the band, is a huge thing, and I’m very proud of it.

Slipknot have teased new music coming “any day now.” How soon can we hear your next era? Could we still see a new record in the next two months?

Any day could be any day. There’s absolutely stuff happening. We’ve been productive with this time [where] we haven’t been playing shows. Nobody expected us to release “All Out Life” out of thin air in 2018, that was really exciting for us. Taking lessons from that experience but doing something a little different this time, there’re secrets coming along the way, so stay patient. I know you guys want to hear new stuff. So do we! We’re as excited about it as you are, but I find it really gratifying that nobody will hear it until the time is right, so just keep waiting a little longer, but it’s not going to be long.