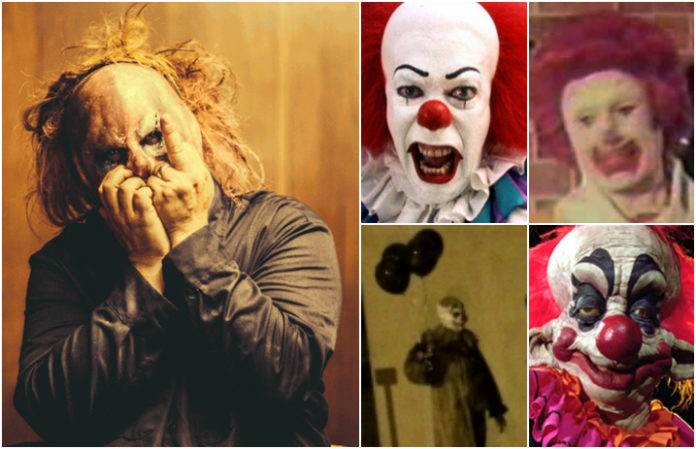 Who better to evaluate clowns than Slipknot’s very own Clown?

With the release of the new adaptation of Stephen King’s It hitting theaters this week, we figured we’d get Slipknot founder and percussionist M. Shawn “Clown” Crahan’s take on some of the scariest clowns around. Find out what he has to say below!

Ever the clown auteur, Crahan also directed Slipknot’s new concert documentary film, Day Of The Gusano, which will be released in various Blu-ray, DVD and live album combos on Oct. 20. Get more details on the Slipknot movie here.

Read more: Slipknot fans are so devoted, Clown says a family sold their car for tickets

“Pennywise: only Tim Curry,” says Crahan, comparing Curry’s classic ’90s clown-tagonist to this year’s film portrayal by Bill Skarsgård. “It’s all about the human that’s behind the clown. So, the first is Mr. Curry. He’s too much; he’s just perfect. I haven’t seen the new one yet—I haven’t even seen any of the trailers—but we’ll see how that does. We’ll see if the thought process and the performance happens.”

“Ronald McDonald? We gotta be careful what we say about Ronald,” Crahan says. “He wears the crown, whether we like it or not. Over five billion served! You gotta eat to live. And we’re eating his food… we don’t know what’s in it, we just know we like it. That clown there, that’s a serious clown because he’s backed by money. It’s corporate. You gotta kinda bow to that clown; that clown will fuck you up.”

“Most of these were bullshit,” contends Crahan of the creepy clown sightings that swept the nation last year. “As a clown, what I possess is a gift. I can give you all of the color or none of the color, right now, and I can just tweak you out. I can cater to what you hate, immediately. Just dump it like a garbage truck in your lap. Just overpower your senses. That’s what clowns are.

“When you look at these clowns, most of them—you can tell immediately—are just bullshit,” Crahan continues. “But the ones that were real? Some fucking clown that is like 10 feet into the forest, behind a fence, in front of a Dumpster? That’s the clown to be worried about, if you’re worried about clowns. The clowns that are all up in your face, being filmed, and then the videos are edited to look overbearing—they’re just catering to a philosophy that they don’t understand. Maybe they should go be mimes.”

“I’ll tell you something interesting about my Clown,” Crahan offers of his own onstage visage. “I was in a mall somewhere and my wife was running around shopping in some department store. I was on the phone, but about 30 yards away, someone started coming up behind me, and I heard, ‘Clown?’ I turned around and it’s this random Maggot [Slipknot fan] with his girlfriend. I was like, ‘How’d you know it was me?’ You know, I’m in a different state in some random department store with my back turned to the person! And he said, ‘It’s how you hold yourself. You’re the Clown.’

“I was like, ‘You’re absolutely right,’” recalls Crahan. “I understood exactly what he was talking about. And that’s kinda what I was saying about those clowns from the sightings: You know the ones that are real. They could have their back to you, and you’d still be like, ‘Fuck this.’ The other ones just don’t match the perfectionism.”

“Clowns that eat you as cotton candy blood-balls?” Crahan rhetorically implores, clearly familiar with the late-’80s cult film. “Those are scary fucking clowns. They’re scary, but they’re not human, so you don’t take them as seriously as a human wearing clown makeup.”

Is there a particular clown you find scariest? Whether listed here or otherwise, let us know your top spooky clown choices down in the comments!