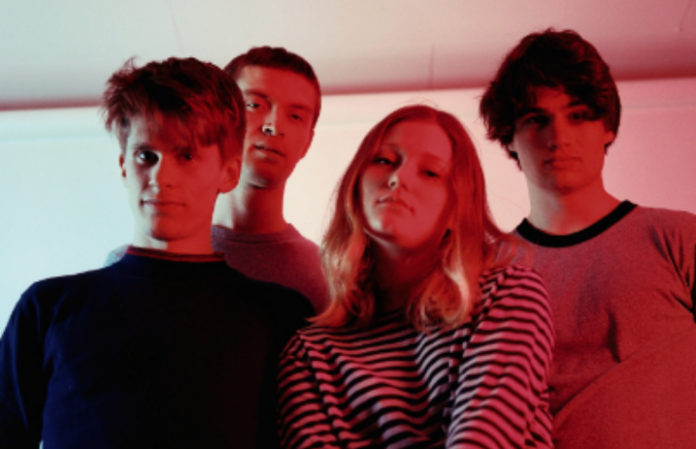 Norwegian pop-rock group Sløtface (pronounced slut-face) are premiering their ode to introverts with “Pitted” off their debut album Try Not To Freak Out.

Listen to the song below:

With the recent release of their song “Nancy Drew” and the bands previous EPs Empire Records and Sponge State, Sløtface has solidified themselves as a band on a mission to deliver a message with their music out to the masses. As a band in their twenties, Try Not to Freak Out is Sløtface's offical foot forward in refining their sound and leaving their teenage years behind them.

AP caught up with singer Haley Shea about the writing process for “Pitted,” maintaining the balance between pop sound and meaningful lyrics and fighting the urge to watch Netflix.

What was writing “Pitted” like for you, and what makes it such a special track on Try Not To Freak Out?
“Pitted” was a pretty smooth track to write for the album. We all had a pretty similar and clear idea of a super uplifting pop song with a crazy out-of-control break in the middle. It's one of the poppiest songs on the album with a really clear chorus melody, which makes it stand out and also it has this crazy trumpet part—played by Norwegian jazz musician Simen Kiil Halvorsen—on it that was super fun to put into a song. It's our first song with horns!

It's an anthem about not wanting to go out, but having the greatest time when you do. Is this something you can relate to?
Absolutely. It's kind of our pep talk to ourselves to get off of the couch and out the door. Sometimes you end up having an amazing night out with friends and strangers, even though you may not have been feeling it when you're all curled up with Netflix and blankets.

Sonically, you seemingly sit on this balance between powerful punk and boppy pop. This song should make someone want to get up and dance around! When putting this song together, and producing this record as a whole, what was your mindset behind the lyrical message, the sound and how they work together—especially considering the important and relevant topics you confront through your music?
We think pop music is a great tool to sneak really important messages into catchy melodies. It's a very discreet kind of brainwashing. We really love the mix of kind of sarcastic, self-deprecating humor (for example, on “Pitted”) and super high-energy guitar pop-punk; and we think those things are funny to play off of each other, so that's a tool we've used a lot on the record.

What's one message you hope listeners will take away from the song?
If you have the chance, get out there and enjoy your friends company. Netflix will be there when you get back.

Try Not To Freak Out is out September 15 via Propeller Recordings and is available for preorder here.