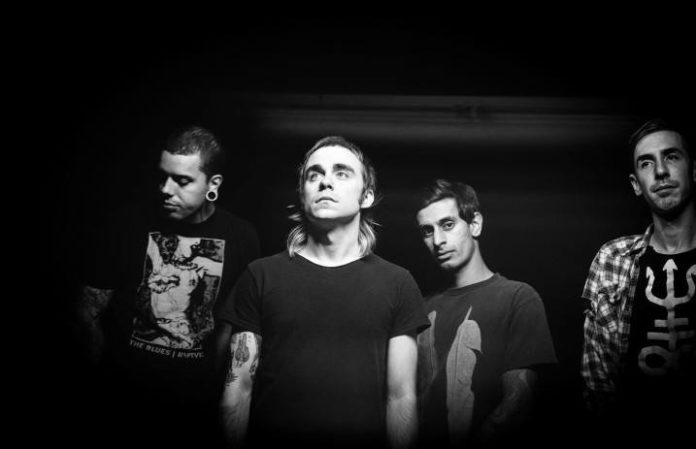 Read more: Our Most Anticipated alternative releases of 2018

“This song started its life during the writing of our first album with the working title 'Surf Against the Machine,' due to the beachy-vibed major-chord verses and the groovy rhythm section Timmy (guitarist) and Jared (drums) crafted,” says vocalist Jonny Andrew. “The song really came to life when Timmy came upon the chorus melody while demoing for the upcoming release. I dangerously wrote the lyrics to the first verse on my phone while driving home from practice one night, and it details a battle against one's own ego and self importance.”

Listen to “Cataracts” below:

We sat down with Slow Bloom's Timmy Lodhi (guitar) and Jonny Andrew (vocals) to learn more about their band, Hex Hex Hex and what they have in store for the future. Check out the interview below.

How did the band get started?
LODHI: We started Slow Bloom after the four of us spent a summer touring across the U.S. in our previous bands, State Faults and Strike To Survive. We came home and decided to collaborate on a new project shortly after that.

What are some of your biggest influences, both musically and aesthetically?
LODHI: I can only speak for myself in saying that I’ve always admired bands like Nirvana, Queens Of The Stone Age and Refused. Any music that has serious rock 'n’ roll energy will usually get me excited.

How would you describe your music in three words?
LODHI: Bang your head.

Who would be your dream collaboration?
LODHI: Writing an album with Dave Grohl in Seattle during the winter of 1995.

You mention “Cataracts” is about the battle against one’s own ego and self-importance. Can you elaborate on that? What happened?
ANDREW: I think it comes with the territory of being an artist or a musician really. When you create something meant to be shared, you start basing your self worth and importance on its success, which can be damaging whether that piece of art is well-liked or not. It’s easy to get wrapped up in a huge ego trip when your craft starts taking off, so to me the song serves as a reminder that I am human with all my faults and fears still beside me. No success or failure in any sense should sway me from always looking within and to the ones I love for happiness.

What’s your resolution for 2018? What’s your goal?
LODHI: We want to start touring—bad. We also may or may not be working on a full-length. Also there’s some big shows to announce soon. We have a lot planned for 2018 and don’t plan on slowing down.

What’s been your favorite venue to play, ever, and why?
LODHI: The Rickshaw Stop in San Francisco. It’s sounds just like heaven.

What do you hope listeners get from Hex Hex Hex?
LODHI: We hope that people hear something that immediately grabs them. Something they’ve been wanting to hear but haven’t heard yet. That’s what makes me really fall in love with a band.

How stoked are you for the album to come out?
LODHI: Very. We’ve been sitting on these songs for a long time, and we can’t wait to release them.

What up-and-coming band(s) are you really into right now and why?
LODHI: I’ve been blown away by a lot of the music coming out of the UK and Europe right now. Some bands include Dinosaur Pile-Up, Fangclub, Wolf Alice and Milk Teeth. They’re all taking my favorite music from the '90s and playing it better.