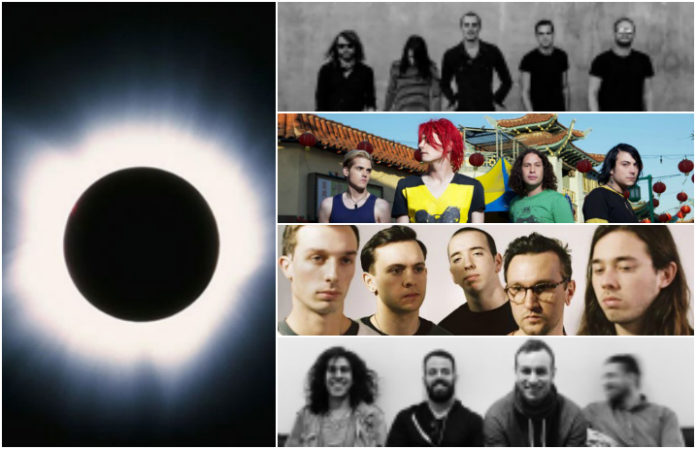 Solar eclipses don't happen every day, and as NASA's interns have proven, there are plenty of songs on the topic, too.

You shared your love for the emo tracks on their playlist, so we decided to follow their lead and compile a playlist with some of our favorite songs as well.

Check out the actually stellar playlist below!

Below are the tracks compiled by the lovely folks over at NASA:

“Eclipse”—Lindsey Stirling
“Eclipse”—LOONA/Kim Lip
“Eclipse”—Pink Floyd
“Endless Night”—Original Broadway Cast of The Lion King
“Fly me to the Moon”—Frank Sinatra
“Galaxies”—Owl City
“Here Comes the Sun”—The Beatles
“Hometown”—Twenty One Pilots
“Let the Sunshine In”—Original Broadway Cast of Hair
“Little Star/Eclipse”—Sammy Hagar
“Northern Downpour”—Panic! at the Disco
“The Sky and the Dawn and the Sun”—Celtic Woman
“A Sky Full of Stars”—Coldplay
“The Sound of Silence”—Simon and Garfunkel
“Sun Is Gonna Shine”—Carman Cusack
“Total Eclipse of the Heart”—Bonnie Tyler
“Touch the Sky”—Disney
“Under A Paper Moon”—All Time Low
“When the Day Met The Night”—Panic! at the Disco
“Why Does the Sun Shine?”—They Might be Giants
“You’re So Vain”—Carly Simon

But there were a few songs you wanted included—and we listened:

I was thinking Linkin Park – Shadow of the Day

they totally missed @Thrice stare at the sun for that playlist

And lets not forget to mention the album artwork from AFI's Burials:

you forgot one. @AFI pic.twitter.com/6n7qrCpx8L

And Architect's All Our Gods Have Abandoned Us:

Check out our playlist, featuring a few of our favorites, below!

And keep up-to-date on the Eclipse happenings via NASA's live coverage below:

We’re live on @Twitter @Periscope with coverage of #SolarEclipse2017 across America! Tune in now: https://t.co/Wbaid2DrfL

Don't mind us as we jam out during the eclipse—wearing protective glasses, of course.

What songs are on your Solar Eclipse-inspired playlist? Let us know in the comments below!