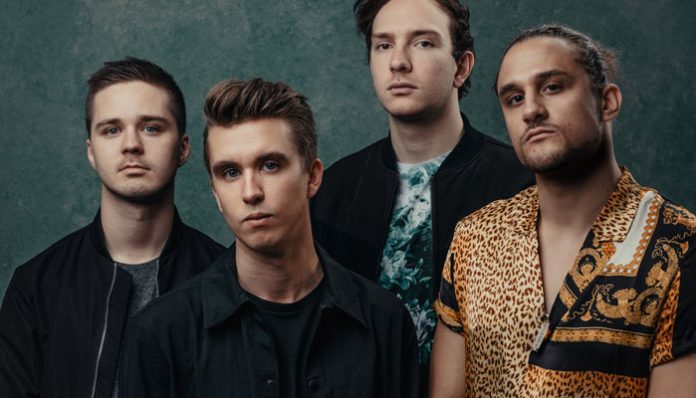 Nobody needs to be reminded that life is hard. The combined tumult of biological fear, cultural uprising and dubious political moves in the world is more than enough evidence. But we do need to remember that we all have a moral compass inside us. Swedish electronic-metal act Solence understand this implicitly. That’s why Alternative Press is premiering the lyric video for “Direction,” the title of their new EP. It’s the follow-up to their 2019 debut album, Brothers, which was a calling card for the band’s style of anthemic rock.

Fronted by singer Markus Videsäter, Solence emphasize different aspects of their sound with interesting results. Guitarist David Strääf and drummer David Vikingsson bring the accelerated drive to the proceedings while synth op Johan Swärd creates the melodic vistas that give the tracks an uplifting, cinematic feel.

Videsäter answered our questions about the philosophy behind “Direction” and Solence’s approach toward their craft.

What is “Direction” about? Are you discussing the idea of the moral compass that we assume everybody has? Was there a particular or cumulative incidents that inspired you to write the song?

“Direction” is basically about following your heart and that little voice you have inside of you. Sometimes you can feel lost in life, especially in this day and age when everyone has an opinion about how you’re supposed to be, feel and behave. With this song, we wanna make you feel like you’re strong enough to believe in your beliefs, create your own rules and follow your own personal direction. There hasn’t been a specific incident that inspired us to write the song. But I’d say that over the years of fighting for your dreams in this band and in the music business, the will to inspire others—and sometimes reminding ourselves with our own words—has slowly grown.

I’d say it depends on the song. We’re not your typical two guitars, bass [and] drums rock band. That’s because we’re inspired not by genres but by songs, melodies and chords. That’s what we’re driven by. Other than that, we feel like every song is different, so we add different instruments to every song. But with the powerful lyrical content and the message we’ve been trying to get through lately, it has been cool to combine it with super-hard-hitting electronic productions. So, I guess that for the latest songs, we’ve been an electronic-rock band.

What non-musical influences do the band take from? There’s a personality to Solence that sounds much more thoughtful than “We like to rock, man…”

Anything that has to do with philosophy about motivation, work, group dynamics and positivity inspires us. We’re very interested in how to reach your personal goals while staying as positive as possible during the journey. We can sit and talk for hours about how you feel as good as possible while still reaching where you wanna reach. I think it’s because it’s really hard to have a band, in general. You become a family and have to live through the tension, the hardships and the fun times that come with having people extremely close to you. Otherwise, we’re into movies, mainly action/fantasy, Marvel, anime [and[ gaming. But I don’t think it’s really inspiring us in the music. Maybe it’ll show in the future. Who knows?

How is Sweden holding up during the world pandemic? Are Solence feeling any kind of need to respond to the situation in a personal or artistic way? Is it even possible to create art that’s not influenced by stay-at-home lockdowns?

The short answer: great. Sweden has of course suffered through some tragic death numbers due to COVID-19, but we’ve had no lockdown, quarantine or anything like that. So, life has basically just been normal. The main difference is that we’ve been in separate locations during the spring, so we’ve had to write songs online. But we’ve been doing that for years, so that hasn’t been a big problem. So, nothing’s really changed.

Presave your copy of Direction here. Check out the lyric video for the song below.