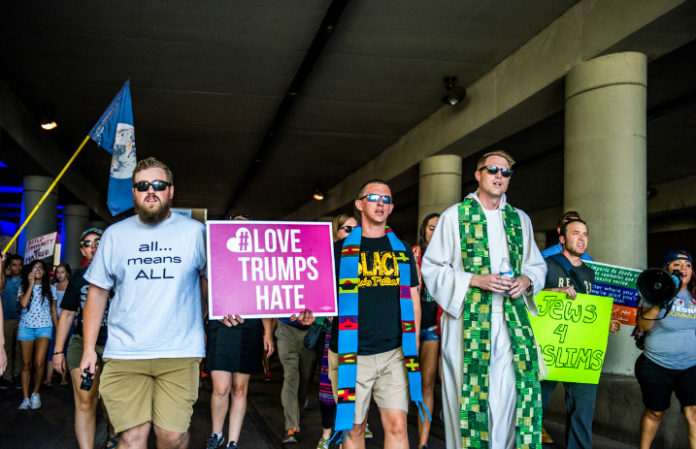 The scene has spoken out against the alt-right violence and protests taking place in Charlottesville, with more than 100 alt-right activists, white nationalists and neo-Confederates marching through University of Virginia’s campus, according to CBS.

More than 100 alt-right activists, white nationalists and neo-Confederates marched through University of Virginia's campus Friday night, ahead of a Saturday demonstration to protest the removal of a Confederate statue.

According to CNN, a state of emergency has been issued by Virginia's governor after the “Unite the Right” rally was declared unlawful, causing eruptions of violence between torch-bearing demonstrators and counter-protesters.

Since the protest began, there have been three deaths. 32-year-old Heather Heyer was killed on Saturday after a car drove into a group of counterprotesters that had gathered to oppose the “Unite The Right” rally. According to CNN, 19 others were injured in the purposeful crash.

Video of the growing memorial for the woman killed Saturday in #Charlottesville. pic.twitter.com/osOgr2ugRh

My heart goes out to Heather Heyer's family. She died standing up against hate & bigotry. Her bravery should inspire all to come together. pic.twitter.com/1Zbi2D2Vgq

Lt. Cullen and Trooper-Pilot Bates died in a helicopter crash outside the Charlottesville city limits on their way to assist with efforts during the rally as well.

“Virginia State Police Lieutenant H. Jay Cullen and Trooper-Pilot Berke M. M. Bates were working with the Charlottesville Police and their brothers and sisters in the Virginia State Police to help ensure the safety of the many city residents and visitors who were in Charlottesville yesterday. These men gave their lives in the line of duty and our gratitude to them cannot be overstated,“ Washington, D.C.'s WJLA shared.

In response to the violence and hatred, people around the country have united in solidarity with Charlottesville. See how the country united in support below:

This is what 682 events in solidarity with #Charlottesville look like on a map. THIS is America. Find yours: https://t.co/nKSXu3EI2w pic.twitter.com/Mkg15Q8FKU

Jamie Tworkowski, To Write Love On Her Arms:

If this weekend has been too much, and you're not sure you can keep going, please stay. We're all in this together. https://t.co/8LiAt9NXSS

Demonstrators gather at the White House to show solidarity for Charlottesville victims https://t.co/y5fSTpIIlc

Denver is out here in solidarity with #Charolettesville even in the rain. pic.twitter.com/myHsO97m2N

300 protesters are about to march on Philly in solidarity with charlottesville pic.twitter.com/PSxNuBtrxH

Cincinnatians holding a peaceful vigil for those in Charlottesville after yesterday's tragedy pic.twitter.com/WI8u17XJgU

Throngs stretching back from where we came.
Solidarity Against Hate March to Westlake.#Seattle #Charlottesville pic.twitter.com/G5QOra8jtX

A huge crowd in #Seattle about to march in memory of #HeatherHeyer, in solidarity w/ victims of white supremacists + against hate groups. pic.twitter.com/3678UCgslV

If you would like to show your support for Charlottesville, there has been a donation page launched that you can check out here.

Our thoughts are with those who have lost their lives—and those who are bravely using their voice—as we stand with Charlottesville.