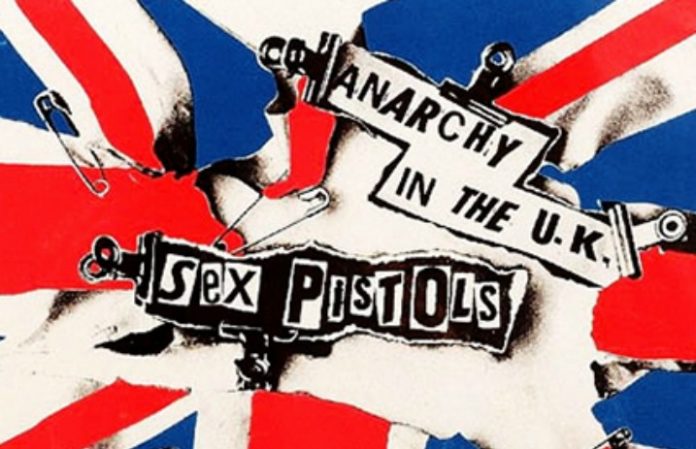 Earlier this year, Joe Corré made headlines in the UK for announcing that he would be setting fire to his punk memorabilia collection on November 26, the 40th anniversary of the release of the Sex Pistols’ debut single, “Anarchy In The UK.” But Corré isn’t some middle-aged guy with a stack of old records complaining about “the kids” and longing for the “good ol’ days” of the punk-rock movement. Corré is the son of the original punk power-couple of contemporary fashion designer Dame Vivienne Westwood and notorious Sex Pistols manager Malcolm McLaren. Which means his collection (artifacts ranging from a Sid Vicious doll, clothes worn by frontman John “Johnny Rotten” Lydon, extremely rare copies of the Pistols’ “God Save The Queen” single pressed then withdrawn by the A&M label and so much more) is worth much more than cred points—it’s bona fide history.

This immolation of culture (and the days leading up to it) are being immortalized in Burn Punk, a documentary being filmed for British television. Co-produced by Corré and Andrew Eborn of Octopus TV, the film chronicles Corré’s disgust with the marketing/carpetbagging of punk by both British corporate interests and politicians alike. Brands as diverse as McDonald’s and Louis Vuitton are using the history to acquire market share, while the London city government are embracing the anniversary heartily. “What punk symbolized then is dead,” says Corré. “Now it's being pored over, pricked and prodded by the commercial sector and the state. When the Heritage Lottery fund along with The Mayor of London supports Punk London’s ‘2016, Year Of Punk’, you really have to ask yourself what the hell it means any more. Conformity in another uniform.”

In March, Corré announced his intentions to burn his collection, estimated to be worth around £5 million (approximately $6.2 million) to protest the commodification of the original movement. “We need to discuss the difference between value and price as well as the parallels between the No Future generation of the 70s and the younger generation today facing social cleansing, student debt and disastrous climate change.”

Octopus TV's CEO Eborn says, “We are proud to be working with Joe Corré chronicling this momentous occasion. This is a pivotal part of popular cultural history and a catalyst to raising awareness of key issues, questioning authenticity and resisting propaganda whilst underpinning the DIY creative empowerment for change and offering solutions. As Oscar Wilde pointed out, people know the price of everything and the value of nothing. Nostalgia ain't what it used to be. Punk is Dad.”

When Corré—a successful executive who was key in the growth of the British lingerie label Agent Provocateur years ago—announced his intentions earlier this year, he was met with both ambivalence (cynics dismissing the act as a publicity stunt) and harsh criticism. The most vocal of these was from Tim Sommer, the American writer/musician/journalist/former major-label A&R executive (type his name alongside Hootie And The Blowfish into Google and see what comes up) whose essay for The Guardian achieved new heights in vitriol. Sommer strongly urged for the collection to be sold at auction with the proceeds earmarked for the further evolution of punk. “The ‘real’ punk rock thing to do would be to sell that memorabilia (and let’s assume it’s actually worth $7 million, though I remain hugely incredulous) and buy 28,000 guitars and basses,” Sommer wrote. “Give those out to people and tell them to create a new kind of punk, something that is as unimaginable to our ears as punk rock was to the ELP fans your parents rebelled against. Or better yet, give 28,000 guitars to 28,000 girls, and tell them to make fucking noise outside their state capitols the next time some assholes try to take away their rights.” He also questioned what was in Corré’s collection in the first place to arrive at the multi-million dollar price tag—or a self-serving tax write-off.

Corré responded to Sommers’ contempt with the dismissive “you don’t know who I am” stance, the one popular with anonymous posters on the ‘net and “tru punx” who feel they are being oppressed in some capacity.

But in his case, he has the history to back it up: Writing on the Burn Punk London site, Corré did go on to discuss how his parents and the punk community were set upon by British thugs and law enforcement in those nascent days of the scene, while fast-forwarding the stance to the current day. “There are parallels to be drawn between the no future generation of the 1970s and today’s. London is suffering social cleansing and being turned into some sort of theme park for rich people who don’t pay their taxes whilst ordinary people cannot afford to live here. It disgusts me that a mayor who devised an initiation ceremony of his Bullingdon club to burn money in front of homeless people coupled with his indifference to the plight of the real problems of ordinary people in this city and his disregard for their future is now supporting 40 years of ‘Anarchy In The UK.’ What I am doing is highlighting the hypocrisy at the core of this hijacking, and it’s why I am inviting him to light the match on November 26.”

Both Corré and Sommers’ points are valid but also steeped in naivete. Really, how many great bands would be jumpstarted by the owners of 28,000 guitars bought from proceeds derived from the sale of the collection? And how would erasing the historical artifacts of a vibrant, valid cultural movement benefit future generations? To others, the very idea this conversation is happening in the first place is positively vibrant. Maybe the best thing to happen 40 days from now would be for a coalition of punks ages 15 to 60 will break through the security barricades around the incineration ceremony and selflessly jump in the flames. To quote the character Laine Hanson in the political drama film The Contender, “Principles only mean something when you stick to them when it’s inconvenient.” At the very least, maybe someone will jump in the flames to rescue some of those Pistols A&M pressings, giving some to passionate fans dedicated to their continuing punk ideals, who could never afford to own one, while auctioning off a couple to pay for the expensive skingraft procedures that neo-Robin Hood would have to go through.