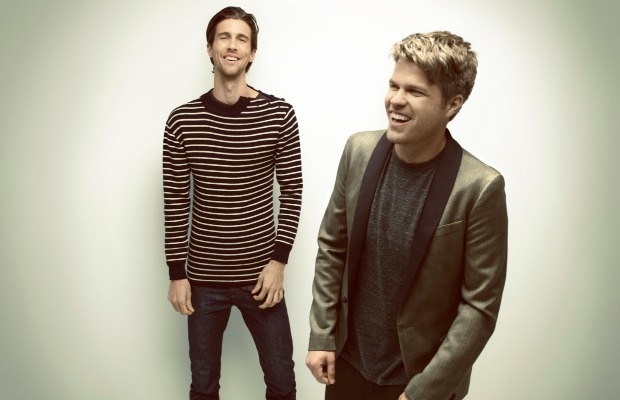 Their current album is called Omens, and the latest offering from 3OH!3 definitely foreshadows the Colorado duo’s fall tour. Titled “Turn The Night On,” the new track–premiered exclusively on altpress.com below–is a four-way collaboration with their autumn tourmates, the Summer Set, Wallpaper. and New Beat Fund.

We caught up with 3OH!3’s Nat Motte to talk about the new song, some old Warped Tour memories and why it’s now perfectly legal to make 3OH!3 “hand diamonds.”

Whose idea was it to collaborate on “Turn The Night On”?
I think it actually came through management channels. They proposed that it’d be fun to do a track with the whole tour. It’s funny, because these days a collaboration track is so crazy because it’s literally across the world. I think Sean [Foreman, of 3OH!3] initially got together with Brian [frontman] from the Summer Set and wrote a part, but besides that, everyone else was working on their own, just emailing parts in. So I was trying to patch together this weird monster of a song and make it cohesive and cool.

And above and beyond that, we’ve been working on a video. We just filmed our part yesterday in Omaha, Nebraska.

Whose influence would you say wins out on the track?
I guess it’s probably us, because I produced the track. But the initial production was by Ricky [Reed] from Wallpaper. He sent me a version of the track…The finishing touches are more our stuff. But I played it for a few people, and they were pretty excited, because they said it sounds really fluid. A lot of collaborations sound like they’re a little all over the place, and maybe lack continuity. But I’m pretty proud of this because I think it sounds like we were all in the studio together.

You guys were on Warped Tour again over the summer. How has it changed since you first did it five years ago?
I think the physical way we play our music has changed pretty dramatically. On that first tour, being products of the hip-hop scene, we’d just throw up a track, and hopefully people would go crazy. [Laughs.] But that was really a magical year; we met a lot of people and made a lot of friendships. Katy Perry was on that tour, and after a while, her band started setting up with us. And that was really the spark that sent us in a new direction, where we started trying to mix electronic music seamlessly with a band. So the sound has evolved that way, and gotten bigger and more expansive.

And then some things haven’t changed at all, which I think is great. We’re more interested in rockin’ a party and making sure that someone who comes out for what may be their two or three nights a year can go crazy and have a great time. It’s more important to rock a party than a “performance.” We’re still skewed toward that, that general energy and vibe that comes out of our shows.

You mentioned the connection you made with Katy Perry, and she’s since become a friend and collaborator. Was there anyone you had a similar connection with on Warped ’13?
It’s funny, because in the past couple of years, we’ve really focused on working with other artists–writing and co-writing, and doing production. I’ve got a song on the new Maroon 5 record ["Love Somebody”] and through that, we’ve had a chance to work with some other artists. We’ve worked with a duo named Karmin. We had a lot of fun with them, and in a couple of days we wrote two songs for them. There are a lot of nice, fun, funny and talented people in the music business, and it’s really cool to develop these friendships that turn into working relations with them.

The collaboration song for this tour is exactly that. All of these artists were on Warped this summer. We knew Summer Set and Wallpaper.already, but we all had a chance to hang out and get to know each other better, and the collaboration on “Turn The Night On” came out of that experience.

What’s going to be different in terms of the setlist for the fall tour versus Warped?
I think one thing’s obvious: Our set on Warped was about 40 minutes, which is pretty short for a headlining set. We were playing songs from every one of our albums on Warped, and kind of weaving in and out of them, and sometimes re-orchestrating them. But we’ll have longer [t[to play]maybe an hour, and hour and 15 minutes.

And then on a macro level, obviously Warped is a bigger crowd, and it’s outside. But a venue gig is “more intimate” and in some ways I think it can be a more special experience.

I’m assuming one difference is that you’re planning to play “Turn The Night On.”
I was just thinking about how we’re gonna be playing that. Yeah, it’ll definitely be on the tour.

Omens took three years to finally see release. Are there any outtakes that will find their way into the live show?
Yeah, actually, there is. There are a couple of songs that I went in and completely remixed. One of them is “Two Girlfriends,” which is a kind of fun, tongue-in-cheek song, and we did a viral video for it. So we’re gonna play that [v[version]ive. And then it’s just a question of time constraints. We have four albums, so we have to pick and choose what to offer fans of our older stuff. So in terms of new-new stuff, we’ll probably do the tour song and “Two Girlfriends.”

A lot of the kids who became 3OH!3 fans at the time of “Don’t Trust Me” are now adults. What kind of changes have you seen in the fanbase over the last half-decade?
It’s a very interesting point. It’s kind of crazy to think that we’ve been touring for five-and-a-half years, and that’s a long portion of some people’s lives.

I think the median age of our fans has probably gone up a few years, undoubtedly. But we’ve always done a wide variety of shows. We’ve always consciously and subconsciously, catered to a lot of fans across age range, across scenes of music, to really not put any sort of limitations on who can listen to our music.

We’ve played a lot of college shows, and it’s really cool when we talk to kids, before or after a show, and people come up and say, “You were my favorite band in ninth grade!” It’s very touching to hear that you’ve been a part of people’s lives for that long. But we very consciously want to make our music accessible to everyone.

Some of that music, as you mentioned earlier, has been made with and for other artists. Can you see a time when 3OH!3 albums and tours will become less frequent, and writing and producing for other people will dominate?
I think that’s dependent on a lot of different factors. When 3OH!3 are going, [w[we go]ull-blast, and when there’s downtime, that’s when we’ve had a chance to work with other artists. But as we’ve gotten older in the music business, we’ve expanded our musical palette and taken on a lot of different projects. I’m currently scoring a movie with a composer friend of mine, and that’s just been a wonderful experience.

I guess our interests have diversified a lot. We’re a bit more spread out. I don’t think we’re ever gonna tour again like we did when we first came out, when we were literally on tour for a year-and-a-half, two years, that first slingshot that bands have. But I think 3OH!3 will always be at the center of what we do.

You guys continue to have hits, for yourselves and for other artists. You’re still on a major label, which not everyone who was on a major five years ago can say. You’ve met and collaborated with lots of interesting people. What part of all that would have surprised you the most five years ago?
I guess I don’t spend too much time thinking about that. [Laughs.]ut all the surprises, I think, would have been pleasant surprises. I guess maybe the biggest surprise would be the external stuff. Having a song on a Maroon 5 record and having that be the single and walking into a gas station in upstate New York, and hearing it. We’ve had that feeling in 3OH!3, but it never gets old.

A big part of the 3OH!3 legend is that you deferred admission to med school for several years while the band were getting big, and then finally the statute of limitations ran out. Do you remember at what point you finally decided that it just wasn’t gonna happen?
Well, in the summer of 2008, when we went on that first Warped Tour, that was when I was accepted to medical school at the University of Colorado. And it was only the eye-opening experience of that tour–seeing places we’d never seen before, and seeing two, three thousand people waiting for our set–that made me realize, “Holy shit, maybe I should probably delay this.” [Laughs.]nd after four consecutive years of deferral…For me, over those four years I realized this wasn’t just a fling for us. We’re dedicated and smart enough about our career that we’ve actually been able to build a career. So for me, there wasn’t one specific moment. It really was a more gradual thing.

And to be honest, it still is. [Laughs.]’m a Type A personality, so it’s hard for me to be absolutely comfortable anywhere. So who knows what the next five years will bring? In our field of business, five years is kind of like an eternity. So maybe that’s a follow-up to a follow-up. [Laughs.]p>

One final question: I read an interview recently where you said you couldn’t comment on the lawsuit by the professional wrestler Diamond Dallas Page, who was claiming you guys, like Jay-Z, had stolen his “diamond cutter” hand sign. But is it safe to say the situation has been resolved?
Yeah, it’s been resolved. It was a kind of shitty situation, but it’s been resolved. It’s past, man!

Now you can gesture with impunity.
Yeah, now we can get back to being No. 1 in the WWE. [Laughs.]ALT