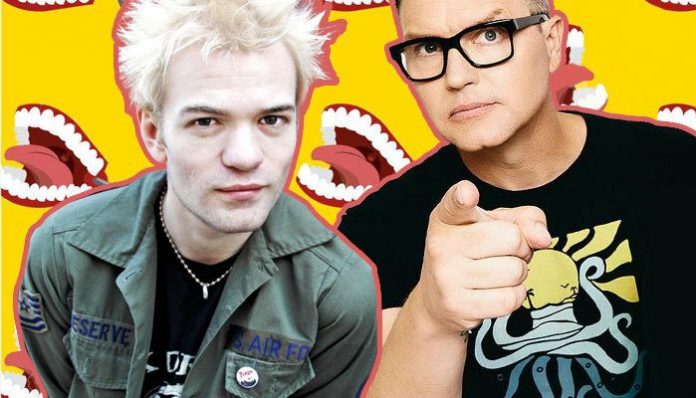 Lots of bands can effectively write an extremely clever lyric, but it takes a certain bold and confident self-awareness to truly pull off loud and proud dad jokes in a song. Not that many artists can get away with a melodic vocal in such a light manner (or the opposite, depending upon which unappreciative fan is listening and bitching about the “corniness” of said phrase on the band’s official YouTube page).

Whether or not the “Ugh, I tried not to laugh, but it’s so damn good” parental factor of a song lyric is intentional or not, a good dad joke on a track lasts a hell of a lot longer than a Facebook status or Twitter post and affects way more people. It’s a generous gift that keeps on giving throughout eternity.

Read more: 19 scene albums from 2005 you probably still have on repeat

We decided to list 10 lyrics that could be dad jokes below. Hell, some of them are practically grandpa jokes now, so enjoy ’em while simultaneously singing the words out loud. We’re not judging, and we can’t hear you, anyway. That was a dad joke.

Lyric: The entire song could be a dad joke

Let’s start things off with goofy punk/metal/hip-hop hybrid Bloodhound Gang. After this song, the Discovery Channel would never be the same. In a crazy twist of fate and time, the album this track is from turns 21 in October, making it the most “legal” listen on this list.

Lyric: “Why you gotta keep the fan on high when it’s cold outside?/Just want to let you know that I’m still a fan, get it?”

Eve 6 signed a major-label record deal while still in high school, so not many expected this self-aware dad joke on the band’s sophomore album, Horrorscope. Find us another song where the protagonist asks the listener if he or she “gets” the joke immediately after telling such. Think I’ll stay for a while.

Lyric: “Storming through the party like my name was El Niño”

Sum 41 introduced themselves to the world with a dad joke! The first line to their breakout single “Fat Lip” (from All Killer No Filler) is an actual dad joke, and the world hasn’t been the same ever since. But what would you expect with a conscience so small?

Lyric: “She’s the only star who’s touched my heart-on”

Lyric: “Here I go thinking about all things I could’ve done/I’m gonna need a forklift ’cause all the baggage weighs a ton”

Bowling For Soup’s dad-joke game has been on point at their hilarious live shows for over 25 years. The jokes don’t stop onstage, as singer/guitarist Jaret Reddick and drummer Gary Wiseman recently branched out to radio in podcast form on idobi Radio’s The Rockstar Dad Show. But I guess that doesn’t cut it.

Lyric: “Been looking forward to the future/But my eyesight is going bad”

This line probably could’ve been a Fall Out Boy song title, too. Just sayin’.

Relient K – “Must Have Done Something Right”

Lyric: “We should get jerseys ’cause we make a good team/But yours would look better than mine ’cause you’re out of my league”

Corny pickup lines are the best dad jokes on the planet. Don’t @ us. Relient K’s humble and wholesome blend of pop punk and pop rock is on full force in this song and killer opening line. We have got something real good going on.

Easily the most theatrical and quirky band on this list, St. Louis’ Ludo wowed audiences for nearly 10 years before they went on a hiatus in 2012. Thankfully, the band returned in 2018 and play special holiday shows every year since. FYI: This single should’ve been much, much bigger.

Lyric: “You tell your boyfriend, if he says he’s got beef/That I’m a vegetarian and I ain’t fucking scared of him.”

We’re onto the most quoted lyric in this piece, and you can trust us on that. Boulder’s 3OH!3 have been going strong since 2004, making the two-piece possible parental candidates for 16 And Pregnant at this point. “DONTTRUSTME” never could’ve come out in 2020. Shut your lips.

Lyric: The entire song could be a dad joke

Thirty seconds. There’s another dad joke for you.