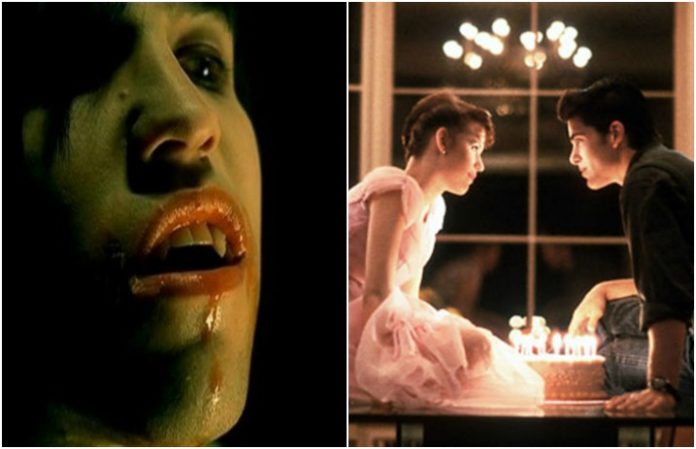 What’s better than music and movies? Music based on movies! Whether it’s your favorite lyrics or a whimsical song title, some of the best songs were inspired by movies.

Framing Hanley — “The Promise”
Inspired by: Eternal Sunshine Of The Spotless Mind

Framing Hanley frontman Kenneth Nixon gave backstory for this song while the band were touring in support of their sophomore album, A Promise To Burn. He explained that he was inspired by a scene from Eternal Sunshine Of The Spotless Mind. Jim Carrey’s character Joel says, “I could die right now, Clem. I’m just… happy. I’ve never felt that before. I’m just exactly where I want to be.” This inspired the chorus for the song.

The video for this song is jam-packed with references to cult classic horror films, but let’s focus on the title. The title is play on the ‘80s film Sixteen Candles and “Touch Me” by U.K. artist Samantha Fox. The band originally titled the song “A Little Less Molly Ringwald, A Little More Samantha Fox,” but we’re pretty big fans of the final title.

Panic! At The Disco — “Build God, Then We’ll Talk”
Inspired by: The Sound Of Music

P!ATD’s debut album is known for being whimsical, and this song takes the cake. We all remember seeing The Sound Of Music during our childhoods—or maybe we’re dating ourselves. Either way, “My Favorite Things” inspired the bridge to this song, but it takes a darker turn.

This track off of AA’s debut album, Stand Up And Scream, pays homage to the 2007 psycho-thriller Mr. Brooks. Never seen the film? The song is a four minute and nine second condensed version of a movie about a serial killer. The band even included two key phrases in the song that are important to the film: “The hunger returns…” and “I won’t kill again.” Listen to the song, watch the movie and get extreme chills.

A Day To Remember — “I’m Made Of Wax, Larry, What Are You Made Of?”
Inspired by: Night At The Museum

This ADTR fan favorite got its title from the 2006 family film Night At The Museum. In one scene Robin William’s character, Teddy Roosevelt, and Ben Stiller’s character, Larry, have a conversation. Roosevelt says, “Actually, I never did any of those things. Teddy Roosevelt did. I was manufactured in a mannequin factory in Poughkeepsie. I never shot a wild beast. I’m not even brave enough to tell that beautiful woman I love her. But you… you gotta finish the job this time. You can’t quit. I’m made of wax, Larry. What are you made of?”

With overly graphic and violent lyrical metaphors, this is one of the heavy hitting songs from Silverstein’s breakthrough sophomore album— Discovering The Waterfront. The song describes the difficulty of being in a one-sided relationship. “The title, which comes from the movie Closer, is describing how a heart looks like a fist wrapped in blood and is just an organ,” explains frontman Shane Told. “It doesn’t have anything to do with feelings and love. It’s meant to describe someone as heartless.” The 2004 film, starring Julia Roberts, Jude Law and Natalie Portman, is actually responsible for another quote you might recognize that Panic! borrowed as a title: “Lying is the most fun a girl can have without taking her clothes off.”

This classic A7X song draws inspiration from Hunter S. Thompson’s Fear And Loathing In Las Vegas… which technically is a book, but we’ll let this one slide. The video even replicates the film adaptation. The lyrics are nearly direct quotes, and the title even comes from Raoul Duke’s infamous quote, “We can’t stop here, this is bat country.”

Fall Out Boy — “From Now On We Are Enemies”
Inspired by: Amadeus

“From Now On We Are Enemies” mirrors themes from the ’80s film Amadeus, a period piece about Mozart. The title comes from the quote, “From now, we are enemies… You and I. Because You choose for Your instrument a boastful, lustful, smutty, infantile boy and give me for reward only to recognize the incarnation.” The song connects the band’s experience to Mozart’s, being young and talented, but wanted to be remembered for more.

Death Cab For Cutie — “Death Of An Interior Decorator”
Inspired by: Interiors

Death Cab was inspired by the 1978 Woody Allen film Interiors. The film is about an interior decorator, her attorney husband and their three daughters. The parents separate and the film follows the aftermath of the divorce. “Death Of An Interior Decorator” beautifully paints the picture of the film.

This one is a layered connection to a film. The title “Walcott” comes from a film that Vampire Weekend frontman Ezra Koenig made during college titled Vampire Weekend. This film’s main character was Walcott and the concept for the film came from the 1987 vampire film The Lost Boys.

Gorillaz — “Clint Eastwood”
Inspired by: The Good, The Bad And The Ugly

As the title would suggest, actor and filmmaker Clint Eastwood was in fact the inspiration for this song. The overall theme draws from the 1966 film The Good, The Bad And The Ugly, and is combined with a jazz feel.

Did we miss any? Let us know in the comments!