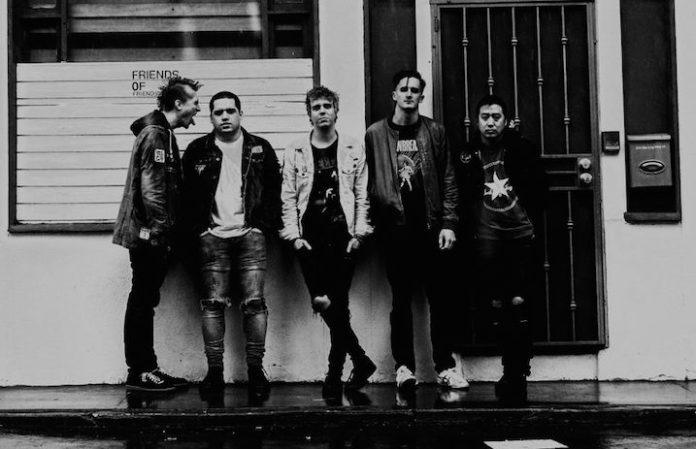 The White Noise: The aggressive rock band from Los Angeles that came into the scene in 2015 and quickly made waves. You might remember we featured their debut EP Aren’t You Glad? as one of our favorite EPs in 2016, and you know they released their full-length debut album this year (AM/PM) with their first single “Bite Marks” soaring the charts, hitting No. 1 on SiriusXM Octane Radio. But! Did you know guitarist Josh “KJ” Strock started off producing, writing and composing songs for other bands pre-the White Noise?

From Motionless In White to Crown The Empire, here are the songs you didn’t know a member of the White Noise was a part of.

“When I worked with the band, it was usually Mason [Gainer, guitar], Aiden [Marceron, drums] and I brainstorming what they wanted to create each day sonically. The band wanted to write a more alternative-sounding hard-rock song. Mason and I came up with the riff in the verse, and I helped him write the tapping lead that you hear over it. My idea for the chorus was to make a simple, two-chord progression that was layered with different guitar chords and production to give it a darker feel. Fran [Pastor, vocals] came to Drew [Fulk, producer] and I about wanting to write a song about feeling like she won't make it to 30, so hence the song was titled ‘30.’ This album was so much fun because we did some more retro-style production and combined ‘80s synths similar to Tangerine Dream with alternative/hard rock, almost punk elements.” — KJ

MOTIONLESS IN WHITE — “Queen For Queen”

“This was a song I was able to be in on the process of the tracking and writing for. I picked this song because it was amazing to see how much work Chris [Motionless] puts into his music. I helped write the breakdown with Chris and go back and forth trading guitar riffs. I had an enjoyable time being a part of their latest album.” — KJ

“I find some of the magic of songwriting is when you are in the moment writing a song and everything seems to piece together effortlessly. You hear everything you envision in your head come to life. Those songs become the most memorable. Drew and I already had in mind what we wanted to write sonically. We knew we wanted a song that felt emotional, introspective and epic. We are both very big on songs that begin with verses that immediately get to the vocals. As songwriters, we feel we complement one another well because I am very focused on the details of the music, like guitar parts, layering, guitar and bass tones. Drew focuses on the big picture of the song and does an amazing job making sure the structure and transitions are right, and that the song flows smoothly. With that in mind, I think our songwriting chemistry really shows in this song. Dave [Escamilla, former vocals] and Andy [Velasquez, vocals] discussed the song lyrically being about how they feel fans or people only know a specific version of them or what fans want to see, but they don't know them truly. I think with social media being a huge force in everyone’s lives, that theme can resonate with anyone.” — KJ

“This was one of the very last songs written for the album. We were missing another song that felt exciting and had a faster tempo. I already had a very rough skeleton of a song written. Drew, Brandon [Hoover, guitar] and I collaborated [on] getting the right guitar riffs for the verse and the right progression for the chorus. We thought this would be a song fans would love, and I wanted to make sure that even with the change of sound on this album, this song would stay true to what Crown (in my opinion) was known for: exciting parts and great, memorable choruses. My personal favorite part of this song is on the last chorus, you can hear the picked-out guitar melody that comes in. It’s something that I feel is signature to some of my writing.” — KJ

“This song is the very first song I had ever co-written for an album with Drew. It came about after I finished the first set of the White Noise songs. We thought it would be cool to make an album that had more industrial elements to it since no one was doing that at the time. This song is almost like if you combined Filter with Trent Reznor film score production and added a tinge of hard rock and metalcore.” — KJ

“This song is one of my favorites on their album. James [Barnett, guitar] and I would stay up until about 7 a.m. riffing for that album. James had the idea and the riff for the song already, and I helped him refine the progression just a bit, and I helped arrange the production that you hear in the beginning. In my opinion, Cane Hill is an insanely talented metal band, so all I try to do production-wise is pick sounds that will enhance and complement their sound. They are all about sticking to their roots of where they came from, so I used a lot more percussive and raw sounding production.” — KJ

You can catch the White Noise at Warped Tour all summer long. Here are all the dates.