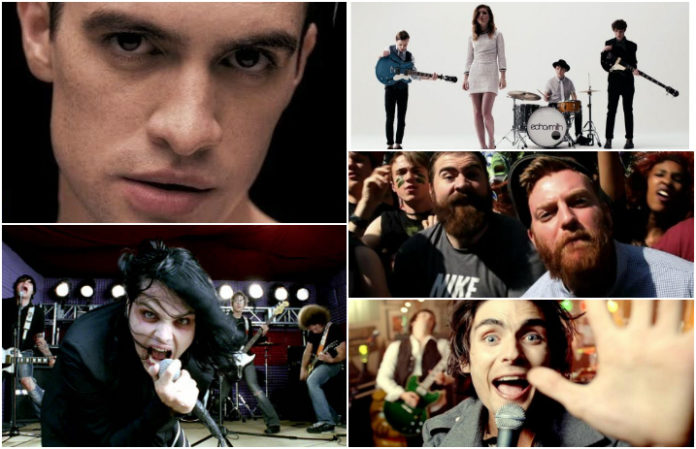 Over the past couple weeks, we’ve been gifted not one, not two, not three, but four music videos for Blink-182’s “Home Is A Lonely Place.” But don’t get it twisted: They aren’t the first band to create two or more music videos for one song.

My Chemical Romance – “I’m Not Okay (I Promise)”


My Chemical Romance give a behind-the-scenes look at life on the road with the first video for “I’m Not Okay (I Promise),” while the second version features a high-school-centric plot edited to look like a movie trailer. The latter was directed by Marc Webb, whose resume consists of everyone from AFI to Yellowcard and films such as (500) Days of Summer and The Amazing Spider-Man series. Webb returned to work with the band several more times throughout their career, including on “Helena,” “The Ghost Of You” and “Teenagers.”


Neck Deep re-released two versions of “December” from 2015’s Life’s Not Out To Get You, one with vocals from Dashboard Confessional’s Chris Carrabba and the other with Blink-182’s Mark Hoppus. Each track received its own music video as a two-part plot highlighting different aspects of one couple’s relationship.


All Time Low’s Last Young Renegade tour opener the Wrecks released a typical performance video for “Favorite Liar” soon after dropping the We Are The Wrecks EP last year. Before getting signed, however, the DIY act filmed a much different version of the video, complete with robot and bunny costumes they thought would never be seen until it was released last month.


Blink-182 released a video captured on 8mm film to add to the home movie-esque style for California single “Home Is Such A Lonely Place.” The band revealed in its description that it was the most simple video they have ever filmed because they were just at home with family and friends. Soon after, the trio each released their own versions of it, totaling four videos for the one track.


The 1975 released a vibrant and beautifully shot video for “Robbers” in mid-2014, but way before that, the band filmed a grungy performance complete with some vintage sepia tones.