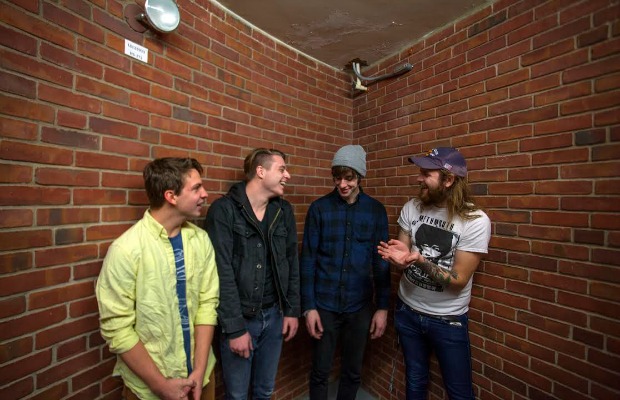 Sorority Noise are teaming up with AP to bring you their new single, “Using,” in which they crank up the grunge revival to 11. The song is from their new album, Joy, Departed, which comes out June 16 on Topshelf Records. Pre-order it now.

Stream the song below, and read a special message from guitarist/vocalist Cameron Boucher:

“In 2012, I saw a therapist for the first time. After fighting demons that expressed themselves in many forms, from suicidal thoughts to bottomless depression to pills, I found it was time to seek help. In 2012 I was diagnosed with manic depression. It took this moment in my life to realize that the thoughts that weighed me down since I was 14 weren't just there because I induced them, they were there because of a mental illness I had finally discovered. This knowledge both terrified and comforted me because it made me realize what I was feeling would be with me the rest of my life; but in that it provided a reason for me to find a way to make sense of it all.

It took me three years to come to terms with my illness, learn how to cope, and ultimately make it a positive part of my life, through which creativity could be my sword and shield against the parts of my brain that told me there was nothing but darkness. At 22, I can firmly say that I haven't defeated my depression, nor will I ever, but I have learned to come to terms with myself and make the best of what I have. I have realized that suicide is never the answer and that despite my trials, there is always a brighter end to things than the way I can typically imagine them.

Last week another one of my friends was overcome by their inner demons and committed suicide in New Haven, CT. Along with a number of things in my life, this prompted me to finally utilize the music I play to be a platform to let those who struggle with any mental illness and any drug problem know that it does get better. Death is a final question that should never require an answer, and there is so much of all of our lives left to help the world and help others that a simple leaving of this world is the opposite of what we should consider.

The song “Using” is the first song I've ever written that I felt took a positive focus on my life. It allowed me to look back into my life and realize every issue and every struggle I've faced and express my realization that no matter how unbelievably terrible things are and how low you feel as a person, there is no greater idea than accepting yourself for what you are and doing your best to make a positive impact on the world you live in. I'm going to continue to try and do my best, but I know that my past and present will continue to haunt me. I will continue to look for the positives and future that I might be able to experience that I didn't think I would have three years ago.

Catch the band on tour all summer.