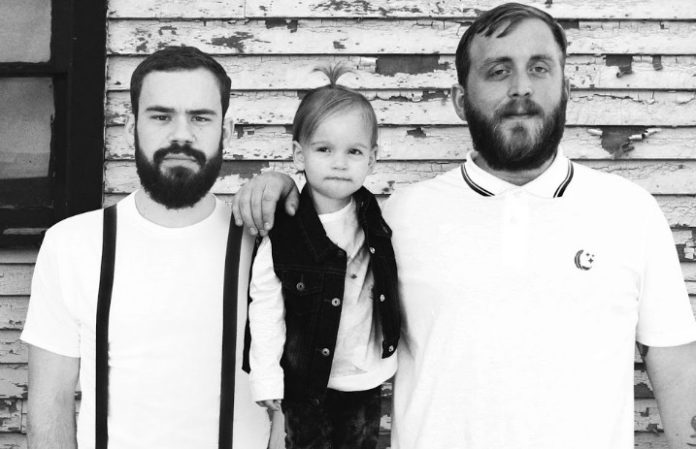 No matter what your favorite pop-punk band says about staying young forever, one day every scene kid wakes up to discover they’re a kid no longer. For many, that realization arrives in the form of a kid of their own. But growing up doesn’t have to mean giving up what you love. Just ask Casey Cole and Peter Lockhart, the duo who have carved out a niche as punk’s resident lullaby experts, Sparrow Sleeps.

Sparrow Sleeps found its genesis in Cole’s own experience as a new father. “I had my daughter, Sparrow Lucille, a little over two years ago,” Cole says. “We got home from the hospital, and I was looking up lullabies I would be familiar with online.” Coming up largely empty, Cole took matters into his own hands. “I was listening to a lot of Saves The Day at the time,” he recalls. ”I started composing my own renditions of Saves The Day songs on bells and putting Sparrow to sleep to them. She was little, she’d wake up every couple hours, and I’d rock her back to those.”

Those Saves The Day songs (now collected as Can’t Lay Down) begat versions of Taking Back Sunday tunes (Quieter Now), Jimmy Eat World tracks (Chase The Nightlight) and, eventually, more than 20 additional albums compiling lullaby-style renditions of punk and emo faves. Along the way, Cole brought friend and graphic designer Lockhart on board as Sparrow Sleep’s art director—Lockhart’s exquisite riffs on scene classic album covers are the cherry atop the group’s sundae.

“I think this project is weird and unique because it affects the kids in a good way,” notes Cole. “It gets them into music at a really early age—but it also helps the parents out, to the point where waking up at three in the morning to bottle feed is not that bad. I get emails from parents with pictures of their kids sleeping on their laps, being like ‘oh my gosh, we just downloaded your Alkaline Trio album and it works!’”

Sparrow Sleeps make a point of reaching out to the artists whose songs they intend to cover. “It kind of adds to the legitimacy of the brand,” says Cole. “It shows that this is a benefit to the community. We aren’t just trying to take something and run with it, we’re working with the artists.” It’s a strategy that’s turned the artists they’ve worked with—many of whom are parents themselves, including MxPx’s Mike Herrera, Say Anything’s Max Bemis and Thrice’s Riley Breckenridge, —into the project’s biggest boosters.

Anthony Raneri has nothing but raves for Sparrow Sleeps’ album of Bayside covers, Calm, which we’re excited to premiere today. “I'm especially impressed that they are able to keep the special elements of a song in tact while obviously changing how it sounds so drastically,” he tells AP via email. “Some of the Bayside songs they did are real dark, and I think it's cool that they maintained the vibes. Kids shows, music and clothing can be pretty unbearable. Things like Sparrow Sleeps are great because it gives us something that is mutually enjoyable to have with our young children.”

For Raneri, it’s more than just their skill at reimagining his band’s hits that makes Sparrow Sleeps invaluable—it’s about the way the project serves and fosters the punk community. “When I was about to become a dad, one of the million things that I was worried about was trying to relate to other parents, teachers and other people that would be important in my daughter's life,” he says. “I think I speak for a lot of parents when I say that the ‘market for unconventional parents’ is greatly appreciated.”

For the duo, that market remains largely untapped. As Sparrow Sleeps grows, Cole and Lockhart believe the key to success is to stick to the project’s guiding principle from the start: placing fandom first. “This is a lot of what we listen to—the same things that we listened to 10 or 15 years ago,” Lockhart notes. “But as you get older, what you listen to always evolves. I think we’re open to doing anything in the long term.”