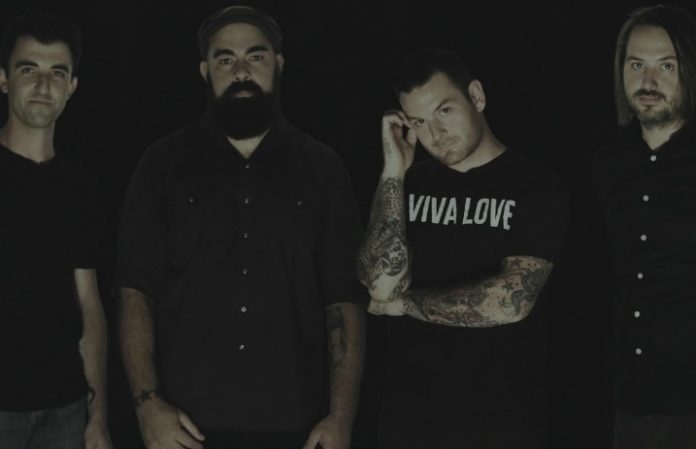 Senses Fail frontman Buddy Nielsen piqued the interest of many back in May when he tweeted that he and members of Finch had formed a new band, Speak The Truth, that “sounds like 2002.”

Well, now we can all finally hear for ourselves. The world is getting its first taste of Speak The Truth with their debut single, “Crash My Car,” and AltPress has an exclusive first listen. The track comes from a self-titled seven-inch (you can preorder it here), which they are releasing through Bad Timing Records. We also caught up with Nielsen to talk about the band’s creation, giving fans what they want, not being bogged down by expectations and what the future holds for this supergroup.

Along with Nielsen on vocals, Speak The Truth Even If Your Voice Shakes is drummer Alex Pappas and guitarists Alex “Grizz” Linares and Daniel Wonacott. And no, they don’t have a bassist yet.

Can you start from the beginning? Where STT spawned from, what inspired it and how it all came together?
BUDDY NIELSEN: I think [Senses Fail] were supposed to do a headline tour in the spring last year that we had to cancel. We never announced it, but it was with Finch. We had some issues: We had some things we had to deal with on our end and we had to cancel the tour. But they kind of hit me up after, since they were planning to go on tour. They were like, “Well, we’re not doing this tour, I guess Buddy’s not touring either.” They weren’t gonna be really active with touring and they wanted to play, so they were like, “Well, maybe we should ask Buddy if he wants to be in a band. So they sent me an email, “Hey, you wanna write some songs?” and they sent me a couple things they’d worked on. You know, I’ve never really done another proper band, I’ve only been with Senses Fail. I thought it’d be a cool opportunity to try something different but with some people that I knew. I thought we had a cool opportunity to maybe make something that took the best of both bands [and] put them into one.

That definitely comes across in the music. It’s totally a mix of early 2000s Senses Fail and Finch.
Yeah, that was sort of the goal. Everyone’s always asking Senses Fail to sound like they used to and always asking Finch to sound like they used to or to put out some music. We figured, well, what if we sounded like a super mix of old Senses Fail and old Finch? I wonder if people would like it. What would it sound like? Can we do it? Can we make it sound old but also new at the same time?

It sounds like your goal was to give it that nostalgic element and give fans of your bands what they wanted to hear.
I think that was the goal. The goal was let’s do what people want, but also what we want to do because there’s something weird about going backward in your own band. But when you do something new, it doesn’t necessarily feel like going backward. It feels like you’re starting something new and thinking these are the best aspects of these bands. People like both these bands, let’s put them into one and see where it goes. You know we could end up playing one show, we don’t really know, there aren’t a ton of expectations. We don’t really know how it’ll be received.

Give people a little insight into the first single, “Crash My Car.”
I got way into Morrissey recently, which is weird because I hated [him] for most of my life, but four years ago—I don’t know what happened. It’s a tongue-in-cheek sort of way of saying when you do everything for a relationship—and this isn’t necessarily an intimate relationship, but any kind of relationship—when you’re the one doing everything for a relationship, it can kind of feel as though you’re almost like a martyr. You’re constantly martyring yourself for the good of the relationship. That’s why the chorus is a very tongue-in-cheek, “I’d do anything, even kill myself, just to make you happy.” In a grandiose, over-the-top, Morrissey -type way. Just a very over-the-top, grotesque, way to say we’re in relationships all the time and a lot of times relationships are one-sided. Only one person is truly committed. It’s reflecting on a couple of different relationships I’ve had with different people in my life.

And what about “Go For The Throat”?
It’s sort of reflecting on what the whole point of the band was. It’s difficult when you have a band that you’re starting and people already might have a predisposed notion of what it’s gonna be or should be, what it can’t do. I think there’s some level of apprehension of, are people gonna think it’s lame? Is it lame to be in your 30s and starting a new band? There was a little bit of apprehension—and there still is—of, “Is it lame for us to be doing a Finch/Senses Fail supergroup in 2016?” It reflects the song. I don’t want to say heavier, but it’s one of the more aggressive songs. It’s just sort of about your past as a band or someone who’s a public figure and always gonna be a part of whatever you’re doing. Everything any of us will do will be compared to what was successful about Senses Fail. So it’s almost as if you’re always having to live up to the hype or lack of success. So if it’s not successful, people will deem it, “Well, you know it’s washed-up, nobody wants to hear that, those dudes are old.” Or if it is successful, it’ll compared to the good Senses Fail record. So it’s kind of an invitation to just go for it and not really have expectations for what we’re gonna do.

Is there anything else you wanted to touch on with Speak The Truth?
I think the name is super-interesting because it’s from a woman named Maggie Kuhn. She was a feminist but also an ageist, someone who was fighting for people’s rights as they get older. As you get older, your rights are somewhat taken away and the way you’re viewed is different. And that’s something that was a perfect way to describe the band with some older guys. But I love the quote on its own, too. “Speak the truth, even if your voice shakes.” I think that that says a lot about where I’m at in my life. But then when you peel it back a little further, who’s giving the quote and what she was talking about, what she stood for, also resembles what we’re doing. There’s still a ton of life left and there’s still a ton of music left. And these bands that existed in this era had really come and gone. I think that there’s a void and that’s one of the reasons we decided to do this. A lot of the bands from that day are either not playing the same music anymore or they’re calling it a day. Maybe we can fill the void about what people liked about their youth. alt