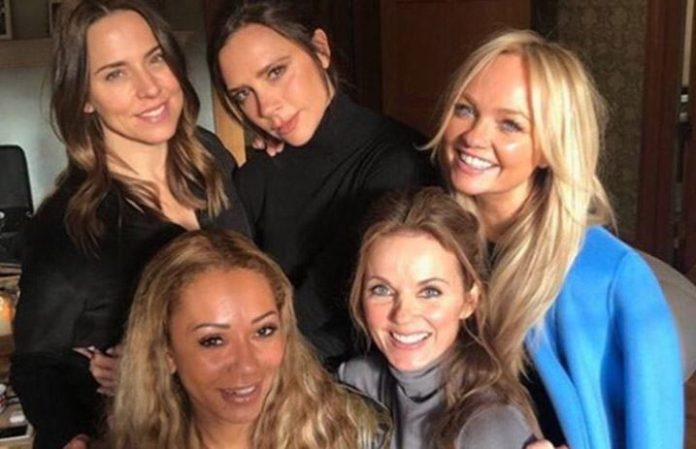 It looks like we finally got what we want, what we really, really want.

The biggest selling girl group of all time, the champions of Girl Power, the five-piece who had us saying “zig-ah-zig-ah” all through childhood have finally returned!

Rumors of a potential Spice Girls reunion sparked early Feb. 2, when Victoria Beckham, Melanie Chisholm, Melanie Brown, Geri Horner (Halliwell) and Emma Bunton posted photos together for the first time since the 2012 London Olympics. The internet quickly started buzzing with excitement. A photo of the girls embracing Simon Fuller, the marketing genius behind the group surfaced within a few hours, and suddenly Posh, Sporty, Scary, Ginger and Baby were back in our lives in a real way.

There is little information about what this Spice Girls reunion will entail, but if history is any indication of what’s to come, then we can confirm that it will be some laugh ‘til it hurts, dance party, girls-night-out-level fun.

Allegedly, a new greatest hits album, TV deals and endorsements are on the horizon, with early conversations of a tour taking place (please, oh please be true).

So why is 2018 the best time for a Spice Girls reunion? With the band’s 20th anniversary behind them, why did they choose right now? Well, we have to take a look back into the pop culture history to fully uncover that answer.

Grab your chupa chupas, your Polaroid cameras and your love of T.G.I.F.; let’s go back to the ’90s for a minute, shall we?

When the Spice Girls first came barging into the music scene in the mid-1990s, the industry was saturated with boy bands such as Take That and East 17 (the British equivalent of Backstreet Boys and *NSYNC). There weren’t any girl groups rocking the scene. No one was doing what the Spice Girls were doing, not at all—and certainly not with the confidence, pizazz and platform shoes that they were.

The Spice Girls triumphantly broke numerous records and became the fastest selling English group since the Beatles. From “Wannabe” to “Say You’ll Be There,” to “Spice Up Your Life” and “Stop,” they dominated radios and television sets across the world, lit up hundreds of stages and most importantly, connected to young, developing girls (well, mostly girls, much love to the Spice Boys out there). The Spice Girls didn’t just preach girl power; they were Girl Power.

In an era where the feminist movement was pretty hush hush save for riot grrls in the underground punk scene, five English girls from all different walks of life stood loud and proud, setting an example for women everywhere. They reminded us that it was OK to be different. Hell, it was great to be different. Own who you are; be fun; be outspoken; be sexual; be you; don’t take life too seriously; love yourself; support others. This was the Spice Girls mantra.

One of the greatest accomplishments of the Spice Girls was their commitment to each other. The Spice Girls showed us exactly what genuine, non-competitive female friendship looked like. And it was within our mutual adoration for this band that we were able to connect to our peers in a more honest way.

“If you wannabe my lover, you gotta get with my friends/Make it last forever; friendship never ends.” This simple but valuable sentiment of showing appreciation to the people who unconditionally love you, the people who made you, it was right there in their first chorus.

But it wasn’t in just their lyrics that they carried this message. It was in how these vivacious women conducted themselves. They encouraged fans to be individuals who made their own rules to live by. They reminded us that being strong and staying true to yourself was far more important than the approval of any man. They certainly practiced what they preached when their manager wasn’t giving them the freedom that they stood for. So what did they do? They sacked the guy and divided his responsibilities five ways. Now that’s Girl Power.

The Spice Girls carried a playfulness and positivity that was so admirable it was contagious. They were more than a band; they were a movement. Their message became as vital to their success as their unique flavor of pop music.

So this brings us to today. 2018. The Spice Girls reunion we’ve waited so long for.

We can’t help but notice that the reemergence of this group arrived in a moment in which women everywhere are putting their fears aside, speaking their voices and saying “me too.” This is such an important moment for female empowerment, and it seems that the girls are fully aware of this.

The official joint statement from the Spice Girls posted at 3:22 p.m. across social media Friday read:

“We have enjoyed a wonderful afternoon catching up and reminiscing about the amazing times we have spent together. We are always overwhelmed at how much interest there is across the whole world for the Spice Girls. The time now feels right to explore some incredible new opportunities together. We all agree that there are many exciting possibilities that will once again embrace the original essence of the Spice Girls, while reinforcing our message of female empowerment for future generations.”

As always, the Spice Girls are doing what they want, and they’re doing it on their own terms. But they’re also doing it because they are exactly what we, as a society, need right now.

This Spice Girls reunion will be an opportunity for a generation of 20 and 30-somethings to watch a group who instilled values of self-empowerment, togetherness and strong, female friendship to take it all full circle. They have returned to our lives during a cultural revolution in which women are speaking up against their abusers, quieting the silence and standing for one another.

Call it Girl Power, call it Time’s Up, call it what you want to call it, but this time in our history is so powerful. We must continue to support each other through the good and bad, to fight for our truth, to seek change and stand for what’s right. If we are able to continue to do this, then we will successfully live out the positive values at the very foundation of the Spice Girls.