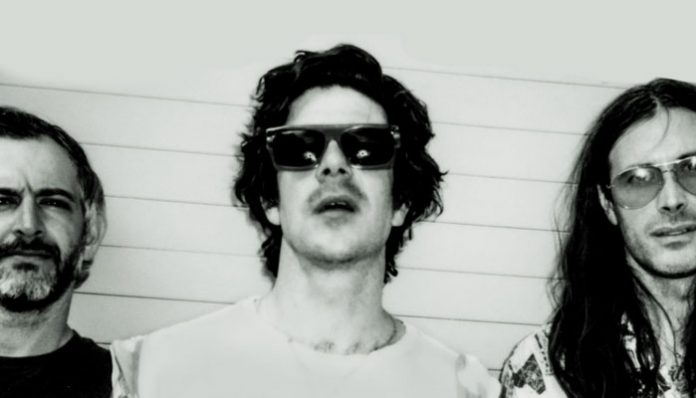 The pandemic is beating the hell out of anybody who makes their living in the realm of live music. But those very microbes are inspiring for people who want to start virtual bands and practice on FaceTime. Perhaps you couldn’t care about either scenario and just prefer to get shit done. And now we’d like to introduce you to Spiral Heads, whose new video for “Nothing New” we’re premiering today. Call it buzzsaw pop or high-spirited indie-punk. We’ll just say it’s one of the best things you can experience in 104 seconds.

The pandemic hasn’t stopped these gents from rocking. Spiral Heads are a trio with social distancing already built-in. Longtime buddies vocalist/bassist Simon Doom (MGMT) and guitarist Jim Carroll (American Nightmare) call Brooklyn home, while drummer Q (Doomriders) pays rent in Boston. So while band practices on a whim aren’t easy, the spirit comes naturally. For the making of the video, Doom and Carroll set up a strobe light and a bed sheet in their rehearsal space. They filmed their footage on an iPhone and shipped the footage (along with aforementioned bedding and lighting) to Q, who set up and filmed himself playing. Q edited it, Doom mixed it and now “Nothing New” is out into the world. It’s manic, melodic and straight to the point. What’s not to love?

Doom indulged Alternative Press with a little shoptalk regarding band names, punk rock and getting shit done way ahead of and right on time.

What’s the significance of the name? I think it signifies somebody’s head/mind unraveling. It would also look good on a kick-drum head.

When we first started practicing, I was dead set on calling the band the Ice Cream Cones. I wouldn’t budge from my position and refused to hear any other options… until Jim suggested Spiral Heads. I was like, “That’s way better.” It has an ’80s skateboard company vibe and also implies that you can use both spirals and heads in your artwork. Don’t worry: I started another band called the Ice Cream Cones this year.

You finished making “Nothing New” just under the wire before social-distancing measures were being taken. Did that awareness give the proceedings a psychic urgency the band may not have had previously?

I think the fact that Q lives in Boston, while Jim and I live in Brooklyn, means that we were already a naturally “social-distanced” band. Whenever Q comes to town, or Jim and I go to Boston, we basically try to work our asses off and make the most of the little time we have together. However, I do think there was this feeling in the air already that some shit is about to go down at the beginning of this year. I was supposed to go on an MGMT tour in mid-March, and there were already mumblings about possible cancellations by the end of February when we recorded the EP and made the video. So there was a bit of “now or never” in our approach. Instead of waiting for a studio, we just recorded the songs ourselves in my rehearsal space.

Spiral Heads have distilled a cool alloy of snotty garage rock with buzzsaw pop punk a la Buzzcocks. It’s something completely different from your other bands. Are Spiral Heads the equivalent of a poker night with friends? Or are you looking to pursue it with the same kind of get-in-the-van vigor that this kind of music practically demands?

I can’t fully speak for Jim and Q. But I would believe that all three of us have always wanted to be in a band like Spiral Heads. The sound was intentional. It didn’t just happen. I remember Jim mentioning to me at the beginning of 2019 that he and Q were talking about starting a melodic, Ramones-y punk band. And that sounded like heaven to me.

I had been writing those sorts of songs forever and never found a project that could make them work. While Jim and Q had always been in relatively punk/hardcore adjacent bands, I hadn’t really played anything that could be considered “punk” since high school. And even that was crust punk. It’s just something that we knew we were good at but never pursued because we were either running away from “punk” or “melody.” I remember the feeling of relief after our first rehearsal. It was like, “Fuck, yes… finally.” And the sexual chemistry… ooooh bay-bay! We would get in the van, but only if we could play poker with our friends.

How do the band function as a Brooklyn/Boston axis in the age of COVID? Are you swapping files, practicing via FaceTime? What’s the future hold?

Being the cautious prophets we are, after we finished tracking “Nothing New” and “What’s Going On In Your Head,” we recorded drums and bass live for all the other new songs we were working on just in case there was a pandemic and we wouldn’t be able to record for a while. We basically have foundations for something resembling a full-length that we have been adding to over the past few months. No FaceTime practice, but we also did a full quarantine acoustic song. It’s good! It sounds like “That’s Entertainment” by the Jam.

If we found a time machine, would Spiral Heads prefer to go back to late-’70s Boston to open for DMZ? Or set it to the U.K. to be the first of three opening for the Jam in some dank club? Explain your decision.

Despite mentioning a Jam song in my last answer, I would rather not be in a dank basement being “gobbed” on by scrawny beer-soaked mods while the Exploited Barmy Army wait outside to thrash us once the gig comes to an end. That being said, I don’t wanna be in Boston in the late ’70s, either… and that is more than a feeling! I guess I would rather be in Melbourne in 2010 opening for Eddy Current [Suppression Ring]? Osaka or Gothenburg in the ’80s? Chapel Hill in the ’90s? New Zealand in 2020?

Check out Spiral Heads’ quarantine-crazed punk in “Nothing New” below. And go preorder their new EP right here. Because great rock is all in the timing.