13 ‘SpongeBob’ moments as your favorite bands

Here’s to 20 years of living in a pineapple under the sea.

The only thing separating Squidward and Misfits’ Doyle Wolfgang Von Frankenstein is the classic devilock haircut. The only question remaining is who’s been hitting the gym harder? (Our bet is still Doyle.)

SpongeBob doing his hitchhiker dance is straight out of blink-182’s Dude Ranch photo shoot. It’s already established that Tom DeLonge believes in mermaids and mermen, so would a sponge living in a pineapple under the sea be that much further?

Krusty Krab pizza not only epitomizes a band but an entire genre as a whole. Do pop-punkers really love pizza? Maybe, but so does everyone else. Especially if it’s a Krusty Krab pizza, which is the pizza for you and me. (We’re still waiting for that song to get covered.)

If Awsten Knight had his own sandwich, it would definitely be a Pretty Patty. The real question for Waterparks, though, is what flavor the orange one would be?

Sandy gets a little homesick in that episode, but sadly doesn’t jam out to “Ohio (Come Back To Texas.” Either way, we’re now convinced Bowling For Soup wanted Sandy to come back to Texas. If only Bikini Bottom was located in Ohio, that would actually make sense. 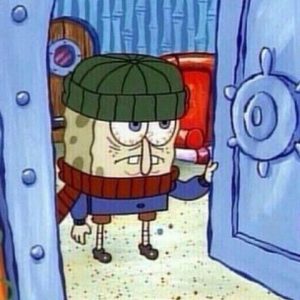 Seen here doing his best sad pop-punk impression, SpongeBob perfectly encapsulates Boston Manor’s vibe. Between the puppy-dog eyes and the staple low-ride beanie, it looks like he would be immediately welcomed to the neighborhood.