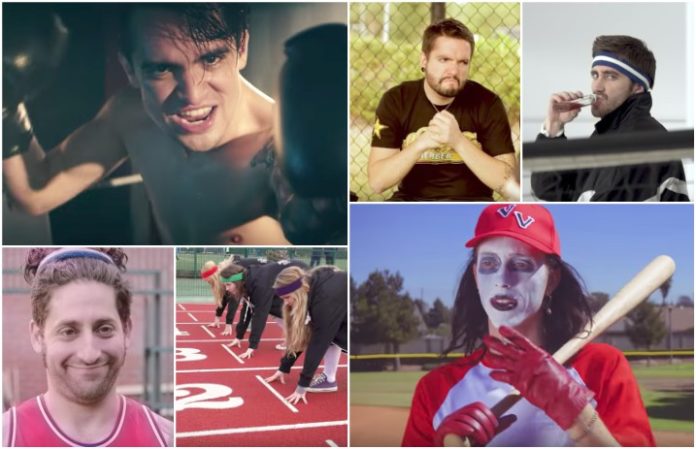 With football season underway, now seems the perfect time to take a look at some of the best sports-related music videos in the alternative scene. Here’s our list of MVPs.

Read more: Competitive tag might be your new favorite sport

It’s a classic game of red vs. blue with a twist for this eclectic L.A. punk act consisting of twin brothers Wyatt and Fletcher Shears. The duo, which signed to Epitaph Records in 2015, dabble in grenades and heat-seeking homerun hits with their latest single.

The first of three video installations for this song, the men of FOB take it to the court to duke it out with some pro players, while definitely dressing for the occasion (the ‘80s called, they want their shorts back). Nonetheless, we get a good laugh out of their efforts.

Speaking of the ’80s: English indie rockers Band Of Skulls go retro with their slo-mo take on a bowling tournament. Things heat up when a troupe of luchadores in business suits challenge the reigning champs, The Pin Heads, but the top team still manages to pull through in the end.

Is there anything P!ATD frontman Brendon Urie can’t do? Not only is he an amazing singer, actor and performer, but apparently he’s also a regular John Lawrence Sullivan. Both in and outside of the ring, he conquers all, from ex-girlfriends and helping the elderly to even losing a dodgeball match.

Legendary Canadian pop-punks Sum 41 get physical by going off the deep end… literally. A parody of the classic Rodney Dangerfield flick Back to School, the band takes on a team of high school jocks in Speedos the only way they know how: through comedy and rock ’n’ roll.

What do you get when you cross three Bay Area punks with a football field? Complete and utter chaos. With an obvious nod to the Green Bay Packers, the trio gear up for their biggest game to date – against their own fans! Watch as frontman Billie Joe Armstrong gets tackled and bassist Mike Dirnt dramatically sprains his ankle.