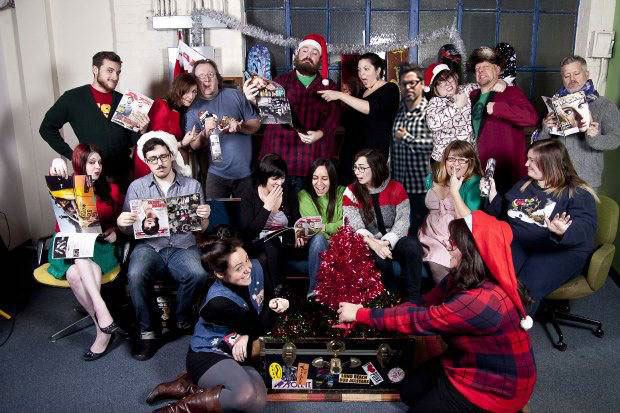 2012 was a pretty good year. The world didn’t end (at least not yet), and Rush finally made it into the Rock And Roll Hall Of Fame. Along the way, a bunch of other stuff happened—music-related and otherwise. But what fun is looking back? Here at AP, we’d much rather look ahead to the upcoming year, and 2013 will be a big one for the magazine. (In JUNE, we’ll publish our 300th issue.) From new music to more pizza, here’s what the AP staff are excited for in 2013.

1. I'm not a big movie guy, and I'm not a big Ryan Gosling fan. I mean, he seems like a fine actor and his abs are great and all, but his band, Dead Man's Bones spook-tacular first release became one of my favorite records of the past five years. The self-titled album came out in October of 2009, and I've played it on a loop each Halloween season since—and often throughout the year. I don't know if it's in the works, but I would love for him to throw down a DMB sophomore release (and tour behind it). Maybe this Halloween?

2. I may have been at AP a tad bit longer than you've been reading, but around the early/mid-2000s was a weird and wild time in AP's growth. It was not unusual for us to cover all kinds of entertainers, not just rockers. We covered and discovered up-and-comers like Zach Galifianakis (AP 221), before he was anyone. Around the time of split-cover stories on Thursday/Thrice we actually got access to stars like Joseph Gordon-Levitt (AP 178), Jessica Biel (AP 184), Elijah Wood (AP 186) and scores more before they got “mega!” With the introduction of some new young staffers here, I'm stoked to hear rumblings around the AP Compound of interest in expanding back into some entertainment/lifestyle coverage. Music will always be our No. 1 obsession, but it's not the only thing we geek on!

3. Anchorman 2, Ironman 3, Hangover 3, Star Trek Into Darkness and Thor. It's looking like a man, man, man's world! At least it'll keep them out of your hair for a few hours.

Leah Blowes, Traffic Coordinator
1. The movie A Glimpse Inside The Mind Of Charles Swan III. Any combination of Jason Schwartzman and Bill Murray warms my little black (and ironic) hipster heart.

3. The final eight episodes of Breaking Bad. I’m dying to find out what Hank does after finding the Walt Whitman book.

4. Season three of Shameless. It's been so long since season two, I can't even remember what happened anymore.

4. My sister's wedding. (Mainly because I'm sick of talking/hearing about it.)

5. A whole new year of concerts to attend.

Billy Graves, Production Assistant
1. I'm excited to go to the Fest for the first time.

2. I'm excited to graduate college and eventually move to Cleveland.

3. I’m excited for This Is Hardcore Fest and Warped Tour.

2. On that note, attending my first-ever WrestleMania (alongside Soupy from the Wonder Years, natch) and hopefully making CM Punk my best friend while there.

3. A new Weezer album, pretty please? Even if it sucks, I still want to hear it. I mean, shit, I bought Raditude on vinyl. RADITUDE. I'm the ultimate Weezer apologist.

4. My first wedding anniversary. Being married rules, you guys.

5. The 300th issue of AP—now that's something you can hang your hat on.

6. Knowing that I'm going to hear music that will blow me away by bands that I don't even know about yet. That's the kind of stuff that really gets me jazzed on life.

Cynthia Luna, Office Assistant
1. I'm looking forward to seeing how long it takes for Taylor Swift and Harry Styles from One Direction to break up. Her next album should be real good. (In all seriousness Red is great.)

2. I'm looking forward to more pizza in my life.

3. I'm looking forward to any movie Joseph Gordon-Levitt is in.

Dawn Marshman, Marketing Director
1. Finally getting air-conditioning in my office.

2. The Cleveland Browns making the playoffs. (Maybe, that should go on the wish list…)

3. All the babies my lady friends are having.

4. Reading Festival–hoping to make it!

Brittany Moseley, Associate Editor
1. The 10th anniversary of Say Anything’s …Is A Real Boy. At their Columbus, Ohio, show in October, Max promised they would do a tour and play the album in its entirety. I’m holding him to it.

2. Captain America is filming in Cleveland. I always love to see cool things happening in my city. Plus, the thought of running into Chris Evans at the grocery store or Starbucks is pretty appealing, too.

3. I can’t wait to finally see Texas Is The Reason in concert. I was eight when they released Do You Know Who You Are?. By the time I was old enough to appreciate them, they had already broken up. So basically, I’m living out my inner ’90s-emo-kid fantasy.

4. Celebrating my one-year AP anniversary in June. (Here’s hoping they keep me around until then and don’t kick me out for playing Alanis Morissette’s entire catalog extremely loud.)