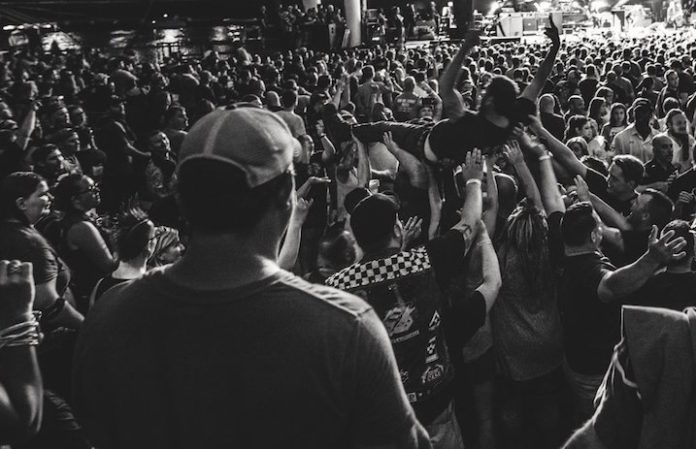 Even people who don’t listen to hardcore and metal know what happens at those kinds of shows. Moshing, stage diving, head walking: These are staples of the heavy rock genres’ live performances. Hardcore, especially, has a reputation for being physically taxing. Riots have even been known to break out at such shows, especially in the early days of the genre. Today, hardcore isn’t quite as dangerous, but shows can still be a rough environment. And it’s not a secret.

So why are hardcore shows so dangerous? Listen to the music, and you’ll get your answer. When you listen to a band like Every Time I Die, do you imagine sitting in a field of daisies? Probably not.

Read more: We asked a security expert how to be safer at shows

The reason that moshing and stage diving are so integral to the genre is because that is what the music evokes. Fans like to wild out at these shows. It’s not just about the auditory or emotional experience, but the physical one. People who enter the moshpit or insert themselves into the thick of the crowd know that intense physical activity is part of the deal. Actually, getting bruised and battered at a hardcore show is even a point of pride for many fans.

This is especially important when considering the recent Every Time I Die news, wherein guitarist Jordan Buckley has been sued by a showgoer who sustained a concussion and a neck fracture because of his stage dive. As a point of contrast, in November 2014 there was an ETID fan who got several teeth knocked out during one of the band’s shows in Pomona, California—and he was happy and smiling afterward. I, personally, have been trampled and knocked unconscious while attending an ETID show, and when I came to, I made security let me back inside to enjoy the rest of the set. This isn’t just about ETID, either. Countless hardcore bands have put on countless shows that have resulted in injuries. Some people have gotten angry about it and have taken a legal stance, while others have simply brushed it off like this Vein fan who also got her teeth knocked out at a show.

ETID shows are a safe place, where everyone has fun and takes care of each other… even though it may not always appear that way �� Who's ready for Pomona round 2??

Of course, no one wants to lose their teeth or be knocked unconscious or break their neck, but those are the risks the hardcore fan takes when knowingly putting themselves in that environment. The fact is that this genre is unruly. There has never been any pretense that tried to suggest otherwise. ETID even advertise that experience with the above Instagram post. When you walk into a music venue where your favorite heavy band is playing, you effectively consent to the possibility of getting injured. It’s a kind of social contract. In the case against Buckley, he did not need to issue a warning (which is part of the injured party, Tonya Ross’, argument) that he was going to stage dive. Everyone already knows that it is very likely for a guy in a hardcore band to fling himself into the crowd. If you don’t want to get hurt, get out of the danger zone.

For these same reasons, it is also nonsense to consider banning stage diving entirely. A recent Digital Music News article, “Why Music Venues Should Ban Stage-Diving,” calls for just that, citing quotes from an earlier Noisey article that asked various musicians to weigh in on the matter. Some said that it is the job of the performer on stage to make sure everyone in the crowd is OK. Others, like Say Anything’s Max Bemis, said that it is not up to the band to “police their audience” and that stage diving is a “healthy expression of having fun at a show.”

If a person doesn’t want to engage in such activities, they don’t have to. If they do, they should retain the freedom to do so. There is always a place for someone who is not willing to put themselves in harm’s way to avoid the chaos. Besides, do you really think that banning stage diving would stop some of these bands from doing it? Part of the point of punk and hardcore is to challenge the rules and upset the established order. Jumping and throwing your body around is part of that expression. It has been there since the genre’s inception, and it will remain there. So when you attend a show, take responsibility for yourself. Be aware of your surroundings and make decisions that you will be OK with later. And don’t seek to ruin others’ show experiences because you didn’t think it through.