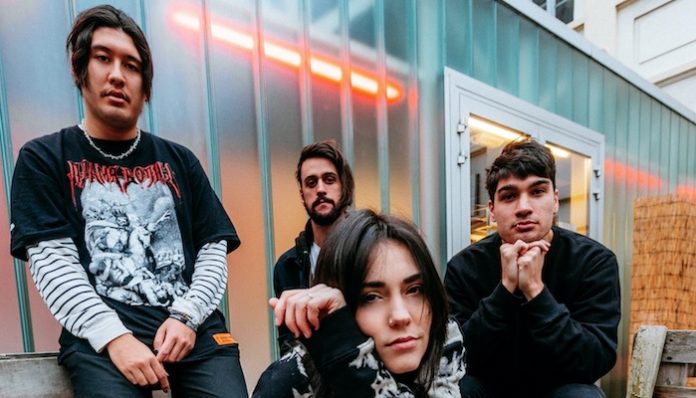 On March 18, Sydney-based band Stand Atlantic put out a call to fans on Twitter. Prospective participants were told to send their name, age and the city they live in to the email address provided in the tweet and await further instruction. Fans joked in the replies, asking if they should send along their credit card information and social security number while they’re at it. Luckily, the band’s request wasn’t part of an elaborate identity theft scheme but rather a special video project for their latest single, “Drink To Drown.”

Over the course of the song’s three-minute video, over two dozen Stand Atlantic fans from all around the globe, from Atlanta to New Zealand to Slovenia, showed off how they plan on spending their time in indefinite self-isolation due to the recent coronavirus pandemic. Some are setting goals to reach creative milestones they’ve been putting off for a while, and others are attempting to master the art of kombucha making. Lead vocalist/guitarist Bonnie Fraser, who’s currently isolated in the U.K. while the rest of her bandmates—drummer Jonno Panichi, guitarist David Potter and bassist Miki Rich—are in Australia, is using this time to unite fans around music.

“We thought that we would get everyone involved since we’re all in this together even though we’re all separated,” Fraser says. The call for submissions for “Drink To Drown” received over 5,000 entries from their enthusiastic fans that then needed to be sorted through. Fraser opted out of the process on the basis that she’d want to include everyone, joking, “I don’t think people are going to watch 10 hours of people sitting on their butts doing stuff in their house.”

Panichi took on the task alongside videographer Brandon Lung, who edited the clips together. “I made sure to get a wide variety of age groups, and we tried to get as many different countries and cities as possible, as well as trying to include the OG day one fans,” Panichi says. One of the video’s standout moments features a 13-year-old boy blowing out the candles on his birthday cake, wishing for coronavirus to go away so he can have a party with all of his friends. It’s a tender moment that, when paired with the somber message of the song, encapsulates the feeling of the present state of the world.

“The song itself is about not really knowing where you stand. It’s a concept [of uncertainty], and that’s reflective in how we’re living at the moment,” Fraser says of “Drink To Drown.” Following up “Hate Me (Sometimes)” and “Shh!,” this marks the band’s first release since deciding to push back the launch of their upcoming sophomore album, which they were set to start promoting in just a few weeks. Once tour and festival cancellations started rolling in and traveling became increasingly risky, it didn’t feel right for the band to continue as though life were business as usual when the world was changing more and more every day.

“We were just like, ‘Look, we need to adapt to the situation.’ We can’t just continue with what we were doing because it won’t work, and it won’t hit the same,” Fraser says. Stand Atlantic’s debut record, 2018’s Skinny Dipping, was created and released under less restraining circumstances than the band’s upcoming project, and their new album release plan is reflective of that. Instead of a traditional album rollout, the band are opting for releasing one song from the album every month until things are normal again, or as close to normal as they’ll get.

“We had an album ready to go, and we just thought, ‘What’s another way that we can hold people over until this ends finally?’ I mean the pandemic, not the world,” Fraser says, hoping that this one-by-one monthly drip of singles doesn’t last too long. The individual releases are meant to hold fans over and provide some sense of consistency, a rarity at a time like this, for the moment. “People now have the time to listen to music instead of maybe just on their commute to work or school, and then they can’t do anything for the rest of the day until they get back home,” she adds. “Now, you have a whole day, 17 hours if you want to.”

Apart from sharing song-inspired artwork and hand sanitizer memes on Twitter, Stand Atlantic fans have been reminiscing about the good old days when concerts were a thing you went to and didn’t just watch through an Instagram livestream from your couch. Coming from a music community that’s so deeply rooted in touring, the band are itching to get back on the road to share the energy of their music and connect with fans. While their current touring plans with Trash Boat, Super Whatevr and Jetty Bones are still in place for June, there’s a looming chance that they’ll be put on hold. “I’m just so excited to be able to leave the house freely and go tour the world again because I miss it so much,” Fraser says. “I think everyone does.”

USA TICKETS ARE ON SALE!!! OK GO LOVE U!

“I think every band are definitely going through the emotions and the financial strain from not being able to be on the road,” Panichi adds, urging music fans to support their favorite artists however they can at the moment. Times are hard for both musicians and their fans, but Fraser hopes the silver lining of this unprecedented time can be a new outlook on outdated industry guidelines. “This made people think outside of the box and think of different ways that you can talk to your fans or engage them and even make music and collaborations,” she stresses.

“Maybe the industry will change when things get moving again,” Fraser continues. “We don’t know. It’s been a positive twist to this whole thing, even though it’s a sad and uncertain time. There’s always a silver lining to everything.”

Check out Stand Atlantic’s latest “Drink To Drown” here. Currently, the band’s tour kicks off in Toronto June 19, and you can grab tickets and see a full list of dates here.