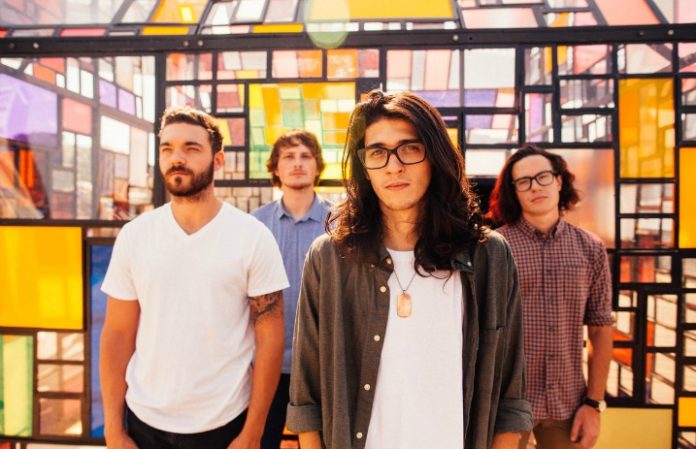 A Will Away are proof that every so often the music industry pays out to those who deserve it. They grew up in the town of Naugatuck, Connecticut, and despite their humble beginnings, they’ve managed to secure a record deal with Triple Crown Records, and since then, their incremental successes have become much more tangible. We spoke to frontman Matt Carlson about he handles a fruitful rock ’n’ roll band in 2016.

It’s been just over a year after you released your EP, Bliss, but A Will Away have done so much in that time. What have you learned about the music industry?
It does feel like it’s been much longer than a year since we released Bliss. The past year has been exciting, elating, confusing and exhausting all at the same time. But we wouldn’t trade it for the world. We’ve learned that the industry is filled with a lot of extremely passionate people who put their all into their artists. There’s truly no shortage of bands in the world, and they’ve all got passionate teams behind them pushing behind the scenes to make new opportunities happen. It’s been a bit of a change of pace for us. The work now is harder but more rewarding than ever. Standing out in this market requires everything you have and then some.

What has your experience been like working with Gary Cioffi (Transit, Grayscale) at Maximum Sound?
We returned to Gary’s studio to record our new LP because of the experience that we had working with him on Bliss. For the EP, we had very little time in the studio, but we struck a workflow with Gary that gave us a record we’re extremely proud of. In the short time that we had together, we’d collectively managed to put together a very cohesive EP that eventually led to our signing to Triple Crown Records. With that in mind, we decided to head back to Maximum Sound for the new LP. The experience this time was different: . We were in the studio for much longer and worked much harder, but again this time the energy at Maximum Sound has given us another record that we’re extremely proud of and cannot wait to share.

Everyone in our band has a life-long romance with rock ’n’ roll music spanning across dozens of genres and subgenres.

How would you describe your sound? And how did you find it?
It’s rock music. We found it by being alive. Truly though, everyone in our band has a life-long romance with rock ’n’ roll music spanning across dozens of genres and subgenres. We’re extremely passionate about this kind of music, and we don’t make attempts to place our sound in any boxes. Listening to our records, you’ll hear influences of blues rock, southern rock, metal, emo, grunge, punk, classic rock, ’80s new wave, ’90s alternative rock, pop rock, indie rock, modern rock and more. There’s literally decades of rock music to draw from and something to learn from every single one. The ability to write a good song is relative to the listener. Playing diverse rock music seems to give us an appeal to a huge variety of listeners. If you like rock music, you may find something you like in our sound.

Have any good tour stories off the top of your head?
Johnny (McSweeney, bassist) has a tendency to sleepwalk, which can create some pretty funny situations on tour, especially when we’re sleeping in the van. One night this past October, we were sleeping in the van at a WalMart in Michigan. Johnny managed to sleepwalk himself into the back room of the WalMart and fell asleep again upside-down in a pile of cardboard boxes. Needless to say it took us a while to find him… and when we did, we left the Wal-Mart.

What was the local music scene like growing up in Naugatuck, Connecticut?
Growing up, the music scene was actually pretty vibrant. There were a lot of DIY bands doing their best to make it happen and build a scene here. There were even a lot of killer jazz and rock bands that would play in the bars/restaurants here when we were younger. By the time our band was ready to play, the scene here had mostly fallen apart.

I was always fascinated by how my parents’ favorite songwriters told stories with their songs. I could tell even at a young age that those lyrics meant something to my parents beyond just what the words were saying. I’ve spent the rest of my life since then trying to write words and sounds that mean something even half as profound to other people.

Who was the first artist that really made you fall in love with music?
I can’t speak for the rest of the band, but for me it was probably either Elton John or the Eagles. My parents were always big on feeding music to my five siblings and me when we were younger. I was always fascinated by how my parents’ favorite songwriters told stories with their songs. I could tell even at a young age that those lyrics meant something to my parents beyond just what the words were saying. I’ve spent the rest of my life since then trying to write words and sounds that mean something even half as profound to other people.

So much of the music available today focuses on an extremely unrealistic and idealistic portrait of the human experience.

What sort of reaction do you hope your music will create?
Hopefully, our music should evoke different kinds of reactions if we wrote it right. So much of the music available today focuses on an extremely unrealistic and idealistic portrait of the human experience. A lot of what’s available to listen to on mainstream channels is more akin to video game or movie soundtracks than it is to the music we remember as kids. The truth is there are a million different ways to portray the human experience. As touring musicians, we get to absorb a lot of what’s out there for the diverse population living in the world. Everyone on Earth is working hard for a roof and some food. Everyone on Earth is fighting to preserve the things and people they care about. Everyone on Earth is looking for a greater purpose than they have. We want our music to discuss the not-so-shallow end of the human experience and we’d like the reaction to follow suit. On top of all of that, we’d like our music to be entertaining and for it to warrant enough listens for our message to seep through.

What do you think of this year’s Warped Tour lineup?
It seems like what we expect from every year’s Warped lineup: It’s gonna be big, it’s gonna be loud and it’s gonna rock the socks off of whoever goes out. When we were younger, Warped Tour coming through our area was one of our favorite times of the year. It gives so many music listeners—new and old alike— the chance to sample the massive variety of rock music out there. We have some friends on this year’s lineup that we couldn’t be more excited for. alt