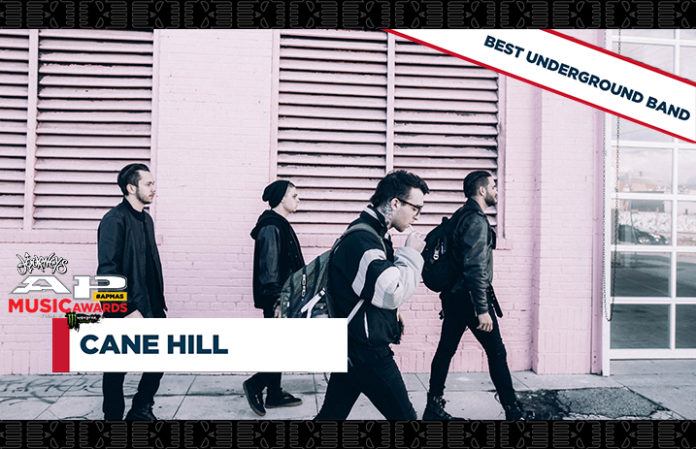 Whoever said nü metal’s dead was wrong. Since forming in 2013, the New Orleans-based Cane Hill have been reviving classic late ’90s/early 2000s nü sounds with their own contemporary ‘-core based flair. Sharing a name with an abandoned insane asylum in the United Kingdom, it’s no wonder the sounds of Cane Hill get a little eerie, hectic and off the charts.

Don’t forget to cast your vote for your favorite artists nominated for this year’s APMAs.

“Sunday School” was the scene’s introduction to Cane Hill back in 2014. When this single dropped it became clear that Cane Hill's striking fusion of nü-metalcore was sure to be successful, especially considering how confrontational and shamelessly bold the lyrics to this track are.

“The Fat Of The Land”

Cane Hill's technical skills really shine in “The Fat Of The Land.”  Opening with a guitar solo and delving into a story about an old car might sound like an '80s hard rock cliché, but Cane Hill spin the concept on its head when it's revealed the whole song is about picking up the devil as a hitchhiker in disguise.

Key lyric: “I know who you are/And I know where you've been/I'm the king of betrayal/And I'm here for your skin.”

Cane Hill tone it down a notch with “French 75.” Gone are the chugging riffs and guttural outbursts—instead a lulling, almost other-worldly voice carries the track with the addition of female backing vocals easily giving off the most haunted vibe on Cane Hill's debut self-titled EP.

Key lyric: “Have a seat, just you and me/Now we know we'll be each other's casualty.”

Vocalist Elijah Witt goes hard on this track, both stylistically and content-wise.  Former Issues’ DJ Ty “Scout” Acord helps create the distorted sounds and digital back tracks heard in one of the most aggressive tracks in Cane Hill's discography.

Key lyric: “Woke up today with the sun on my face/I tried to pray, but I hated the taste.”

Cane Hill released “(The New) Jesus” as their first single off their debut full-length Smile. Dark and whimsical, the song sounds more at home on a forgotten Tim Burton adaptation of It than on a metal album. In a good way, we promise.

Key lyric: “You put your faith in hate you can't ignore/No saving grace, not anymore.”