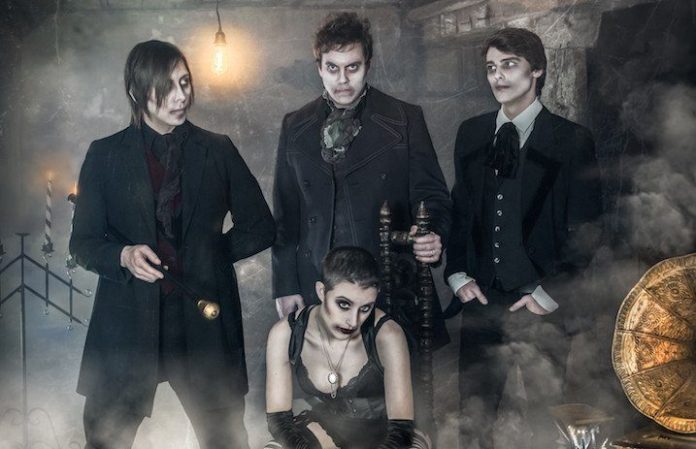 By: Marquis of Vaudeville

Steampunk, or any “punk” culture for that matter, means liberty — freedom for any individual — of expression, of invention, to be whatever or whomever they wish to be. It is independence and liberation from society’s dependency upon big business, on corrupt corporations and politicians. It is nonconformity and individuality. At its core lies imagination, the key element of any dreamer — which is the driving force behind what Marquis Of Vaudeville does as a band. We began writing our music with the inkling that imagination and fantastical escape for the listener would be the overall inspiration behind its composition, and we continue to strive for that imaginative essence in all that we do.

“It is nonconformity and individuality.”

Read more: In defense of the fangirl—an op-ed

For those out there who might not be as familiar with the term, at its base level “steampunk” is retro-futuristic Victorian science fiction, pioneered by classic literary authors Jules Verne and H.G. Wells. Yet over the years, it has caught on in popular culture with films such as The League of Extraordinary Gentlemen, Sherlock Holmes, Hugo, The City of Lost Children, or video games like Dishonored, Thief and Bioshock Infinite.

“Steampunk has always been about storytelling in some form, whether it be in writing, with a costume, a character/persona or a steampunk device one has created.”

Dawning as a do-it-yourself movement, or a Victorian renaissance for the modern age, it was the gritty independent spirit of steampunk that drew us to the scene. Steampunk, and all that it encompasses, seems to scream “damn the man!” and “down with the establishment!” We love that. In turn, the theatrical flair and intriguing nature of our outside-the-box songwriting grasped the attention of the alternative sub-culture scenes, including steampunk, goth and even dieselpunk. We kind of found each other being that our alt-rock, carnival-esque, punk-cabaret stylings — fusing timeworn elements of the old world with newfangled innovation — epitomized the essence of steampunk.

In the beginning, most of our attire was made by cosplayers and fans of the band. Many steampunks make a great majority of their clothing themselves by learning about sewing, leatherworking, costume making and creating new items out of dismantling others; but we also found a great deal of our clothing and cohesive accoutrements at thrift stores, pop-culture conventions, mom-and-pop costume shops and online stores.

We’ve watched the scene evolve over the past eight years of being a band, and we’ve been major contributors to the flourishing scene and to the community, especially in the southern region of the country where we’re from. As we began to perform at more festivals and pop culture fandom, goth/horror and steampunk conventions, like Dragon*con, Wizard World Comic Con, Endless Night Vampire Ball and the Anne Rice vampire ball, “Gathering of the Ancients,” we began to see how prevalent steampunk was becoming, and how it had permeated popular culture and subcultures. Steampunk has always been about storytelling in some form, whether it be in writing, with a costume, a character/persona or a steampunk device one has created. We also like to tell stories, and music affords us a way to tell them. We want to give people something to daydream about, give them hope, open their eyes, hearts and minds, and we’ve found that messages can be more profound and persuasive when woven secretly within the melodies of music. That’s why our songs are quite often wrapped up within, and somewhat veiled behind, an imagined story dealing with some sort of fantastical idea such as discovering other worlds and alternate universes, star-crossed vampire lovers, vengeful stage magicians, mysterious whimsical circuses, plundering gentleman highwaymen or intriguing labyrinthine understreets.

“Anything is possible, and anyone can be someone, in the multiverse of steampunk.”

Wherever we went, we met sky-ship pirates, mad scientist toymakers, automaton musical artists, adventurers, treasure hunters, aristocratic authoritarians and thrill-seeking outlaws – all with a story to tell and each hope-filled and in search of one thing – escaping from reality: The very thing that we wish to create with our music. Sharing that connection, a great majority of steampunks, who were originally fans, quickly became friends; and now, to us, many in the steampunk community have become like family. That’s quite what the steampunk community has become: a large inclusive family in which all are welcome. This bond, and this family, mean a great deal to us. We’ve seen timid introverts find their voice through steampunk. We’ve seen the lonely surrounded by hundreds of newfound friends. We’ve seen lost souls discover a place where they belong. Some simply find a hobby in the scene – some courage, others a purpose. They find their home, as we did. The real world has become a harsh, hateful, unwelcoming place for many, but for those who are open, accepting, understanding and imaginative – those dreamers who want something more than the mere mundane – they can find a new world waiting for them, one that accepts them for who they are or for who they wish to be. Anything is possible, and anyone can be someone, in the multiverse of steampunk.

Marquis of Vaudeville's new record, The Tragic Valentine, is out today via Knotwright Lane Records. You can order the album here.