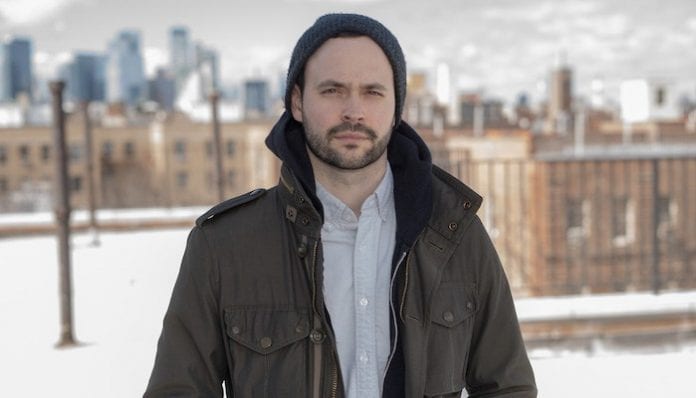 A true musician is never finished, no matter how much they’d like to be. This truth was a hard-learned one for Garrett Zablocki, a founding member of Senses Fail who quit the band in 2011. Now, after eight years of silence, he’s back under Stereo Stargazer with his first solo EP, Lay Me To Rest If I Say, “I’m Done.”

“We grew up in [Senses Fail],” Zablocki says of his beginnings. “We got signed out of high school. As far as I remember, it was just an upward trajectory. It seemed like every show we played just got bigger and bigger; it was the right sound at the right time. When I decided to quit, I hit a point where I was so burnt out. I was looking to the future. [I thought], ‘Do I want to be 40 years old and playing bars?’ I really wanted to do my own thing, and in doing so, I sort of just swore off music entirely.”

Upon departing from Senses Fail, Zablocki enrolled in college full time—a “normal” milestone he missed while trotting the globe. In an effort to further distance himself from his musical past, he chose a career that contrasted his roots: finance. And that made him happy—for a little while.

But he was ignoring a crucial part of his identity, and deep down he knew it.

“I was having this fight with myself,” he admits. “‘No, you can’t let this stuff come back into your life because then all the stuff you hated is going to come flooding back.’ But as time progressed, bits and pieces of it started seeping in.”

Having been the main songwriter for Senses Fail, music wasn’t something he could just permanently banish from his life. The need to create was too strong to quietly fade away. Little by little, he started revisiting old riffs and song ideas that he had set aside years past.

“I had a pile of ideas and half-written songs that I didn’t show the band because I didn’t think it was right for whatever we were writing at the time,” Zablocki explains. “I kept it off to the side on a hard drive. So when I quit and put myself through school, I put my headphones on and played along to just get it out of my system. Then I started renting a practice space in the Lower East Side [of Manhattan] every Saturday. During the week I would put the music together. Then, I’d go down to the practice space and work on vocals in the exact same way I would do Senses Fail songs.”

Even so, he never thought that he’d put out a proper release again. And if he ever did, he wanted it to sound like the furthest thing possible from Senses Fail.

“For years, I tried to fight that [type of songwriting],” he shares. “I thought, ‘If I’m going to ever do this again, it has to be something totally different.’ But that’s just all I know how to write. As soon as I stopped trying to do something different, it all came flowing out of me real fast. [With this EP] I’m just being true to myself.”

That being said, any Senses Fail fan who listens to Lay Me To Rest If I Say, “I’m Done” will immediately be able to recognize similarities between the two projects. The intro to “Empty Grave” and the lead guitar of “Build Something New,” for example, could easily have been on an SF record.

But Zablocki isn’t just repeating himself with this EP as there’s more of a pop-punk sensibility to the new songs. There’s also a distinct difference in his vocal stylings compared to those of Buddy Nielsen. With the help of Nada Recording producer John Naclerio—who also worked on Senses Fail’s debut EP, From The Depths Of Dreams—as well as mixer Sam Guaiana and recording drummer Justin Meyer, Zablocki is now able to reintroduce himself to the world.

“Lyrically,” he says, “[the EP] is really about growing up and realizing that there is no such thing as growing up. You’re never going to know where you’ll end up. You could do a really good job of planning, but when you get there, it shouldn’t be the end of the journey. That’s what these songs are all about.”

The six-song release sees Zablocki working through his past and reconciling his identity. He may have been in Senses Fail for years and gotten a job in New York City’s financial sector. But no matter what, he is and will always be a musician in his own right. There’s no ignoring that anymore.