Back in November, Steve Aoki dropped his latest full-length, Neon Future III, which features a plethora of high-profile collabs. blink-182 were among those who appeared, marking their first new track since the release of California’s deluxe edition in 2017.

The two-time Grammy-nominated DJ and producer teamed up with the pop-punk mainstays for “Why Are We So Broken,” and they’re premiering the track’s video exclusively with AP.

Aoki and blink have been tight for years, in turn making this collab a natural matchup.

“I’m lucky to say that the boys from blink-182 have been very close friends of mine for a while now,” Aoki says. “I am always so happy when we get to collaborate, and this music video was nothing but fun to shoot. Their positivity and energy is contagious, and they are one of the best live bands in the world.”

While the track is Aoki through and through, you can still hear plenty of blink’s influence.

“I’ve been friends with Steve for over 15 years, [so] doing a song with Steve and my band just came so easy,” Travis Barker explains. “I think this song is a good balance between Steve Aoki and blink-182.”

The musicians teamed up with director Brandon Dermer who has worked with Panic! At The Disco (“Hey Look Ma, I Made It,” “Victorious”), Every Time I Die (“It Remembers”) and FEVER 333 (“Made An America Remix” featuring Barker and Vic Mensa) as well as on VICELAND’s What Would Diplo Do?

Dermer took his personal experiences and applied it to the video’s concept which shows both acts putting their all into a live performance while a couple break various objects outside.

“When I first heard the song, I started reflecting on my own experiences of times I felt broken or was in a broken situation,” he explains. “The concept is an abstract visualization of working through a problem or issue with a loved one. Also, I love breaking stuff.”

Neon Future III is Aoki’s most pop-driven album to date, and it conveys his fascination with futurism. In addition to blink, the album also includes collaborations with Jimmy Eat World’s Jim Adkins, AJR, Mike Posner, Lauren Jauregui and even Bill Nye The Science Guy, among others.

In addition to the album, Aoki partnered with Impact Theory Comics and writer Jim Krueger to create a comic book based on the futuristic concept. The first issue drops March 27 and is available for preorder now.

Aoki will also be teaming up with FUL, a travel bag and gear brand, for his own collection, which is slated to drop in August. The musician is also working on a memoir, BLUE: The Color Of Noise, which will be released Sept. 3. Preorders for the latter are available now.

Check out the “Why Are We So Broken” video below.

“Why Are We So Broken” appears on Neon Future III, which is out via Ultra Music/Dim Mak now. You can pick up the album here and check out the full tracklisting below. 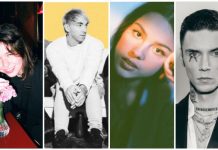