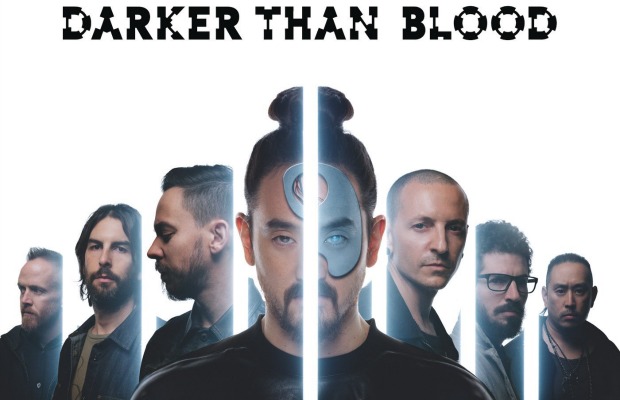 LINKIN PARK developed a new standard for 21st century rock through their fusion of hip-hop flow with severe guitar riffage, while EDM auteur STEVE AOKI pushed the boundaries of club culture, engaging listeners’ minds as well as their bodies. What began as Twitter exchanges between Aoki and Linkin Park’s Mike Shinoda in 2012 evolved into a collaboration between the two heavyweights of their respective genres. “Darker Than Blood,” the follow-up to 2013’s “A Light That Never Comes,” appears on Aoki’s upcoming full-length, Neon Future II. Aoki and Shinoda took a break from a video shoot to speak with Norman Narvaja about the making of the track.

What were the initial goals you set when you began this collaboration?
MIKE SHINODA: We started this song and “A Light That Never Comes” at the same time. With the vocals, Chester [Bennington] and I loved the melodies but the words weren’t there. We weren’t vibing with what we were saying but everything else was there. I felt we could do much better on the lyrics. One day we came back to it and took a really dark approach to the words, which gave it more traction and more color. I feel the track itself is more upbeat than the lyrics, which makes for a cool juxtaposition.

STEVE AOKI: My number one goal was to learn new hair care tips. [Laughs.] I’m always looking to learn something new. We both had some time on our hands when we started writing both songs. These were tunes we both thought we could make into real songs. It’s been a long process—over two years. It was a process that wasn’t about how fast you could get things out; it was a process that takes time to make sure these things can fit for both our worlds.

So this was about making sure the craftsmanship was front and center, not releasing something until you get things right.
AOKI: Exactly.

SHINODA: There is also something to be said about waiting for the inspiration and the right time an idea comes across. We weren’t in a studio together for 24 months, so there was a lot of time to come back to it, write an idea down, and if you couldn’t move the song forward, you had a bunch of time. [Linkin Park] do this often in our process where we’ll try something, but we don’t get frustrated when an idea doesn’t work. We move on, come back to it with some fresh stuff, and eventually you hit something that makes the song jump forward. Some songs come together in a couple of days, others take a longer time to get where it needs to be.

AOKI: We let the song sit, so when we’d come back to it, we’d know if it was going to stay at that stage or have to evolve. We all wanted to make sure it was at a stage we wanted it to be before we “unleashed” it. I feel like a lot of younger artists aren’t comfortable doing this; a lot of younger guys just want to get things done right away. We took things in a more organic way. If you believe in the song, it’s going to be a timeless piece.

What skills and philosophies did you see in each other that made you want to pursue working together?
AOKI: I grew up listening to Linkin Park. So for me, it was about working with one of the bands that inspired me for more than a decade. I was in bands before I was a DJ, so I always had an interest in the harder music. I ended up talking to Mike on Twitter in 2012. We started talking and it was a perfect time for us, as Mike was already in the studio working on their Living Things album. In 2012, it was almost unheard of for an electronic producer to work with a rock band. For me, it was a chance to “carve a new lane.”

SHINODA: From our end, we’ve always been excited about trying new things. It was a chance for us to see how Steve approaches making a track. In a lot of weird ways, you find a lot of stuff that informs or expands your understanding of how to do things— something as simple as the way Steve approaches the storytelling of a song from beginning to end and how it holds your attention. This is coming from his world and not the rock or pop song-structured world. On “A Light That Never Comes,” we contributed more to the music on that one. That one was sonically a little bit more like Linkin Park. With this song, Steve did a lot of the heavy lifting.

Do you intend to take “Darker Than Blood” to a live setting? Steve, how would you approach this as a DJ in a live event? Mike, how would you retool the song as part of Linkin Park’s live performance?
SHINODA: We’ve done a few performances together, I know Steve has included “Darker Than Blood” in his live performances. Steve can make a remix of the song on the spot, and turn it into any stylistic sound he wants to. On our end, our stage is very tech-based, a lot of keyboards and samples. All of the gear is there for us to transition from a super-heavy metal song to something all electronic, and that’s something we’ve built since day one. Thankfully, we’ve sold enough records we can afford the gear. The technology has gotten a lot better and we can do things now that we couldn’t do two years ago.

The intersection of EDM and rock music in the broader sense is becoming more acceptable. Where do you see this combination going in the future?
SHINODA: Let me add to what you just said. For me, being in a rock band, being on the outside a little bit, if you understand guitars and drums and live instruments, you have a certain familiarity and perspective. One thing I run into from folks in that community is that they don’t understand what it takes for Steve to make a track like this song. EDM wouldn’t be where it is today without guys like Steve being at the forefront, defining that culture in so many ways. There are only a handful of guys you can say that about. For us, it was very exciting to learn about how he approaches things. A lot of respect goes to Steve.

AOKI: I feel like we’re still at an experimental stage—this doesn’t happen often. You hear a lot of electronic music in pop, that’s been happening for the last six years. Hip-hop has been crossing over more and more. Rock hasn’t really been explored. We’ve seen DJs and producers working with singers, but with a full band and instruments, it gets a lot more complicated to mix down when you’re used to working with a very similar kick or a similar snare (sound). With instruments, it takes a lot more time to get them to click, and to balance and master that. A lot of producers say, “Nah, just go with the vocals.” If you take that risk and find that natural balance, you move forward and keep your standing in the [EDM] community. A beautiful thing is that this cohesion is happening more and more, where as maybe 10 years ago, this kind of collaboration would be shunned.

“Darker Than Blood” is a lead-in to Neon Future II. What can listeners expect from the upcoming release?
AOKI: This is the second chapter of Neon Future. It made sense for this song to be part of the album, as it is a lot more emotional, [there’s] more of an introspective feel to it. Neon Future, I would say, was an introduction to a future world, a big kind of party record with hip-hop vocals like Waka Flocka and MGK. There isn’t a lot of that going on with Neon Future II. They are two different themes. With Neon Future I, I was introducing ideas of the [technological] singularity with [futurist author] Ray Kurzweil; and of living indefinitely forever with [gerontologist and author] Aubrey de Grey, two scientists in their respective fields talking about that on the album. With Neon Future II, we have J.J. Abrams, director of Star Wars: Episode VII and, to me, the voice of science fiction for our generation. There’s Kip Thorne, executive producer of Interstellar, and more importantly, a big scientist in the field of astrophysics [who has] worked alongside Stephen Hawking. Neon Future II is about space exploration and has songs that relate to that world.

Finally, what idea or response would you like listeners to walk away with after hearing the work?
SHINODA: I feel like with this track, this is something that started off a little bit more upbeat or whatever. But when Chester and I were in the studio, there was a bit of a feeling like fear or something. We were talking a lot about uncertainty of where the world is going or uncertainty of the way people treat each other. The song is a dark song. I hope some of that fear and darkness inspires people to actually stray away from that path. Fear is not a bad emotion: Some people try and stifle that. There’s nothing wrong with that; it’s supposed to keep you out of trouble. When I was 13 years old, I was all about listening to the heaviest rock or hip-hop records I could find. Whether it was Metallica and Nine Inch Nails, or Public Enemy and NWA. That was my shit. If I listen to a lot of music now, a lot of what people in the music and entertainment industry talk about, it’s very poppy and happy. If I was 13 now and hearing this, I’d be asking, “Where’s the substance?”

AOKI: It’s about constructing and dealing with issues that are happening now. It’s not a fluffy song, at all. We didn’t get together to write a fluffy record. We wanted to produce something that exemplifies what’s going on, and dealing with things, straight up.

SHINODA: With that said, when you listen to one of Steve’s records, there’s a lot of dimension to it. Going back to the Public Enemy, if you only had Chuck D talking politics, that would be a real downer. There’s got to be a Flavor Flav. alt