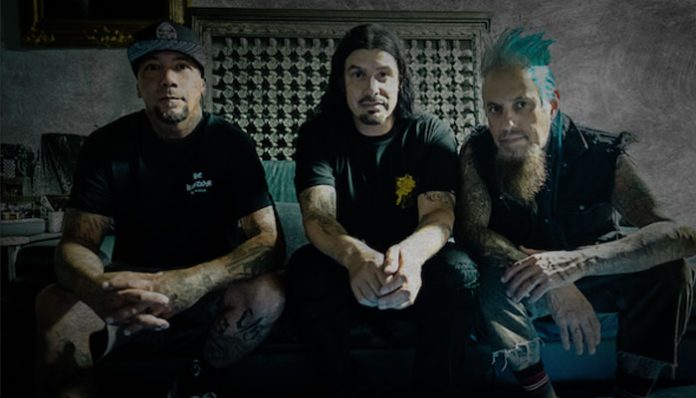 After two albums exploring their roots, Fieldy from Korn’s side project Stillwell have finally found their comfort zone. Throughout their 14 years together, the band formed by a trio of creative minds, including P.O.D. drummer Wuv and rapper Q-Unique, have tried out their nü-metal chops, investigated their flair for rap and never quite settled for either. That is until this year’s effort, Supernatural Miracle, came along, where the band uncovered their shared love for alternative rock and put their consummate talents to the test.

Replacing Fieldy’s signature slap bass with a slick groove, this year’s record ventures through rock’s various styles, from heartfelt ballads to contagious anthems. Tackling both extremes at the same time is “Could’ve Sworn,” Stillwell’s newest endeavor to receive a trippy music video treatment, premiering right here at Alternative Press. Fieldy tells us about the band’s transformation and how this new track—armed with a relatable sentiment about loss—has settled right at home in 2020.

Read more: We finally know what to expect from MGK and Mod Sun’s ‘TTMD’ movie

It’s been five long years since Stillwell’s last record, Raise It Up. How much has changed for this year’s Supernatural Miracle?

FIELDY: We were on a journey of trying to figure out what we really wanted to do, to find ourselves. We didn’t want to sound anything like Korn because I didn’t want to take the integrity away from my band. We wanted to put something out that was totally different because we all listen to very different music. You’d be surprised. We went in the direction of the bands that we listened to and influenced us, from Stone Temple Pilots to Jane’s Addiction, Foo Fighters to Oasis. Once we found what we were really looking for, it gave us a path to a more consistent album than Raise It Up. We found the missing link was the bounce and the swing of a fun song.

Despite being an upbeat track, there’s a deeper and more personal meaning behind “Could’ve Sworn.” What was the inspiration behind it?

Q lost his brother some time ago, and it’s about that feeling when you could’ve sworn you’ve seen your lost loved one here or there. It’s more of a celebration of his life than a sad one. It’s not a sad song because it’s a feeling millions of people can relate to. Sometimes you look through a crowd and think, “Did I see them?” Even if it’s not just talking about loved ones that have died, right now it’s also about our rock scene at the moment. Because that’s our family, and we don’t get to see them anymore.

How was the video for “Could’ve Sworn” filmed?

I bought a full-on green screen for this huge living room in my house that I never use. It has like 35-foot ceilings, and it’s a massive room that I thought we could shoot videos in. So we’ve got the whole setup here. We’ve been getting into being more consistent and pushing ourselves even more because we’ve been able to. Now we’re really deciding to commit because we’ve found our direction on this new album, and we really love it, so that drives us to go entirely into this. We’ve been able to be creative and take our time. We’ve been editing it ourselves, and that’s been so fun. When a band’s in a room editing, there’s never been any better music video. You’re right there with it. You know when the changes should be with the beat or the snare. It’s been a lot of work, but there’s nothing else to do.

How would you like people to feel when they hear “Could’ve Sworn” for the first time?

I’d like people to feel that it’s possible to write a song about a loss or sadness, but you can still write songs that lift people up. It’s definitely a song that you can put on, and it gets you moving and makes your day. You can still get things off your chest, but it doesn’t necessarily have to be sad. A lot of our topics have been about getting people rocking and having a good time. Because everybody’s already bummed out enough right now.

Check out Stillwell’s “Could’ve Sworn” below.