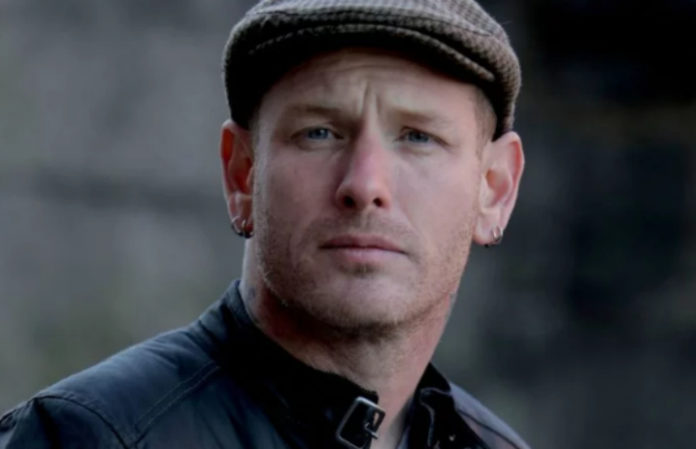 With five studio albums under their belt, the members of Stone Sour are excited to take the world by storm with their upcoming release Hydrograd, which will be released on June 30 via Roadrunner Records. The full-length album was recorded at Sphere Studios in Los Angeles, and frontman Corey Taylor confidently claims that it’s “probably one of the best records we have done since the first Slipknot album.” AP got a chance to sit with Taylor and discuss the album songwriting and recording processes, specific lyrics and the meaning behind them, and his rather strong opinions regarding the modern fear of inconsistent music genre fluidity.

You’ve been vocal about how you feel these songs rank right up there with some of your most celebrated works, like the first Slipknot record. What makes this album feel special to you?
I think it’s just the energy. I tend to turn my back on songs that have been recorded in a certain way. I can immediately tell if something was thrown up on a bulletin board to be put together, whereas when a band has done something where it feels like you can hear the room around them—you can hear the molecules in the air traveling from the mic to the speaker—that’s what I’m talking about. And I feel like that’s where our album’s at.

“It’s not too late to bite the hand of fate.” That’s a line you deliver pretty early on the record. It’s a pretty telling lyric about taking control of the things you can and not worrying about the things you can’t. It seems like you’re in a positive headspace here.
That was the balance I wanted to strike. I wanted the album to have that natural, passionate positivity where it’s not sugary-sweet, but it’s not super-down in the dumps. Like the vibe you get from a Van Halen record or an AC/DC album: You don’t listen to it because you want to stick your head in the oven. You listen to it because you want to have a good time. I always tried to reach for that moment, and I felt like I had never truly gotten there. But with this album, man, we nailed it.

That comes across pretty palpably. “You can only scream your heart out for so long.” That’s another lyric that comes early on in the record that seems to spell out your intents here. For a large part of your career, it seems like your music has been an outlet for your anger and frustration. That’s still part of this record, but at the same time, it also feels like you’re channeling a different side of yourself.
Absolutely. For me, it’s always been about finding the next step in the evolution—with both bands, whether it’s Slipknot or Stone Sour—I’m constantly looking for that ground I haven’t walked on. It maybe feels familiar, but to me, it has to feel new, or I feel like I’m backtracking. I feel like going over the same trails that got me to where I was in the first place. I’m always looking for that new territory, that new experience, that new way of trying to get across what I’m talking about, trying to get away from the desperation of certain moments in my life that have left me a little more angsty, a little more dogmatic when it comes to what people expect from me. This album is just such a breath of fresh air for everybody. Everybody who’s listened to it has just been like, “This punches, but it’s not an anvil.” It’s like a wooden Louisville Slugger.

The album has some of the most direct material, but also some of the most diffused. You’ve never done anything like “St. Marie” before, and “Song #3” is one of your poppiest.
It’s just trying to go into areas that just don’t feel familiar, but approaching them from the sense that we’ve always wanted to. This is where we’ve always wanted to go, this is the place that we always felt like we were heading. We’ve just now started to get there. Sometimes, it just takes a little reassurance from the audience, too. We had so much success with the House Of Gold And Bones albums. If we hadn’t done those, I don’t think that we would have been able to really throw the shackles off on this album. We took so many risks on those albums that it really encouraged us to just go for it on this one.

In “Fabuless,” you make lyrical allusions to Led Zeppelin and the Rolling Stones, which is fitting, because at the end of the day, this is just a big, badass hard rock record. Not a lot of your contemporaries are doing that these days.
It’s because people are growing up very specifically categorized— there’s a very specific sound for active rock, there’s a very specific sound for alternative, there’s a very specific for this and that and the other one— and everyone is terrified to step outside of that box because there’s no proven way to make money when you step outside of that box. We’ve never given a shit. We’re either thin or flush. That’s just the way we like to run. To a lot of bands, “rock” is a dirty word. They won’t even call themselves a rock band anymore; they’ll call themselves alternative bands all day, and it’s like, “No, fuck that. Are you kidding?” I had a band, who I won’t mention by name, tell me to my face, “We’re not rock anymore, we’re alternative.” And I was like, “That’s the dumbest thing I’ve ever heard.” I said, “Why? What are you scared of?” And they wouldn’t answer the correct way, so I just walked away from the conversation. I just think people are too worried about keeping up appearances, about some sort of backlash. I tell you what, give him shit for the way he said it, but look at Chester [Bennington]. At least Chester’s standing up for his new shit instead of hiding behind a wall of rhetoric because they’re afraid of not making money. Linkin Park is at least trying to do something different. You may not like it, but who gives a shit? There are people out there who will like it, and they’ve at least got the balls to do it. I understand why the reaction to what he said was what it was, but he’s got a point, man. Fuck you if you don’t like the new shit. People are so afraid of risk, that the only way you really win is if you risk, and that’s all we’ve done our whole career.

Obviously you don’t sit down prior to working on an album and say, “Okay, we want to make this kind of record specifically,” because if you did so, it would be forced and maybe a little stilted. That being said, did you at least have an idea of the vibe you were going for this time around?
It was a slow process of coming to the realization of how we wanted to put it together. We had the songs—and we knew we had the songs—and it was over time that we figured out how we wanted to record it. We had several different ideas on how we wanted to do it. We had so much fun recording the Burbank albums live in Roy [Mayorga’s] garage that we were like, “Let’s try and do the demos that way.” We recorded them live, and it sounded amazing. That really led us to the decision to do it live in the studio as well and really try to capture that energy. That decision didn’t come until later. It was a slow building process of all of these ideas really coming in. You can have a vague idea, but you shouldn’t go in rigid, you should always go in fluid, because that’s the way you’re going to capture the best things, the best ideas for these songs.

This is your first record without guitarist Jim Root. How did that impact the way these songs came together?
We’ve always written as a collective. So, it was just kind of adapting to the way that Chow [bassist Johny Chow] and Tucc [guitarist Christian Martucci] write. They brought in so much cool shit, we didn’t even have a chance to think about the difference, really. The stuff was just so good, and it fit in so well with what we were writing that all of a sudden it was like, “Okay, we’re off and running.” There was no adjusting. We were off to the races, man.

You gave yourself a pretty sweet new title on “Somebody Stole My Eyes”: “The rock ’n’ roll Han Solo.” You gotta get that on a business card.
Oh, I’m about to. I’m going to have to call [George] Lucas’ people and make sure it’s okay. I’d hate to get sued by Skywalker Ranch or something. That song, it has such a boisterous, edgy energy to it. I really had fun writing the lyrics to that song. “Putting on blue suede shoes and dancing on your grave”: That’s probably one of the top 10 coolest things I’ve ever written.

Excited for Hydrograd's release tomorrow? Let us know in the comments below.