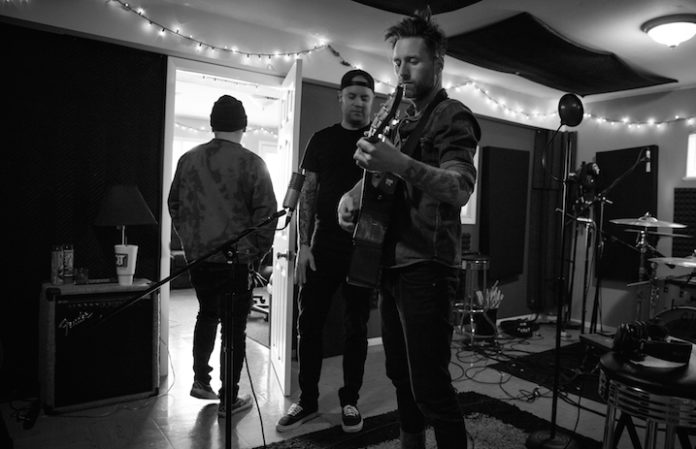 Story Of The Year are back with a bang. Seven years after the release of their last album, The Constant, the Missouri post-hardcore four-piece return with a new single, “Bang Bang,” off their upcoming fifth full-length album, Wolves, out Dec. 8.

“It’s pretty crazy that it’s been seven years since The Constant.” reflects Story Of The Year vocalist Dan Marsala. “We decided to take a break after that record because we’d been touring for eight or nine years and worked ourselves really hard. But we had no idea the break would last seven years. The time just flew by. We’d do a couple of tours and then say, ‘We’ll start writing next week…’ It’s crazy how time just gets away from you. We all started families during this time off and got preoccupied with that, so the fact that we finally got around to writing new music feels great! The new songs are very genuine, and everything that happened with Wolves happened very naturally. I think people are going to be pleased with it.”

Day two of vocals for the new @storyoftheyearband record is officially complete. I'm so fucking excited about these songs!

In addition to the growth and change that comes with starting families, another big difference with the 2017 model of Story Of The Year is that the band are now a foursome, following the departure of bassist Adam Russell. When asked about the lineup change and the vibe of the band in general, Marsala has nothing but praise for his former bandmate and the rapport he shares with guitarist Ryan Phillips, previous guitarist-turned-bassist Philip Sneed and drummer Josh Wills.

Read more: Story Of The Year part ways with bassist, post letter to fans on their future

“It’s different now because Adam is no longer playing with us,” Marsala says. “Phil’s move from guitar to bass has brought a different vibe. But Adam leaving was a totally natural process. He didn’t want to tour anymore, so there was a mutual parting of ways, and we’re still friends. Adam actually showed up at our video shoot for 'Bang Bang’ the other day and helped us film, and it’s almost like he’s still in the band – he just doesn’t do the music part anymore.

“The atmosphere is great now,” he continues. “We’ve always been really good friends, but being together that much for so many years meant we needed a break from each other. It’s cool that when we get together now, we’re like, ‘Hey man, I haven’t seen you in a while!’ It’s exciting to play music, because we’re not doing it every single day. It’s been slightly weird because it’s always been the same five guys, and now, without Adam, making this record has been a bit different, but we definitely didn’t want to bring in an outsider. It didn’t seem right.”

Wolves also finds Story Of The Year changing their business approach, as well.  Without a label following the conclusion of their deal with Epitaph, the band turned to their fans for financial support via the Pledge Music platform, and Marsala is beyond thankful for the backing the band have been shown.

“It was amazing to hit our funding target so quickly!” he says. “The decision to go with a crowdfunding campaign was something we went back and forth on a few times, because we’d been on a label throughout our entire career. But with our contract with Epitaph ending, the opportunity became available for us to do something different, so we decided to give Pledge Music a try and see how it works. We hit our goal super-quick – I think it was within three days – and that reaffirmed our belief that we need to continue playing music and that there is still a demand for us. It was awesome to have that confirmation from our fans.”

Their fans certainly turned out in droves to make sure Wolves happened; and now, with the release of the sure-fire crowd-pleaser “Bang Bang,” Story Of The Year are returning the favor. A fast-paced, electro-infused rager complete with a catchy chorus, it’s the perfect way of reminding fans why they fell in love with the band in the first place.

Listen to “Bang Bang” below:

“It was the first song I finished vocally and sent back to the band,” Marsala remembers. “Completing ‘Bang Bang’ was the moment where we realized, ‘Okay, this is what Story Of The Year sounds like now.’ That was the point at which we got excited for this new record. It’s got all the classic elements of our band: It’s fast and heavy, but melodic; and lyrically, it encompasses the message of the album at large – the idea of the wolves closing in and time running out. The lyrics on Wolves are some of the most personal I’ve ever written. It’s very vulnerable and dark, but it’s my favorite thing I’ve written in the last 10 years. Life has changed a lot recently, and the record is about growing up and how life hits you. Wolves is a metaphor for time slipping away; how it’s like a pack of wolves closing in. For the last couple of records, I dabbled in politics and socio-economic issues, but for this album, I wanted to get back to focusing on me.”

“The lyrics on Wolves are some of the most personal I’ve ever written. It’s very vulnerable and dark”

This fifth Story Of The Year album is clearly of great personal importance to Marsala. When writing Wolves, the fans were never far from his mind, and he’s got a message for those who are planning to check out the record.

“This album is very personal to me, but I wanted to write in a style that meant people could connect with it on their own level. I want people to hear the lyrics and feel it in their own way,” he says. “Hopefully, Wolves can make someone’s day a bit better, and they’ll hear the music and realize someone else feels the way they do, too. I just want people to connect to it and enjoy it. Wolves isn’t pushing an agenda on anyone. It’s very much me saying, ‘This is where I am in life, and this is what’s happening with me.’ I want people to find some connection with this record. That’s all you can hope for, really.”

Wolves drops Dec. 8, and you can pre-order it via Pledge Music now, with public pre-orders available next Friday, Nov. 3.