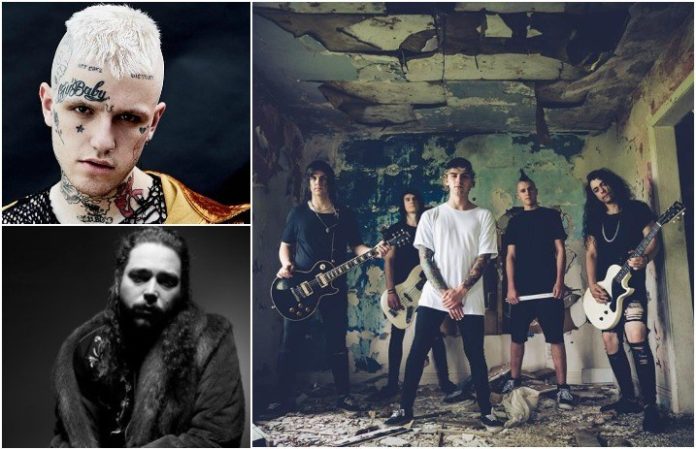 Hopeless Records newbies Story Untold are on the verge of releasing their ambitious debut album, Waves. The Montreal pop-punk quintet have put together a record full of saccharine, sun-kissed jams that will be right at home on the playlists of State Champs, As It Is and Broadside fans. But write these guys off as just another batch of Blink-182-worshippers at your peril, because when it comes to his musical influences, vocalist Janick Thibault is just as concerned with learning from rapper Post Malone as he is Mark Hoppus.

READ MORE: The 10 most influential bands of pop punk

“My goal with music is to get inspiration from as many different people and artists as I can, and Post Malone is definitely one I’ve learned from,” Thibault explains. “When we were on tour with Simple Plan back in 2016, all of the members of the band apart from me were listening to [Post Malone’s track] ‘Go Flex’ a lot. At the time, I didn’t know who he was, and I didn’t really like it—it was just too different, and unlike the usual music I listened to. But after listening to it 20 times on the road, it started to get stuck in my head, and I found inspiration in that song because it’s simple yet different, and the chord progressions are the same as what a lot of pop-punk bands use. It definitely had an impact on my writing.”

As well as looking to Post Malone, Thibault also sought inspiration from artists slightly closer to his world, but even then, the names he cites are not the ones you might expect.

“The last song on Waves, ‘Chasing Feelings,’ was heavily influenced by Lil Peep,” Thibault tells AP. “It’s the smoothest yet weirdest song on the album, and it’s a very dark track. It’s got a very catchy, ‘pop’ chorus, though! Lil Peep’s music has so much emotion, and that’s always appealed to me. I learnt from his chord progressions, too: He worked with Rob Cavallo, who has produced records by Green Day and My Chemical Romance, and those influences are reflected in the songs on [Lil Peep’s album] Come Over When You’re Sober, Pt. 1. The music and lyrics are pretty simple, but they’re catchy as hell—that’s the aspect of his output that’s influenced me most.”

For Thibault, his approach to Story Untold is to try and produce pop-punk records that are as rounded and extensively influenced as possible. So, as well as listening to lots of State Champs and Simple Plan, the likes of Bring Me The Horizon and PVRIS are in regular rotation on his playlists.

“I vibe with those bands that incorporate pop and electronica into their music,” Thibault says. “What we wanted to do with Waves was create some pop songs, but retain that element of rock at the same time, and that’s exactly what bands like Bring Me The Horizon and PVRIS do. They write good pop songs, but they’re still heavy—that’s why they’ve had such an influence on me.”

If a pop-punk band taking inspiration from an array of eclectic artists sounds like your thing, then you’re in luck, because Waves drops this Friday, Feb. 2.