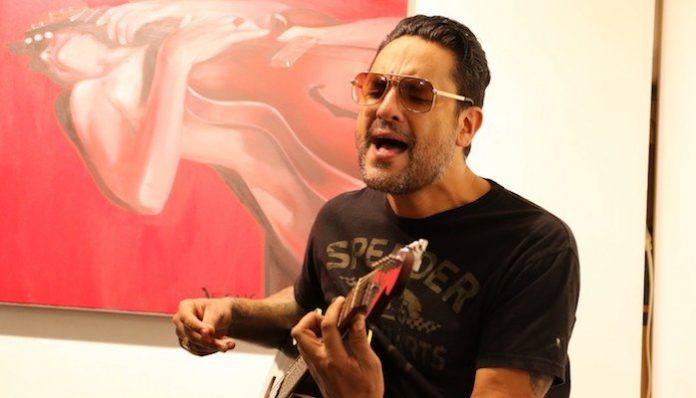 Jason Cruz, frontman for long-running punks Strung Out, will be showing a selection of his artwork at the Copro Nason Gallery in Santa Monica, California, Friday Oct. 25. The event heralds the release of There Are Such Things As In Your Dreams, a children’s book he wrote and illustrated.

Cruz, who traded an art school scholarship for life in the punk-rock trenches, is a self-taught graphic artist. He’ll be showing pieces from his book, as well as images definitely not in the realm of child’s play.

In addition to featuring Cruz’s work, the gallery will also be hosting works by legendary skater Steve Caballero. Cruz’s bandmates in Strung Out will be on hand, doing a special acoustic set that evening. For more information, visit his website here.

Cruz acknowledges that he can’t choose one creative outlet over the other. The dynamics of being a part of a long-running punk band and the personal statements he makes on canvas are different, providing outlets that are personal in separate ways.

“With the band, it’s a collaborative thing,” he explains. “You can’t get too self-indulgent because you’re collaborating with other people. That in itself creates the connection that people have with it. I think it’s important to a band to draw from each other and to make sure you’re not going too far in one direction. You need to accommodate everybody else’s needs and vision.”

“I hope I’ve earned the reputation of being honest, you know?” he says. “As an artist, you can’t just stop it. As a musician, you can’t stop when things get a little dirty. I believe you’ve gotta push through that and go as far [in] one direction as you can so you can go in the other direction as far as you can. You have to broaden that scope as much as possible in both directions. That’s who I am. I’ll push the boundaries. I try to rock on both sides of the pendulum.”

The showing is a production of Punk Rock & Paintbrushes, an event/exhibition series curated by Emily Nielsen that promotes the visual art talents of participants in the American punk-rock scene in all of its subgenres.

“I worked with Emily on the earlier show, and she’s really come a long way,” Cruz says. “She’s a machine now, and she’s been doing a lot. It’s a pleasure working with her. It’s nice to see the whole thing blossom. I’m glad I’m a part of it, because I think that it’s still in its infancy, and there’s a lot of great artists out there. You know, I think every band needs that artist. I think it’s essential for a band to have somebody that has an artistic mindset. Hopefully her Punk Rock & Paintbrushes [series] can draw that out.”

For tickets and more information about the Cruz/Caballero event, point your browser over here. 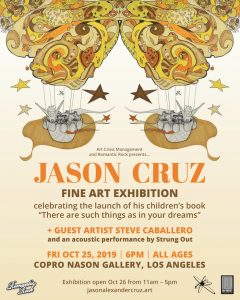