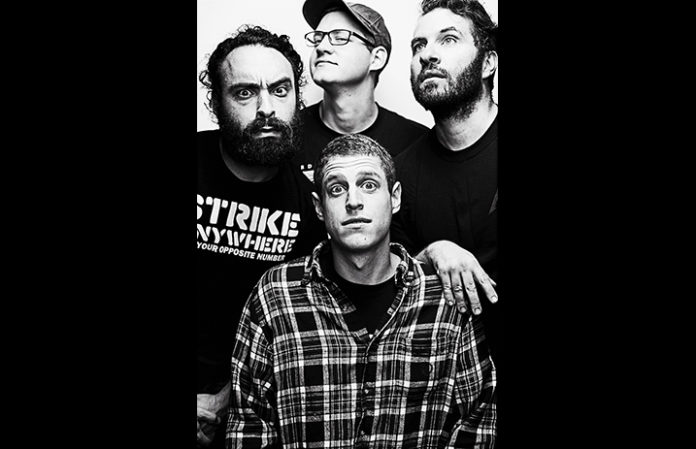 Melodic punk shredders Such Gold are premiering one of their catalog's catchier cuts with us, “Ceiling Stare,” taken from the upcoming EP, Deep In A Hole. Dig into our new interview with the foursome and tour dates below.

Also, sign up for the label's newsletter and they'll send you a Such Gold sticker free of charge.

PRE-ORDER DEEP IN A HOLE FROM BIRD ATTACK RECORDS (Out Sept. 8)

This is a very DIY release for Such Gold. Is that a new thing?

Jon Markson (bass, vocals): I run a recording studio in Brooklyn called The Gallery Recording Studio. Such Gold has been doing a lot of our writing and demoing there for the past few years. I’ve previously avoided producing our records because we’ve been able to work with some of our favorite producers like Bill and Jason at The Blasting Room. The process was completely different this time around. We sort of made a subconscious decision to do the record ourselves. To begin with it removed a lot of formalized pressure—we weren’t beholden to anyone’s budget to recoup, we set our own timeline, etc.

Additionally, creating this record basically became an extension of the demo process, which was beautiful. Ideas and songs coalesced into final products suddenly, naturally.  We’ve been recording new songs for the past few years and naturally found ourselves zeroing in on these five as a cohesive piece of work.   We got to experiment a ton with guitar tones and vocal delivery to give each song a specific vibe.

We really trust each other as players and writers, and it was awesome to have my bandmates’ trust in producing the EP.  When we finished, we took it to The Blasting Room in Fort Collins to have Jason Livermore mix and master it. I was tweaking some arrangements right until the very end. Like our previous LP, the New Sidewalk, we felt that it was important to have our new record bare some of his sonic imprint.

Matt Covey (drums): Near the end of tracking the EP, Jon suggested we put me in front of a mic to try a couple of quick things. It clicked right away. I ended up doing a bunch of harmonies and all the screaming vocals that made the cut. If it were a typical studio session arranged by a label, we probably would have approached it a lot more carefully. It's hard to know for sure, but I'd bet that the freedom that came with tracking the record ourselves affected a lot more than just that one vocal element.

How many long nights went into making this on your end? Did it ever become an obsession?

Kotin:  The writing process always becomes an obsession. I can think of a lot of sleepless nights driving back and forth from Brooklyn and Rochester working on this record. A typical day would pretty much be recording guitar parts all day and then trying to get Jon’s friends to buy me drinks at night. We got to experiment a ton on this release. Sending our vocals through whammy pedals. Trying to channel the Ouija demons in the live room. It was a lot to get done, but it never felt like a chore. On the New Sidewalk, I pretty much sat on a couch and wrote the lyrics and melodies while watching Snow Piercer on repeat. This time around was a bit different. Jon and I spent a week holed up writing the lyrics and the melodies in a very collaborative way. This is the first release to feature a song that has Jon as a lead singer.

Jon, when you're not playing shows, you're pretty busy in your studio, the Gallery. What else have you been working on?

Markson: Such Gold fans know that we have a couple rotating guitar fill-ins. Both the guitar player and the bass player for the band DRUSE have filled in for us before. I just finished their debut LP, which should be out early next year. Awesome Touche Amore meets Tera Melos music with some incredible lyricism and songcraft. I’m also currently working on our old guitar player Skylar’s debut LP as Growing Stone. It’s like Sun Kil Moon, Pinback and Elliot Smith rolled into one. We spent the last week writing and recording string arrangements.

Covey: I actually tracked drums for the debut Patch Kid release, which Jon engineered and produced at the Gallery. Sam (Patch Kid) became a good friend as a result. His music is filled with smart, slick, math-pop earworms and was a ton of fun to be a part of. It's hard to describe how much I love working as session drummer, so it's super sick to be one of Jon's on-call musicians at The Gallery.

The EP is kind of a lost art, but how the band got its start. What made you go the short route again?

Markson: The truth is we’ve had a ton of songs in the pipeline and we could tell these five worked really well together from the start.

Nate Derby (guitar): Like you said, the EP is really how we got our start. I think it just made sense and felt right to just say “let's go back to our roots” in that regard. A completely ripping short release can be just as special as an LP if it's done right.

What was the last time you said to yourself “This is the BEST set I've ever played!”

Covey: I'm not sure I've ever felt that way about my playing [laughs]. But, some sets come very close. Our set at Punk Rock Holiday 2016 in Slovenia is one of those. The crowd at the beach stage and the vibe all over the festival was so truly beautiful. Even when the stage power died mid-song, it couldn't put a dent in the energy we shared with the audience.

Kotin: We shut down the system.

So, everyone is living in New York State again. How's that going?

Markson: Even though we all live on the same coast, getting everyone together can still be tough. Rochester and Brooklyn are still a full day’s drive apart from each other. The upside is that we put extra value on the time that we spend together on the road and in the studio. It puts us in a headspace that whenever we get together, we are stoked to dive in head first into the band. There is no greater high than creating with other people, especially those who you share so much chemistry with. We get giddy when we come up with riffs and concepts together. The relative distance brings us closer.

The Fest in Gainesville is a huge destination for punk every year, what do you hope to accomplish down there aside from an insane set?

Covey: It’s a trend we hope catches on. Buy a bottle of gas station champagne and leave it marinating in a hot tour van for a few hours. Then drink it in a parking lot. Fest is really the perfect venue for it.

Such Gold started almost ten years ago. Does it feel like you're one of the last bands standing from that era?

Covey: It always sucks to see great bands go, no doubt, especially friends' bands. But, right now is an incredibly exciting time for punk and hardcore. Fans seem to be less interested in bands sounding any one type of way. Instead, they seem like they're interested in the range of what punk music can be. Between Such Gold and our friends and contemporaries, who are succeeding at opening a different door for themselves—bands like Pup, the Flatliners, La Armada, Stray From The Path, Lemuria, The World Is A Beautiful Place…, War On Women, Pears, After The Fall—it's clear we're giving fans the new range they want from punk. It’s an awesome time to be in a band, as well as to be a fan.

Do you think that the band's longevity comes into play with veteran punk bands that have taken you on tours? Seems to be happening a lot more in recent years.

Derby: Absolutely. Personally, I feel we're nearing or are at the height of our craft now. Becoming tourmates and friends with bands that have shaped our musical lives, like Descendents or A Wilhelm Scream, is something we all find hard to believe at times. But one thing that's clear to us from getting to know those guys is that the amount and quality of material you put out is what matters most in this business. To hear from those type of punk and hardcore veterans that we're on the right path makes it a lot easier to stay focused and not get too invested in the parts of this life that are downers. It's a new world out there for this band, for any band, than it was in 2009. We couldn't be more ready for it.