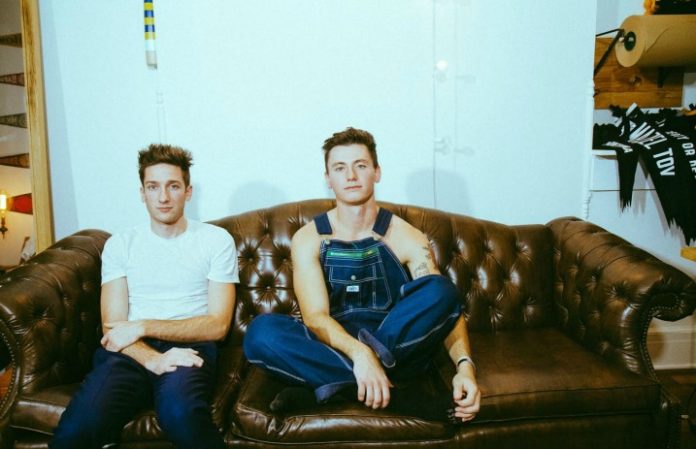 Starting into this new year strong, up-and-coming band Super American have signed to Take This To Heart Records. The band are premiering the music video for their newest song, “Sloppy Jazz,” which is the first single from their upcoming album Disposable.

The album features a mix of classic '80s and '90s pop-rock-inspired songs that reflect the youthful energy of the band.

Directed by Andy DeLuca and inspired by vintage-type filmography, the video’s band shots and imagery of flowers complement the carefree nature of “Sloppy Jazz.”

“We made the video with Andy DeLuca—a world class talent. We're constantly inspired by his art. This year alone he's worked alongside Kendrick Lamar, the 1975, Wolf Alice as well as Late Night With Seth Meyers,” says frontman Matt Cox. “[We] filmed on the sixth floor of the 700 block of the theatre district in Buffalo, New York. It was hot as hell. We made it work with what we had and tried our best to be resourceful creatively.”

Cox recalls his story behind the song, in which his previous work as a groundskeeper for a golf course meant spending a lot of time listening to music and soul-searching through the day.

“I was working as a groundskeeper at a golf course where essentially my main responsibility was listening to 45 hours of music a week. Great gig— tons of sun, tons of coffee, great exercise and employee perks like free golf and being able to piss in the woods,” he begins. “I'm not necessarily an introvert, but it's an introverted role and the timing permitted, coming at a time where some imperative soul searching was needed. Some constructive, positive, productive thinking. You know, like picking the flower bed for weeds and listening to [Van Van Morrison's] Moondance or mowing greens and spinning [Blink-182's] Dude Ranch. Sometimes just catching shade with Ben Kweller (the highlights of that spring). That type of stuff. It sets you straight. It gets you going in the right direction, and there is something exciting about driving to work before the sun's up, especially in the van.”

Disposable will drop April 7 via Take This to Heart Records and is available for pre-order here. Check out their video below!