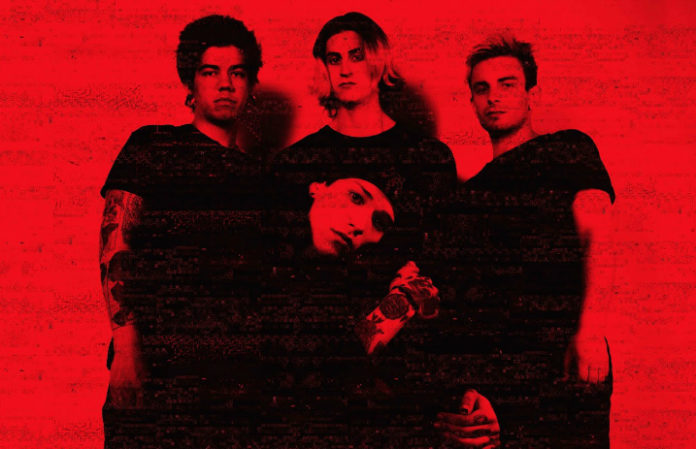 Heavy band Sworn In is gearing up for the release of their upcoming album ALL SMILES, out June 30. We caught up with vocalist and songwriter Tyler Dennen to get all the details about the meaning behind the new tracks. The band also dropped a brand new video for “Dread All,” which you can watch below.

This song touches heavily on the physical aspect of romanticized masochism in the form of desiring sexual sadism. Relaying through blunt unfiltered honesty that without the sensation of pain, no other sense or feeling registers or carries any weight. Historically, I had written about wanting to die, to kill myself, and it was always in this self-deprecating way that painted me out to be a victim to my mind and the world around me. The last line of “Make It Hurt” spells out the difference between all of our historical lyrics and our current ones. I got a glimpse at why my mind had autonomously jumped to unresolved, vague suicidal pleas lyrically. I have discovered I don’t want to take a bullet or a noose, I don’t want to end it all because this world is some cold dark unforgiving place. It’s the feeling of being brought to the brink of death, left to soak in my draining blood by the hands of another… while watching that person wipe their hands clean as they walk out of the room and through the door. The darkness inside of me is in love with giving up all control and being left to die by the hands of the murderer, while they sit and watch, unfazed. This song makes clear one of the themes that is consistent through the record, and that is that I am not a victim. I do these things to myself. I actively seek pain.

This is a subject specifically regarding the sexual side of the theme, which is not often enough spoken about through a male perspective—being submissive and giving up control, allowing another to treat you as though you’re disposable both physically and emotionally due to the sexual thrill and the emotional need exists equally as true throughout the gender spectrum, and many feel as though, as a male, this is an unacceptable trait.

This track explains in the least refined way the result of the internal conflict that manifests when dissociation and depersonalization continually have fatal head-on collisions inside of the mind. Throughout late 2015 through the end of 2016, I was living on my own for the first time in Milwaukee. During this period of time Sworn In was extremely inactive, coping with unexpected changes/situations and on the verge of calling it quits. I would find myself questioning whether or not the constant blur and haze I felt each and every time I would take a step outdoors was the result of the world around me being a facade, leaving me to feel like the only person to exist; or if I was the one who didn’t exist and that the world around me didn’t see me; and if they did they saw me as something that had no place existing in their reality, like a bug or glitch. The feeling of peering eyes burning into my flesh and bone started to become more and more of a constant as the weeks and months continued. At a point, it became irrelevant whether or not I was being looked at in a way that felt ostracizing from either the world or myself. Even if I knew nobody was looking, I’d assume that they were, and my projection onto the world in combination with the instances in which it’s true led to the terrifying internal conflict. The phrase “Don’t look at me” was something I’d say to myself inside my head several times a day. I’d never say it aloud, rather, I’d stare at my feet and think to myself, “I don’t exist to myself, so what the fuck do you see?” along with several other excerpts from this song. Countless times, I’d be putting gas in my car, walking into a store, walking down the street and even sitting on my own porch, and I’d catch the quickest peripheral glimpse of repulsed yet perplexed eyes staring through me. When I had enough courage, I was able to overcome the anxiety that would result; I’d shoot two sharp daggers of a glance back, which was met with an averted gaze and obvious discomfort. So, when I felt these eyes (whether my assumptions were true or not) it felt as though I was experiencing dissociation exclusively. And when I’d attempt to meet that gaze and nonverbally relay to another that I’m aware of the holes being burned into me and be met with an opaque attempt at covering up their actions, I felt as though I was experiencing depersonalization exclusively. Lyrically, this was my first completed piece on All Smiles, and it opened the door to speaking truthfully, genuinely and without filter about thoughts I’ve felt since I could remember but didn’t have words for.

This track is the sonic embodiment of the complete refusal of natural emotional response or instinct—emptiness resulting in hollow smiles that allow me to continue neglecting myself and mental state. Essentially, when all of the unintelligible voices roar in unison at each other inside of my head and articulating even one is impossible, the only thing my brain could do was force my mouth to curl into a toothless smile.

This song delves deeper into the changes that occur while manipulating oneself. In this track the “Bad Bad Man” is introduced, who is the personification of self-victimization, in which a darker part of my psyche takes over in a way to “even a playing field” even though there’s no competition. Also touches on several central themes such as dissociation and depersonalization. Essentially, it’s unwarranted and unjust anger misdirected at someone else in order to ignore the anger toward oneself.

Mirror fear is all about body dysmorphia. It’s about looking at your reflection and being not only dumbfounded by the foreign nature of what you’re seeing, but repulsed as well. It’s about having zero perception as to what you look like physically, and only being able to see distorted, morphed versions of yourself that drive you deeper into an unhealthy obsession. This song touches on the subject of anorexia, body dysmorphia, spacial awareness and anxieties related to physical appearance.

MORE TRACKS AND NEW VIDEO ON NEXT PAGE