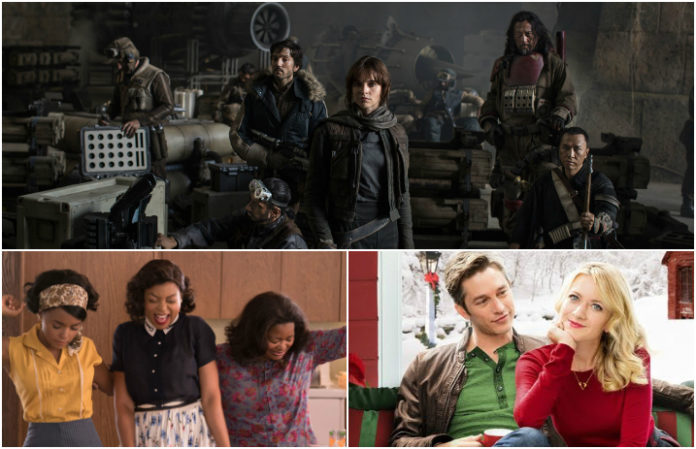 Do you think Santa started writing his Naughty and Nice lists to read more like a listicle since they’ve become so popular to the general public? They’re just so easy to digest—it could give his elves a bit of extra humor in their lives, especially after they spend hours every day writing up incorrect IKEA assembly guides to give to the pre-reformed Grinches of the world.

Even those people who end up on the Naughty list get the chance to see a great movie or two this Christmas season, a time when Oscar bait, delightful musicals and cringe-worthy holiday romances all have their chance to shine on big and small screens.

Rogue One
For fans of: Cheeky robots, war movies and watching everything you love die.

This movie may be the bleakest Star Wars movie released to date, but it’s still a Star Wars movie: There’s a wisecracking robot, a dashing hero and some grumpy old men reminding us how important the Force is. Felicity Jones plays Jyn Erso, a criminal whose life has been made difficult by a complicated family situation. She helps the Rebel Alliance locate and steal plans for the Death Star, but needs to face down the overwhelming might of the Empire in order to do so.

Moana
For fans of: The Legend Of Zelda: The Wind Waker, Mad Max and The Old Man And The Sea if it was filled with happiness and coconuts instead of despair and harpoons.

Yes, this came out last month so it technically isn’t a Christmas movie—but the best Christmas movies serve as an entertaining escape from reality, something we all so desperately need after the shitshow that was 2016. What’s a better counterpart to the snowy landscape blanketing much of America this time of year than a story set in the tropical islands somewhere in between Mexico and Australia? Join Moana, voiced by Auli'i Cravalho, and Maui, voiced by Dwayne Johnson, as they set out to return the long-lost Heart Of The Ocean in Disney’s latest musical.

Hidden Figures
For fans of: Smart people saying smart things, Good Will Hunting if you want a movie with fewer shots of Matt Damon and a few more of Octavia Spencer, strapping someone into a rocket and launching them into outer space with the chance that they will explode.

Sorry Rogue One, you don’t have a monopoly on great space movies this Christmas season. Hidden Figures stars Taraji P. Henson, Octavia Spencer and Janelle Monáe as Katherine Johnson, Dorothy Vaughan and Mary Jackson, three people integral to NASA’s success as they begin to expand humanity’s reach out to the stars in the 1960s. If genius-level intellect isn’t enough to sell you on the concept of this movie, the soundtrack alone should convince you to give it a chance.

My Christmas Love
For fans of: Interchangeable attractive men, awkwardly turning your face away from that one aunt who drank a bit too much eggnog this year and just needs to give everyone a kiss on the cheek.

No Christmas season is complete until you’re forced to sit through a family movie in an attempt to bring everyone closer together, so this year why not make everyone suffer equally and tune into the Hallmark Channel’s My Christmas Love? Cynthia, played by Meredith Hagner, needs to figure out which of four men is sending her each gift named in “12 Days Of Christmas” so she can settle down and live happily ever after.

Passengers
For fans of: Condemning a complete stranger to a life trapped in a vessel hurtling through space just because you thought they were hot.

It’s like an interstellar Sleeping Beauty without any of the Disney charm. Chris Pratt plays Jim, a man woken up far too early during his suspended animation sleep through the stars, headed toward a new planet about 100 years’ worth of travel away. He decides that Aurora, played by Jennifer Lawrence, would make a great companion on his lonely voyage and wakes her up in an attempt to answer the all-important question: “If we were the only two people in the world and I essentially doomed you to never see the home you set out to reach because it’s a literal lifetime away and we’ll both die of old age before it comes into view, would you bang me?”