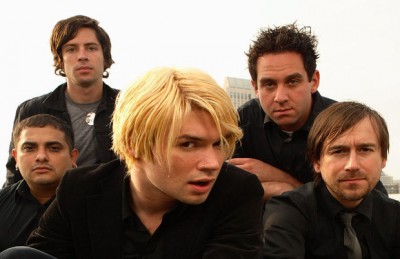 Before Taking Back Sunday settled into the Taking Back Sunday lineup you know and love, they had a slightly different configuration: Eddie Reyes’ pal Antonio Longo was the vocalist—and a kid named Adam Lazzara was on bass. Of course, the latter eventually settled into the frontman role after Longo departed from the band, Shaun Cooper joined on bass—and the rest, as they say, is history. Read on below to find out how TBS as you know it coalesced—and how the band fit into the Long Island scene in their early days. Don’t forget to check out part one of our TBS Oral History excerpt, right here. And, of course, pick up AP 276 to read the complete Oral History of Taking Back Sunday.

ADAM LAZZARA: There was always a little part of me that wants to be Daryl Palumbo, but I never thought I would end up being a singer… When Antonio wasn’t in the band anymore, it was really like Eddie saying, “You’re singing now.” I remember getting into his Windstar with that demo and just driving around singing those songs, just to make myself actually do it. I always remember Eddie telling me, “You’ll be fine, don’t worry about it.”

JOHN NOLAN: Adam and I hit it off pretty quickly and spent a lot of time just talking about things, standing outside, drinking and talking and smoking cigarettes until 5 in the morning. We’d always get into these discussions. We started showing each other the things we were writing, and we both really responded to what the other person was doing.

LAZZARA: There were a lot of similarities. He was raised real Christian and I was raised really Catholic, so those talks would go on for hours. I made a great friend in John. When we shared a room, there was a while where I had to get up at like 5 a.m., because I was waiting tables at this restaurant down the street. We’d hang out and I’d be like, “Man, I have to go to bed.” We’d write a little bit leading up to that, and then he’d be in the car, because there was nowhere else to go in the apartment where he wouldn’t wake anyone up. He’d be in his car drinking Nyquil and writing, trying to fall asleep, and then the next day he’d be like, “Check out this thing I have.”

NEIL RUBENSTEIN, TOUR MANAGER 2002-2003: I’d hang at the apartment and they’d have their acoustic guitars out, working on songs…One day Adam was like, “I’m going to use this line of yours,” and I made a joke, like, “Ok, you can use whatever you want, but I get a gold record.” Then I actually <em>got</em> a gold record, so it was fun.

LAZZARA: With me, Neil Rubenstein and Jesse [Lacey] and John [Nolan], we called it the “Long Island Band Pool,” because basically Neil would have a line and he’d be like, “Hey I have this line, but I can’t find any place to use it, and I think it’s good. Do you think you can use it?” and I’d be like, “Yeah, I have this one here, maybe you can expand on that,” so it was a real communal thing happening at the time. I really felt like part of something. I felt part of that scene, and that was important to me.

MARK O’CONNELL: We had to get a bass player, and that’s when I was like, “Shaun [Cooper]. We have to get Shaun. Give him a shot.” It took a little convincing, because they didn’t know him and he was this dorky, awkward kid who liked to wear wrestling shirts a lot. But he came down and played, and they were like, “Cool, this works.”

LAZZARA: When Shaun came in, he could really play the thing. He was doing the “Charlie Brown” song, by playing the baseline with his left hand and just tapping the lead part with his right hand, and that was just the best bass playing I’d ever seen in my life. I was like, “Oh my God, people can do that?’”

Armed with a growing song arsenal, TBS hit the studio and recorded another demo with classic Long Island producer Mike Sapone (Brand New, the Movielife, Crime In Stereo), then set out for some major DIY touring in Reyes’ Windstar minivan.

O’CONNELL: We booked our own tours, got in Eddie’s minivan and worked our fucking asses off. I was in my first semester at Nassau Community College, so in the morning I was going to school, in the afternoon I was going to work and at night I was going to practice. We were practicing from 8 at night to 12:30 or 1:00 a.m., Monday to Friday. We were dedicated; we knew we had this special thing going on and it was our job. We’d go to a shitty little room in Lindenhurst and play and write every single night.

LAZZARA: There was one time where Eddie was on a deli delivery in the Windstar and there was something that spilled and had gotten under the carpet in the van, but he thought he had cleaned it up. A couple weeks later, we were going out some place and the van smelled like vomit, baby spit-up, dudes and rotten eggs. It was the worst-smelling thing. It was so hard to sit in there, and eventually he got it properly cleaned by somebody else, but that whole time was just awful.

EDDIE REYES: I wouldn’t let anyone else drive it. Adam refused to drive, because he was the singer. The only other trustworthy person was John Nolan; he was calm. But Shaun Cooper was never allowed to drive, because he’s like a shaking chihuahua—always on edge. Mark was never allowed to drive either, because he’s got fucking ADD, so he’s eating a doughnut and looking for a CD, and never looking at the highway. If the tempo of the band he put on got faster, he <em>drove</em> faster. The only way I got through it was drinking a case of Mountain Dew everyday and eating burritos in the front seat, because I drove day and night. That’s the reason I got fat and lost all my hair. [Laughs]