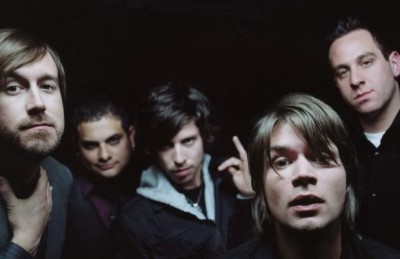 After Shaun Cooper and John Nolan left Taking Back Sunday, the band replaced them with guitarist/vocalist Fred Mascherino and bassist Matt Rubano. The new lineup recorded 2004’s Where You Want To Be and 2006’s major-label debut, Louder Now. Tensions within the band started growing during the recording process for the latter, although TBS soon had something much more serious to worry about: frontman Adam Lazzara’s substance problems. After you read on below, don’t forget to check out part one and part two of our TBS Oral History excerpts. And, of course, pick up AP 276 with the complete Oral History of Taking Back Sunday for more never-before-discussed details.

ANGEL JUARBE, FORMER SALES/A&R, VICTORY RECORDS: When they'd finished recording Louder Now, Adam had come back to the apartment, and I noticed that he started staying out all night. Normally, he was like clockwork: He'd go out to a bar, the bars would close at 4 a.m., he'd hop into a cab and [he’d] be back home at 4:30. I could basically set my watch to it. But he came back from L.A. and would suddenly be coming back at 9 or 10 in the morning. If you knew that dude, he was not up at 8 or 9 in the morning, and if he was, he'd be fucking cranky. But suddenly he'd come back home wide awake, wired. He was home barely a couple of weeks and Jillian calls me; they had gone to England and he had disappeared right before they were supposed to go to the airport, and nobody could find him, and apparently Fred thought he was high when they played.

ADAM LAZZARA: [Drugs] were never a thing I needed. I've always used that stuff as a crutch. Right when we were done recording Louder Now and we were waiting for it to be mixed and doing all the artwork for it, they had his intervention. But the funny thing about the intervention was that my girlfriend at the time wasn't there, Mark and Eddie weren't there—it was Matt Rubano, Fred, and Jillian and Angel.

JUARBE: We got a hotel room, and Fred called Adam and made him come have a meeting with us about the new record. About five minutes into it, he says, “I've gotta smoke a cigarette” and starts heading for the door. I go after him because I'm afraid he'll take off. We're downstairs in front of this hotel, and he's smoking, and I'm like, “Dude, this probably seems really shitty and you probably feel like you're being attacked right now, but this is only because people care about you. I've always said that you're the little brother I never had, and if you saw your little brother acting the way you are, you'd do the same thing.” He came back upstairs and he listened to everybody for a while, and then he was like, “Okay, I'm over this,” and left.

FRED MASCHERINO: We told him that night that if he didn't do something—he was even convinced that he wouldn't live to 30—we were all convinced that he wasn't on a good path. Matt and I said, “If you don't straighten up, we're not going to be in the band with you.”

JUARBE The next day he comes home and says, “I don't want to talk about it, but I'm going to go to rehab Friday.” The day came when he had to go, and they sent a car to get him, and he basically did everything he could to stall. He was freaking out, crying, and he's like, “I can't deal with this. I can't not drink at all.” It was really tough and hard and weird, but he went. I literally wrote him a letter almost every single day, and he'd write back to me, and then he called me from rehab once, and I went to visit him once. He was miserable; he hated it. I think he understood it was for the best, but he hated being there, hated being around the people, all these meetings. He said to me, “What you said in front of the hotel—that's the only reason I went.”

LAZZARA: So I went in this program thing in Baltimore, and it was a really cool place. What was cool was this priest started it, so it was getting back to the faith I had grown up on. I never felt like I really needed to be there; I felt like I went because I was just trying to please everybody, make everybody happy. As they'll tell you when you're there, “Oh, that's just a sign of your sickness,” but I was like, “I'm not sick, I'm just miserable and bored.” I was just there for a month. During that time, there was already press starting for the record, but it wasn't out yet.

JUARBE: In hindsight, I feel like it was really bad timing how it all went down, because it was like, “Okay, you have to go to rehab,” and then it was like, “Okay, now you've got to go on tour,” so he didn't have a chance to really make the effort. I don't know if he really wanted to make the effort, but he tried for a little while. We were back on tour, he was drinking again, and you can't help someone if they don't want to be helped.

MASCHERINO: It was only an issue when it affected our stage performance. We went to Australia for the first time, after his rehab, and he was sober that whole trip. Man, he sang so awesome every night. He sounded amazing, and we were so shocked and impressed. But a year later we played a show that was televised worldwide, and it was not the case.