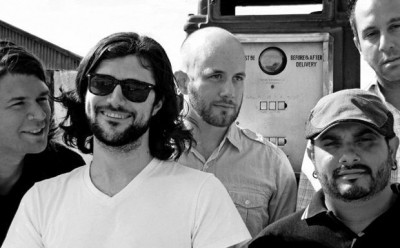 In 2010, Mark O’Connell’s never-ending campaigns to bring his friends John Nolan and Shaun Cooper back into Team TBS finally bore fruit. Reconvening for the first time in seven years, the reunited quintet started writing a new album. The result of these sessions is a self-titled release, which is due June 28. Beyond providing needed closure, the reunion has put the band in an enviable position for the years ahead. If you missed any of our bonus cuts from the TBS Oral History, head here, here and here. And, of course, pick up AP 276, whose cover story has the complete, uncensored Oral History of Taking Back Sunday.

MARK O’CONNELL: I wanted John and Shaun back in the band the whole entire time [they were gone]. Taking Back Sunday was never the same for me after John and Shaun left. I was not happy throughout those years, but I stuck it out. It wasn't an easy time for me, especially. I think it was the hardest for me, but it wasn't easy for anyone.

JOHN NOLAN: Even before Mark talked to me and Shaun about it, there was something happening for me, just the point I was getting to in my life, where I was kind of starting to think every once in a while about Adam and what he was up to and how he was doing, and it was the first time where I would have anything other than resentful or angry feelings toward him. He'd kind of be on my mind a little more, and Eddie, too. I don't know what it was, age, or getting to a certain place in life, and looking back more fondly than I had before.

O’CONNELL: At this point Adam and I were cool again—I could talk to him about stuff—and I was like, “Either John and Shaun are coming back or I'm not doing another album.” I didn't give a shit, it wasn't fun. Shaun's fiancée’s sister had a gathering at her apartment, and I was like, “Shaun, I'm gonna get the band back together.” He started laughing, and I was like, “No, for real.”

Idle talk eventually lead TBS to an under-the-radar gathering in, of all places, a pecan farm outside of El Paso, Texas. What happened next, nobody could have predicted.

EDDIE REYES: [The studio] was outside El Paso, Texas, at a ranch out in the middle of nowhere. It was beautiful where we were, surrounded by mountains. We were on a pecan plantation and the guy who owns it has a giant farm, thousands of acres, and in the middle of it he has these small houses that are recording studios. We all flew in and it was like, “Alright, I haven't seen you in eight years.” We gave each other a hug, and got really drunk and partied the whole entire day. Everyone got to let all their feelings out and threw all their shit on the table, and we were friends again.

SHAUN COOPER: There was a lot of beer at first…We start talking and shooting the shit and drinking, and drinking more. We all wound up getting really drunk and Eddie went out on the town, while the other four of us tried to play some Taking Back Sunday for the hell of it, but we were way past the point of being able to use our hands to play instruments. Mark tried to play half of a song, and he's like, “I can't play drums,” threw down his sticks and went to bed.

ADAM LAZZARA: When John and I stopped talking, there was a lot that was left unsaid. There wasn't a whole lot of closure. A lot of it was being played out in the press or on those gossip sites, so there was always a lot of speculation, like, “Dude, I heard you said this.” It was really awesome to have this friend back. I don't really get too close with anybody, and John was definitely one of the last people I was that close with, and that needed to get talked about, but we needed to do it face to face. I remember Shaun trying to slowly back out of the room.

The next day, rather than going over old stuff, we just started working on new ideas. There was one thing I had that was really slow, and I showed it to Eddie and he sped it up and it became “Best Places To Be A Mom,” and then things just started to fall into place after that.

JILLIAN NEWMAN: I'm a bigger fan of the heavier songs, the more aggressive songs, and I think the record's super heavy. It's a rock record. They have their soft spots and their poppy spots, but there's a lot of aggression. It's incredible to watch Adam write with John again, because there was a point where Adam was doing all the lyrics, and I think there was a lot of pressure in that. To have a collaborator that you really trust is really important.

NOLAN: Lyrically, I think a real big theme that kept coming up for me and Adam is the issue of being an adult with a real life and a long-term relationship or marriage, and trying to make that work. I think we were also just influenced by thinking about a lot of people we know, and seeing the way their relationships have played out in bad ways. You get to that point where you're old enough to start seeing your friends divorce, and you're married and a real adult and you're looking around and still feeling like you're 17, but you're not.

COOPER: I feel like with Straylight [Run], we just got too weird and lost track of solid songwriting. It was way too inconsistent. Up until we started recording this new Taking Back Sunday record, John wanted to deny himself the unbelievable hooks that come to him, for something that doesn't come to him as easily. He has been given a great gift. But for a while he was like, “No, that's too poppy.”

NOLAN: When we were talking about writing songs for the Taking Back Sunday album, we were talking about just trying to write really good songs—solid, good songs. Thinking about that, in the past I lost sight of that to some extent, getting lost in experimentation and trying to find these different ways and directions. I was ready to just try to write a good song and appreciate it for what it is, and not try to force it…I think I took a lot of things for granted at the beginning of Taking Back Sunday, like how easy it was for us to get shows and tours, and I'd think, “Well, I want to be at home taking it easy right now. I want to relax and not do this,” and it's a pretty childish attitude to have. I think at this point in my life I have a different perspective.

NEWMAN: It's fun again, to be able to call John and Shaun and tell them we're playing main stage at Reading [Festival], and ask, have they ever even played Reading? I'm still getting caught up on their history and their time in-between. It’s going to be fun for them to experience things together, especially with the amount they hang out together, as opposed to five people going in five directions…The one thing I love most about John and Shaun being back is that it's so freeing. To me, there's never, ever going to be a different incarnation of the band, so it's like the freedom to just be who you guys are as a band and be that forever.

REYES: I listen to this [new] record and it gives me chills, like when I first listened to Tell All Your Friends in my car. It's an awesome record. I'm so proud of it, I'm so proud of being a part of it. We all wrote this record.