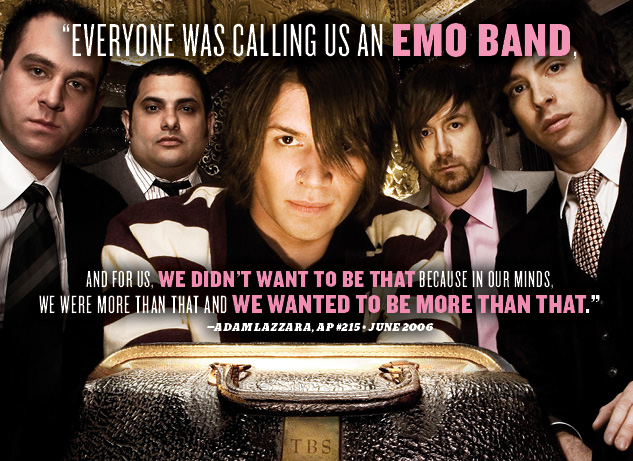 On April 25, 2006, Taking Back Sunday released Louder Now, their first of three records under the Warner Bros. imprint and second album with former Breaking Pangaea guitarist Fred Mascherino as part of the equation. The release was the group’s highest-charting album ever, landing at No. 2 on the Billboard Top 200, while going platinum in the U.S. and silver in the U.K. For good measure, it also contained the lone Taking Back Sunday single to ever crack Billboard’s U.S. pop charts—“MakeDamnSure,” which climbed as high as No. 41.

As the 10th anniversary of the album approaches, we called singer Adam Lazzara to reflect on memories of recording their first major label album, how the band came up with the bridge to “MakeDamnSure” and where these 11 songs (not including the special edition bonus tracks) rank in his band’s history.

Do you remember how you guys got some of these songs together?

We had a space out on Long Island—we shared the space with this band called the Sleeping—and some of the early sketches for the songs kind of came out of there. It was actually a pretty great time for us because it was our first record for Warner and we had just come off tour, so we treated it kind of like a normal job. We kept those hours. We would go in around 10 in the morning and then just stay for however long. Some nights, I would just go in later, after the guys, to put melodies and things down.

Yeah, we met with a bunch of producers, but Eric Valentine was at the top of our wish list. At that point, he had done that Queens Of The Stone Age record, Songs For The Deaf, but he had also done that first Third Eye Blind record [Third Eye Blind], which was just single after single. Sonically, the way he was able to make everything sound—we were just like, “We want that guy!” We met with Howard Benson, who had just done [My Chemical Romance’s record Three Cheers For Sweet Revenge], and we met with Rob Cavallo of Green Day fame—they were great guys and everything, but our love of Eric’s work kind of trumped any other meeting we had.

There’s a very tangible difference in sound between Where You Want To Be and Louder Now. It’s a much more full sound, much more tight. What made you want to go in that direction?

For us—and this is something we still apply today—we just always want to keep growing and to be the best band that we can. Through what we were listening to at the time, and with the songs we were writing, we knew we were growing from Where You Want To Be. There were things that we tried, where we were like, “OK, this is too far out. Everybody’s going to think we lost our minds.” Everyone was calling us an emo band, and for us, we didn’t want to be that because in our minds, we were more than that and we wanted to be more than that, and that’s why we took the direction we did.

Do you think that had a hand in wanting to go from Victory to Warner Bros. at that time?

That helped. It also gave us a lot more time. Here we are and we can afford to work with Eric Valentine all of a sudden. So, when we realized that, it was like, “Let’s just make the best thing we can possibly make right now because we have the time to do it.”

Were there any horror stories during the process for this album?

Man, there were so many positive things that happened. [Laughs.] It was an awesome experience, but you know, we had our share of meltdowns. That song “20/20 Surgery”—the chorus was probably the last chorus to come together. I had like seven different melodies and sets of lyrics for it, but nothing was working and it was the most frustrating thing. That one really came down to the wire. The music was there, but I just remember having so many meltdowns about that. Like, “Oh my God, what am I doing? I’ve been able to fool everybody for so long and now it’s coming to a head right when we’re having our big shot on a major label.” Also, it’s not really a horror story, but it’s an awkward moment—in “MakeDamnSure,” right when the bridge happens, there’s this phone message. My girlfriend at the time and I were in this huge fight, and there’s this phone message that she left me. I told Eric, “Hey, I want you to listen to this. I think it could go in the bridge.” He’s like, “Yeah, we should put it in there,” and I was like, “Right? Yeah, it’s fucked up. It’s pretty sad.”

Did anybody sense at all that your time with Fred [Mascherino] was winding down during the process of making this album?

No, not until the end of that touring cycle. That’s when it was really coming to a head. He just wasn’t getting along with everyone. And we were all dealing with what was going on around us in different ways. He had told Matt and I, “OK, this is going to be my last tour with Taking Back Sunday.” It was funny, too, because on that same tour, like a week or two before he said that, he was like, “Hey, I made a solo record. Do you want to hear it?” And, I was stoked because he loved Jeff Buckley and he’s this incredible player, just one of the best guitar players I’ve ever seen play, and he hands me the Discman and after two songs, I’m like, “Fred, this sounds like a Taking Back Sunday record without Taking Back Sunday.” Then, I just remember feeling a little disappointed, like, “Oh, man. Why didn’t you just let it fly?” Looking back, probably after he played me that, I was like, “Oh, wait a minute. I think I know what he’s going to do.”

What made you guys want to go with “MakeDamnSure” as the first single?

We just kind of knew. It’s never unanimous with us, with any incarnation of our band. But with that one, we just knew. And I think that even early on in the process, the label and even Eric were gravitating toward that one. Interestingly enough, with “Liar” being the second single, we weren’t sure. I remember we had a bunch of conversations—should it be “Liar” or should it be “What’s It Feel Like To Be A Ghost?”

Do you have a favorite song on the record?

“Miami” is my favorite song. I remember doing the demo on it and going to Fred: “Hey, man. Why don’t you just cut loose here and rip a crazy solo?” He’s like, “We don’t really do that in this band,” so I’m like, “Well, not until you do it and then it will become a thing we do!” I just love how that song came together, start to finish. Ironically enough, it’s our drummer Mark [O’Connell’s] least favorite song.

Where do you think Louder Now sits within the discography of Taking Back Sunday?

I think it sits right where it should. I think each one is a bit of a progression from the next. Also, I know that’s open to everyone’s own personal opinion. That record was a big statement and then each one thereafter has been the same for us.

What was the statement you were trying to say?

With us, to let people know [that] this is what we’re capable of, and then we’re going to keep moving up. We are a loud rock ’n’ roll band, and we care about songwriting. It’s a very important craft. We wanted people to know that we weren’t just an emo band that came out of nowhere. [Louder Now] opened a whole lot of doors for us, and it would be doing it a disservice to not recognize that.