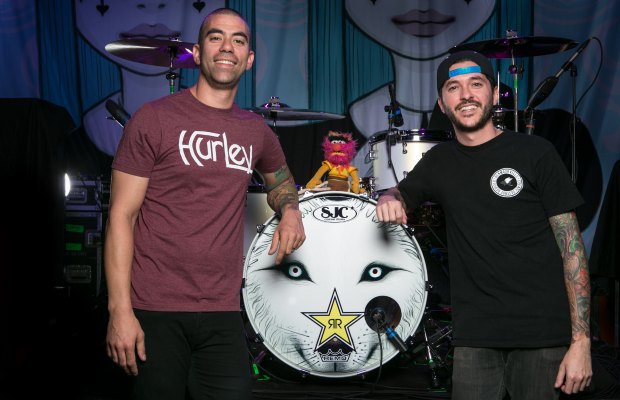 Drummers: Think back to when you were young, and remember who you idolized. Then imagine that throughout the years, you became friends with one of your idols. Then imagine that, years down the line, you were able to sign him up for an endorsement from your drum company. (Oh, right, we forgot: Imagine that you followed your childhood dream and started a custom drum company that has gone on to endorse some of the heaviest hitters, both metaphorically and physically, in AP’s scene.) Then imagine that he in turn hires you to be his drum tech, making him your boss while at the same time you’re kind of his boss because you run the company he depends on for his drums, and you’re both good friends with one another and you still kind of have a pretty serious crush on his playing skills. Kind of insane and seemingly impossible, right? Not so with MIKE CIPRARI, founder of SJC Drums and current drum tech to CYRUS BOLOOKI, the basher behind long-running pop-punk stalwarts New Found Glory. We caught up with the pair before NFG's sold-out show in Cincinnati to discuss the ins and outs of their increasingly complex—and very fun—relationship.

First off, Mike, I think it is funny that you have to watch your creations get beat to shit every night, and you are responsible for making them work again. Is that stressful to you to see the way Cyrus plays? Do you ever sit there and cringe a little bit?
MIKE CIPRARI: No, I don’t cringe because I’ve been a fan of Cyrus’ for the past decade, and I knew that he was a heavy hitter. Since we’ve started working together on this “business” relationship of [SJC] making him drums, he’s not one of those guys whose always got his hand out waiting for something. He is very appreciative and he backs our product, and that’s why I do this sort of thing. I like to go on the road so I can [accomplish research and development] R&D with the company—seeing the problems he has, seeing the things he likes about the kit and the talking points people will talk about, like sound guys and other guys in the band. It’s good R&D to just be out here with him one on one.

CYRUS BOLOOKI: You know, it’s funny because of course I thought about it. Mike’s going to be my tech, and what happens if something goes wrong?

“Dude, this fucking thing sucks!”
BOLOOKI: Yeah, that’s how I would probably approach it. And now that we’re about 75 percent through the tour, the only issues that we’ve had have been with hardware and cymbals, things unrelated to SJC Drums. But about halfway through the tour, just for fun, I was like, “Hey, can we try this back-up snare drum?” That was, like, two weeks ago, and our friend and house guy was like, “Whatever you just did, that’s awesome.” I turned to Mike and I’m like, “See what you did? You can’t even make a snare that beats your old snare.”

So from both perspectives, what were you looking for? Cyrus, were you looking to be endorsed, and Mike, what is it that you’re looking for when you’re looking for someone who is trying to get endorsed?
BOLOOKI: The funny thing is we’ve known each other for a long time. Obviously, just being in this world, I’ve seen SJC, and throughout the years, I’ve seen SJC blow up into this massive company. You go on something like Warped Tour, and the majority of the artists are using SJC kits. I’m a very loyal guy, and Mike knows this and we’ve talked about this. I was with another company for a long time, [but] the company changed itself. So I knew that I needed another company to support me, but there was no real decision. I pretty much knew SJC was going to be the next choice. Mike and I had already met and hung out, and it just so happened that he was in Florida visiting his grandfather about two hours away from where I lived in south Florida. I called him up, and I was like, “Hey, do you want to just come and hang out and have lunch or something and talk?” That day, we spent, like, two hours talking about just everything: where he came from, what the company is about. And that’s where I got the sense that is where all the pride is taken in what he does.