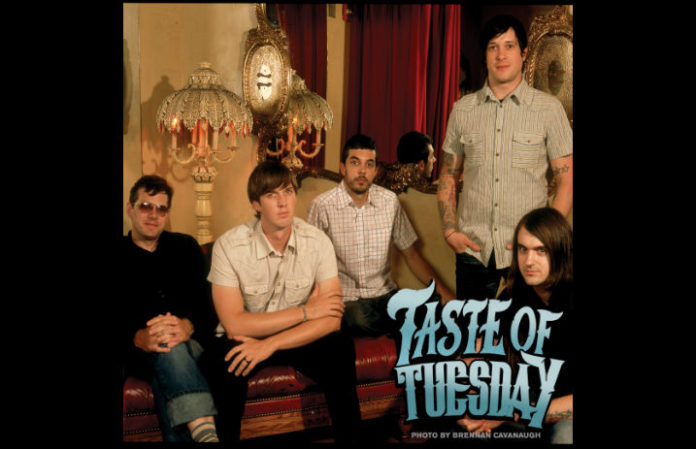 As the reactivated TOC begins its next chapter with a touring lineup of Dashboard Confessional, Taking Back Sunday, Saosin and many others, we'll be starting this weekly special “Taste Of Tuesday,” where we'll look back at the bands participating at the point of their original zeitgeist. It was late summer 2004 when Alabama’s triple-guitar attack team HOT ROD CIRCUIT had finished their second album, Reality’s Coming Through for the mighty Vagrant label. When AP caught up with them (AP 195, Oct. 2004), they were out on the road with Saves The Day, bringing to life some of the record’s harrowing sentiments frontman Andy Jackson was feeling at the time. Now go cue up “Fear The Sound” and read about a band that’s always been worthy of your attention. You’re welcome.

You think you’ve got problems? HOT ROD CIRCUIT watched their labelmates make bank, their personal lives get crazy and wonder what their future may hold. And it’s all on disc.

In a summer when voters’ trust relies as much on uncertainty as it does on confidence, it’s refreshing to hear a familiar and honest voice on the campaign trail. As it did in 1829, that voice belongs to an articulate man-of-the-people named Andrew Jackson. These days, that man goes by Andy and opts for politics of the heart, fronting his road-tested rock outfit Hot Rod Circuit, instead of pledging and polling.

Seven years into their career, Hot Rod Circuit—singer/guitarist Jackson, guitarists Casey Prestwood and Brian Kiss, bassist Jay Russell and drummer Dan Duggins—sit on the fence between an uncertain future and a past they’re in no rush to be remembered for. Which side of the fence they land on will be determined by Reality’s Coming Through, their second release for Vagrant. It’s an album that explores far rockier—and more personal— musical terrain than 2002’s Sorry About Tomorrow ever did.

Today, the band are in Detroit, one stop on a pre-release warm-up tour with Saves The Day. Jackson is sporting a black, red-lettered T-shirt that reads FUCK BUSH, proof enough that his political leanings align with those of his Democratic namesake. “There was a lot of shit coming through,” Jackson says of the year leading up to the album’s completion. “This is really us for the first time. That’s what the album’s about—being completely honest with yourself and making sure you don’t hide anything.”

It was with this approach that Hot Rod Circuit entered the studio in March with producer Tim O’Heir (Dinosaur Jr, Sebadoh) to craft their most unfailingly honest album yet—an emotional excursion through infidelity and divorce, as well as creative and commercial failure. Though Sorry About Tomorrow sold more albums than every previous HRC disc combined, the band view it as a failure when held against the successes of their friends and tourmates, such as Dashboard Confessional and Brand New. “A lot of bands that we’ve taken out on tour,” Russell explains, “they just surpass you so quickly. Music’s not a competition, but we’ve worked really hard.”

Aware that Vagrant bands are among those who’ve surpassed HRC, Jackson says he feels Reality’s Coming Through is a turning point for the band. “It definitely is. We went all out, and it feels more together,” he says. “When I hear it, it blows me away—and I’ve never felt that way before.” Jackson wrote more than 30 songs before the band and the label selected the 11 that fill out HRC’s fourth full-length. In “Failure,” an open acknowledgement of Sorry About Tomorrow’s inability to exponentially expand HRC’s audience, Jackson sings, “I feel like a failure/does anybody care/they say you’re a breakthrough/and you’re on your way there.” As the chorus begins and Jackson cries, “The way that you looked at me/I’m lucky I’m still alive,” it’s as though Vagrant has transformed into a lover scorned and Jackson knows this is his last chance.

“We know that if we don’t sell a lot of records—I don’t want to say it’ll be the end of Hot Rod, but we know it’ll be a big change,” he admits. “That’s what that song’s about: our record as a disappointment, and people in the industry blowing smoke up your ass. We all have families to take care of and bills to pay, and for a while there, it was all just talk and no action.”

Meanwhile, Vagrant seems dedicated to one of its hardest-working acts. “I can’t imagine Vagrant without Hot Rod,” says label co-owner Rich Egan. “They’re a mainstay on this roster, [and] they’ll continue to have a home here as long as they want one. Bands like Modest Mouse have been around 13 years and are just getting their due. For some bands, it takes longer than others. I think that Hot Rod’s going to get there; you just can’t control when it’s going to happen. But I’m pretty confident it will.”

“I’ve been playing in bands for 10 years, and I went to music school and played hundreds of performances in a number of genres,” says Duggins, “and this record is hands down the most confident I’ve ever felt about my personal performance.” After former HRC drummer Mike Poorman amicably left, Duggins, who had impressed the band during a previous audition, was a natural fit. The opportunity to tour and record, especially with O’Heir, enticed the drummer into the HRC fold. “He really wanted us to play the songs the way we’d want to hear them, and not necessarily impose his ideas on us,” says Duggins.

Prestwood, who says he felt ignored by Tomorrow producer Brian McTernan (Thrice, Strike Anywhere), offers similar praise for O’Heir’s work. “Tim brought out in everyone the best aspects of their musicianship and really got behind every song the best he knew how to,” he says. “If there’s something on there that people don’t like, we did it on purpose. So if they don’t like it, then too bad.” The band worked diligently through the recording process, even to the point of carefully crafting songs that wouldn’t make the final cut. Few bands fortunate enough to harmonize with Chris Carrabba (a longtime friend of the band) would leave the results off their most commercially crucial album. But Hot Rod Circuit opted to leave their untitled collaboration (featuring Russell on lead vocals) aside, because, according to Jackson, “Jay was freaked out about hearing his own voice,” a comment that certainly will arouse suspicion. “Although we all loved it, he was just a bit unsure.”

By comparison, HRC were assured about putting their personal lives out there for listeners to experience, no matter what the response.“Fear The Sound,” a song detailing Jackson’s near-divorce from his wife, Brona (the couple have since reconciled), further signals his shift from starry-eyed to self-guided. (Sample lyric: “I’ve got my hands around your neck/and I’m squeezing them tightly.”) He says that while the song isn’t played in the presence of their children, its inclusion was paramount to the depth of Reality’s Coming Through. “It was an intense time,” he explains, “but haven’t you ever wanted to put your hands around someone’s neck? I have to be honest with the band and myself. I was a nervous wreck for a while, but this is our history.”

That history includes a submissive and scantily clad model on the cover of Sorry About Tomorrow. It’s a signifying image that’s heightened HRC’s profile as willful participants in the emo-rock merry-go-round, though Jackson cites indie-rock vets like Archers Of Loaf and Superchunk as key influences, and bristles at the thought of his band being labeled as emo. “Hopefully, with this record, we’re never called emo again. We didn’t come from Jimmy Eat World and the Get Up Kids,” he says, before adding, “I’ve been writing these songs for a long time. If anything, we were ripping off Weezer.”

With so much at stake for Hot Rod Circuit both personally and professionally, it’s comforting to know that in this campaign, honesty, like reality, is coming through loud and clear. For all the times Hot Rod Circuit have been miscast, misunderstood or underappreciated, Jackson’s not bitter. “This is the happiest our band’s been making a record,” he resigns. “It’s definitely the best thing we’ve ever done.” alt