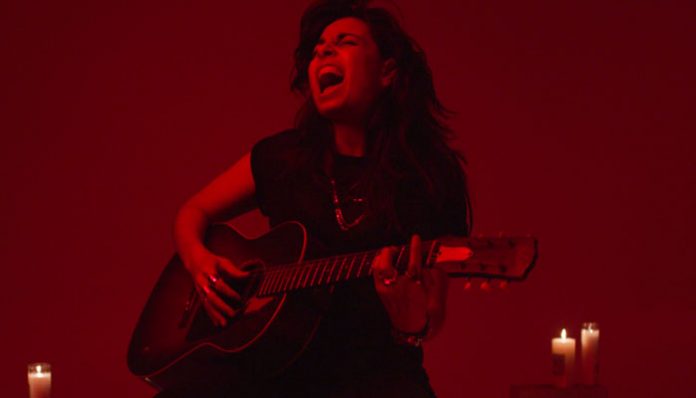 Tatiana DeMaria is just as comfortable in front of a cranked amp as she is playing unplugged in her bedroom. The former lead singer of driven punk outfit TAT makes that abundantly clear on the track “Anxiety,” which AltPress is premiering today.

The British-born artist got on the greater rock radar fronting TAT and doing five appearances on Warped Tour. Since then, DeMaria spends most of her time between London, New York City and Los Angeles, writing music and following where her muse takes her. On “Anxiety,” her deft playing style and stunning vocal ability are part and parcel of her exceedingly rich talent.

DeMaria says “Anxiety” is the first of four digital singles she’s releasing this summer. She’s hoping to put out an acoustic EP of previously released tracks along with some new songs. DeMaria discussed her impetus for writing the song below.

How are you envisioning the final version of “Anxiety”? It feels like it could be an amps-to-11 roar or a pensive atmospheric thing.

The fun fact is that a studio version has already been released under my band name TAT in 2015. It’s a standalone single currently available on all streaming platforms. It was more high octane, capturing that sense of frantic energy that comes with the emotion. I was never stoked on the final mix. I wanted the song itself to come through and to do it justice in a way I don’t think I had done before. So stripping it back felt right. Not sure which direction I would take it as part of my solo work. But I appreciate the idea that it could go both ways.

Is the song a personal purging, an inner voice almost beating yourself up or a commentary on the state of the world?

In the moment, it was certainly a personal purging. I was steeped in adrenaline and trying to get it out of my system as quickly as possible.

It was written in the midst of an anxiety attack. I wanted to capture that feeling that is all so familiar to people with severe anxiety. The inner bargaining we go through to try and get it to stop, the extremities we take our minds and bodies to. And how we can fundamentally believe the most irrational thoughts in that moment and feel like our lives are staked on them.

As someone who suffered from severe anxiety intensely through every year of my teens, I realized people who haven’t experienced it aren’t always truly aware of how it can consume you in that moment.

I realize with COVID challenging us all in ways we hadn’t anticipated this year, there is a lot of anxiety out there. I wasn’t trying to release something on the nose at all. But having overcome it fully, it aligned with being a decent time to share it along with some tools that helped me get through It. I went on a deep and vast journey to never go back there again. I haven’t experienced anxiety like I had in about 10 years now. So I’ll be sharing some resources and thoughts on my socials and platforms around the release, in case anyone is interested.

How has living in New York affected you artistically? I was going to say “personally and artistically,” but the two are obviously inseparable.

Ha, that’s a question for a much longer hang. I feel very lucky in that my job has me spending my time between New York, London and Los Angeles fairly evenly when I’m not traveling or on tour. Different cities will pull different things out of you, depending on where you’re at in life.

COVID has meant staying put, which is not something I’m used to. But it’s something I’m actually very grateful for as a small silver lining to the shit show it has brought. I’ve been able to stay put and focus on writing and producing, which has been amazing. I’ve written and produced a movie soundtrack, recorded this acoustic EP [and] some more studio tracks for release. It’s been busy as fuck, and I’m grateful for that.

Listen to “Anxiety” below. Pre-save a copy for yourself right here.