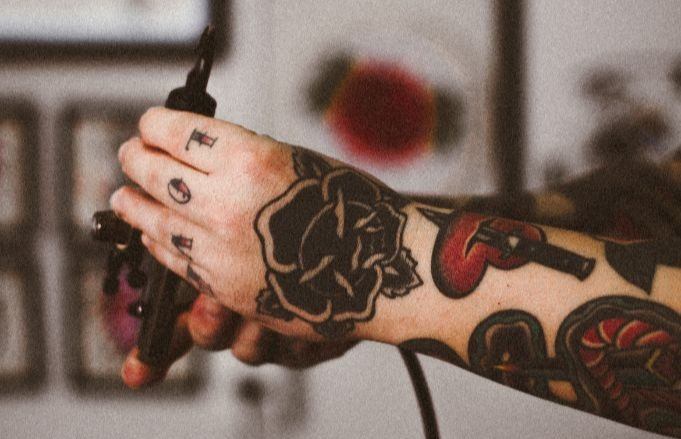 Tattooed people have long been viewed as strange or societal outliers. The overarching American ideology demotes tattoos to low class symbols, and often keeps high-level, high-paying jobs out of a tattooed person’s reach. There is a persisting notion that tattooed people are less educated, less refined and more aggressive than “regular” people—or even involved in criminal activity. However, with each passing year, society does seem to adjust more to tattoo culture, even including it in many mainstream institutions such as television and fashion. So questions naturally arise: Where did the harmful stereotypes originate? Why do they persist? And how has the perception of tattoo culture changed over the years?

When many people hear the name Sailor Jerry, they think immediately of the spiced rum. Behind the brand, though, is the great story of the traditional American tattoo. (In fact, the liquor company proudly states that their product was “crafted in honor of Norman ‘Sailor Jerry”’Collins, father of the old-school tattoo.”) While Collins was certainly not the first tattoo artist in America, he is one of the most notable. His style of tattooing, influenced by his time serving in the Navy and his eventual home of Hawaii, marked the beginning of what we now know as the American traditional style. The majority of Americans’ first tattoo encounters were with his artwork. Collins especially catered to sailors on shore leave, which is how tattoo culture made its way to the mainland.

Class and criminality
Native Americans had been practicing the art of tattooing years before American sailors, but it was this class of men who brought the art into American society. The American bourgeoisie saw sailors as belonging to a lower class, however, and because of that the artform was quickly labeled by those in high places as degenerate. What made tattooing even more suspect was the fact that it was a foreign artform: American sailors received tattoos overseas, after all, in alien lands that America’s elite viewed as strange and uncivilized.

Freak shows
Just because tattoos were seen as symbols of low class or criminality doesn’t mean the American public wasn’t interested in them. On the contrary! Tattooed women were freak show stars who people paid to see. Their photographs could even be purchased for collecting, like people do with baseball cards. In the late 19th and early 20th centuries, viewing tattoos was a form of entertainment, even occupying a spot in the famous Barnum & Bailey Circus.

The logo of one of the oldest, most famous and successful department stores in America was actually inspired by a tattoo. Believe it or not, Macy’s trademark star was made the store’s official emblem in 1858 thanks to its founder, Rowland Hussey Macy. Macy had gotten a star tattooed on him to mark his time as a whaler, using stars for navigation at sea. So while some people on today’s Macy’s staff may see tattoos as indecent or undesirable, their founder surely disagreed!