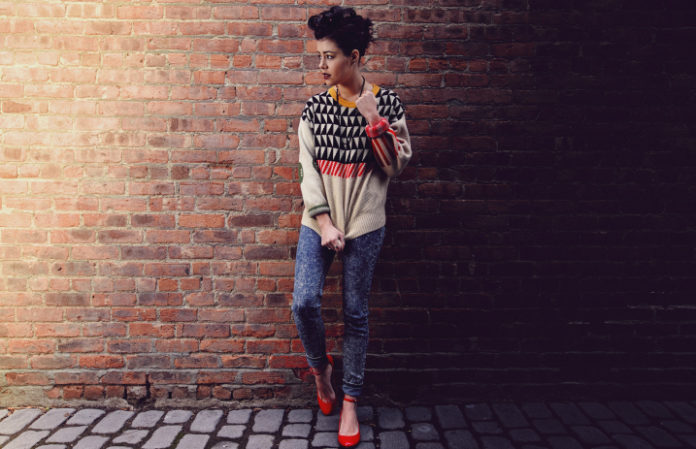 Former We Are The In Crowd frontwoman Tay Jardine shocked fans when she emerged from a long-standing social media blackout to announce new project SAINTE in October. We sat down with Jardine to talk the making of “Technicolor,” fan reactions and what’s next for SAINTE and We Are The In Crowd.

What initially led you in the direction of SAINTE? There’s obviously a tone and aesthetic change. What was the the spark of that?
Just growing as an individual. From [when I was] 19 until now, I was just on the road with We Are The In Crowd and a lot of things get lost when you’re just constantly doing the same thing every day. And when we started writing, I started to really feel like I wasn’t truly living up to the potential that I knew that I had. It’s funny because it’s hard for me to say that, because it’s something that took me a really long time to realize. I think I’m capable of other things and I think that aesthetically, too, I have these really fun aspects of myself that a lot of people may see when they meet me in person, but it’s obviously not the aesthetic of We Are The In Crowd. There are a lot of things sort of changing in my mind and that definitely fueled that fire and that shift from We Are The In Crowd to SAINTE. And when I talk to Cameron [Hurley, guitar] and Mike [Ferri, bass] about it, they’re like, “Yeah, this just makes sense.” And they were with me every day, too, and they were like, “This is definitely real. This is a good idea, and is accurate, and makes sense in this moment.” It was actually a no brainer in my eyes.

What gave you that initial creative push?
I think that the main push was that I was constantly finding it really difficult to really, to truly be myself on stage or on record. Frustration pushed me to want to create something that felt more natural.

“I was constantly finding it really difficult to really, to truly be myself on stage or on record. Frustration pushed me to want to create something that felt more natural.”

In terms of fan reaction, what were you expecting and what was the reality?
I expected myself to be extremely nervous because this is a really personal project for me, just in general. With We Are The In Crowd, we always felt like, “Okay, I know where this is going to go.” I already kind of  knew who our fans were and what they were into and how they would probably react. Then with SAINTE I was like, “This is obviously going to be different.” I felt way more vulnerable. So it definitely was very nerve-wracking. We were definitely worried that fans would [say], “This is too different, I like We Are The In Crowd better.” Those concerns of ours are why I went, “This is something different so we should actually treat it like something different.” Not just put out a We Are The In Crowd record that was so different that people went, “Well, I liked the old stuff.” I’ve been in the position of the fan. I’ve definitely listened to artists or bands and just went like, “This is just not for me, why did they do this?” So creating something completely new definitely helped settle those nerves.

“We were definitely worried that fans would [say], 'This is too different, I like We Are The In Crowd better.'”

What was the creative process behind “Technicolor”?
We came in contact with Raul Gonzo, who directed the video, and he had been doing this photography collection that he was calling “Color Madness,” and we had seen it and it was one of the coolest things I’ve seen. And it really, truly connected with me. It felt like something I would literally just go out and do. I looked at it and was fangirling. I was like, how do I contact him and be like “Yo, do you want to work together?” without sounding like I’m totally drooling over what he’s doing? [Laughs.] It did kind of just fall into place as far as that goes, and the more that Raul and I worked together, and just having a new creative mind involved, it was really easy for me and him to collaborate and go back and forth with weird ideas. We did click in that way and I said, there’s a lot of things with We Are The In Crowd that I never really got to express; it was just word vomit. I was like, “And what about this?! I swear if I don’t wear bunny slippers, it’s gonna make a big difference.” There’s just really funny things like that. Yeah, it really did just come naturally, especially with him because he was for everything, he was all for it.

So what’s next for SAINTE?
We’re actually filming part two and three of this “Technicolor” video sequence we’re doing. I’m really excited. We’re gonna do that in a couple weeks. Hopefully some touring next year and obviously new music. That’s definitely gonna happen.

Any idea when on new music?
I do, but I’m not sure if I can say it. [Laughs.] It’s so funny because I was saying “soon” for about a year, and every day the replies on Twitter kept going like, “Yeah, your definition of soon is definitely not what mine is…” [Laughs.] But it's sooner than my last soon, probably in the next couple months.

We left off with We Are The In Crowd saying, “This isn’t goodbye, this is BRB.” Is that still the case?
We Are The In Crowd is a huge part of our lives, and the fans as well, and I feel like that is still the case for sure. And there’s still songs on the back burner; we wrote a ton of music to be released, but right now the focus is definitely SAINTE, and I could not be any happier about that direction right now.

Will we ever get to see that lost third album?
It’s hard to say, because I’m focusing on this thing right now. It’s like, how can I promise something else that’s out there? But I’m assuming that eventually it will happen. ALT