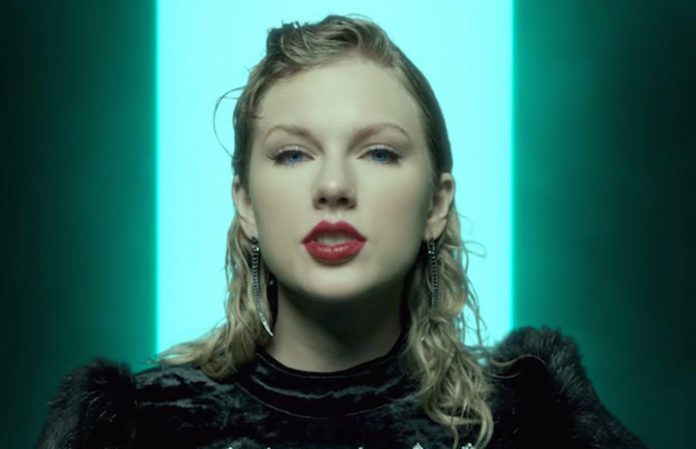 Contrary to what her song “Look What You Made Me Do” will have you believe, the old Taylor Swift is not dead, nor is she keen on learning from her previous catty or petty behavior. In fact, she’s back with a vengeance and she’s resumed her role as the ever-suffering princess, forced to take on the world that’s trying to beat her down. Still content with playing the victim, blaming others for the perceived injustices she feels she has suffered: instead of offering anything new to her public narrative, Swift is set on perpetuating a set of ego-driven ideas that pit her against her naysayers. In doing so, she is showing us that she is now dreadfully out of step with what pop culture and the American culture at large are trying to achieve. At a time when it’s clear that a great majority of Americans are fighting for unity rather than division, Swift is only feeding into our worst instincts with her new music.

Let’s start on a micro level: “Look What You Made Me Do” is a thinly-veiled diss track about Kanye West and Kim Kardashian. Swift’s highly-publicized feud with West, which began at the 2009 MTV VMAs (which was eight. Damn. Years. Ago.), exploded during the summer of 2016. Swift was vilified for her alleged side of the feud and her dismissal of it with the infamous “I would like to be excluded from this narrative” line didn’t do much to endear her to the public.  It’s understandable and thus easy to sympathize with why she’d feel hurt and betrayed but her choice to stay petty about it, which is evident in this single that sounds like she’s been grooming her grudge for a year, is again not helping in getting us to sympathize with her.

But instead of moving past this feud and leaving the rest of her public drama to the wayside, as she did when she deleted all of her social media posts from her various accounts a week before the release of “Look What You Made Me Do,” Swift decided to dredge it all up. She appears to be clinging on to her grudges, favoring language that pits her against the world because she apparently has been burned so many times. It’s mildly interesting that she uses the song’s music video to poke fun at her various personas and call herself out with the same criticisms that have been lobbed at her, to be fair. At the end of the video, one of her personas calls another a “bitch,” while another snaps photos to get “receipts.” But it’s a non-apology, a not-so-placating gesture that lets her feel like she’s absolved herself without really acknowledging she’s at fault. In a time when all we want is an acknowledgement of wrongdoing from those in power, Swift begins to fall out of step with the public.

Furthermore, “Look What You Made Me Do” employs language that a rabid fandom like Swift’s could translate as “us versus them,” a dangerous idea in the larger scheme of things that not only plays into the divisive rhetoric we see in the news, but also conflates the idea that being petty and grudge-ridden is somehow cathartic. Swift may not be actively pushing a political agenda, but the mentality of “me versus you” or “us versus them” is so prominent in 2017 that we now see it tearing apart various groups across the nation: the police versus communities of color, immigrants versus ICE, white supremacists versus an inclusive society, and so forth. That once petty mentality she sings about in “Look What You Made Me Do” is no longer the stuff of celebrity feuds; it’s real and it’s at our doorstep. That Swift charges forward without learning from her actions and, furthermore, selfishly sings about this oppositional idea without understanding the greater sociopolitical context of her actions is deeply troubling in 2017.

It also makes her song stick out like an eyesore, when the current music landscape boasts Pink’s “What About Us,” We The Kings’ “Ally” and even 30 Seconds to Mars new song, “Walk On Water.” These songs, which are built on messages of allyship and love and seek to question restrictive institutions which perpetuate that “us versus them” mentality exhibited in “Look What You Made Me Do,” are more representative of a direction that’s gaining traction in America right now. In the fight against a patriarchal, restrictive system, this music feels so radical and speaks so deeply to the spirit of the times because it’s a silver lining. If music is like a mirror to society, the what’s being reflected back to us through this music is that we Americans want more, we want to fight for better, and to do it as a united front. There is a push to resolve divisions rather than perpetuate them. It may be tough for some people to understand, especially those who thrive by nurturing grudges while they sit in a place of extreme safety and privilege, but that unified and progressive America is more in tune with the spirit of the times.

I can’t speak to Swift’s character as a person. I can only speak to her music and what it says about her. In that regard, considering she is poised to release an album titled Reputation where she will comment on how she believes she is perceived by others, she’s doing little to rehabilitate her image with her first album single or the message she is spreading with it.