With the release of his debut album steadily approaching, Teddy is teaming up with AP to bring you an exclusive behind-the-scenes look at his next music video and give some insight into the upcoming LP.

When it came to finding his sound, Teddy reveals that it was process, but still “a natural thing.”

“It came naturally through trial and error,” he says. “Just dropping music in the past and making all types of music and [seeing] what felt natural and right. What was the right sound to help me [convey] how I wanted to express myself and how I wanted that to be received? What I want listeners to take away from it [is] super important to me.”

Teddy pulls inspiration from artists such as Sticky Fingers, Future and Young Thug, and he sees a future when both the alternative and trap scenes will come together even more seamlessly.

“I think the day that we can bring in artists like that from the trap world to a more alternative sound, it’s going to be something super special that people haven’t really explored yet,” he shares.

After the release of his first EP, Teddy released a couple of singles and most recently a new music video for “Intro (Castle Life).” He’s gearing up to drop the next video for the second single off his upcoming self-titled album.

“Spine” was shot in three takes, one indoor and two outdoor. The video wasn’t meant to make you think. Its main point was to bring different people together from all walks of life.

“There’s not so much a message,” Teddy says. “It’s pretty universally understood. It doesn’t matter who you are [or] what you look like. All those people [in the video] just helped add to the vibe of the song and the energy of it, which is positive and happy.”

He went on to say the creation of TEDDY was more stressful than previous projects, but it’s still something he holds close to his heart.

“It’s music, but when you put together a collection, an album or something, it’s so much deeper than a project,” he explains. “Especially in my eyes, it needs to be something you’ll be able to play through. There’s certain points and certain triggers that you’re supposed to filter and emotions. It’s a little bit of a roller coaster, but it all makes sense.

“I was asking myself, ‘What am I trying to do? What am I going for? What do I want people to feel from it?’” he continues. “There’s a lot of questions I asked myself making it. I think generally, the vibe at the end, it’s just a great fucking album. Top to bottom, it all makes sense.”

Check out some photos from the set of “Spine” below. 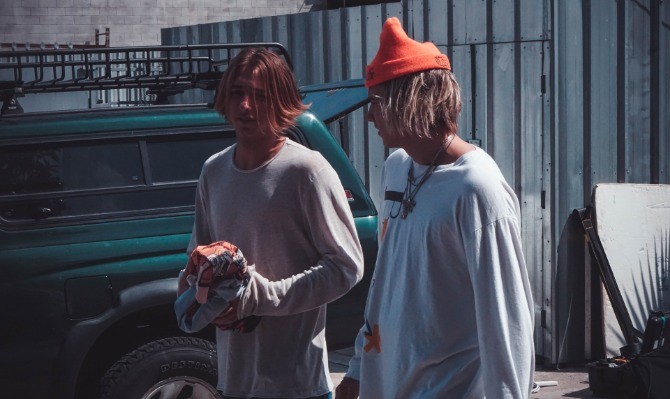 The “Spine” music video will be released April 24, and you can check it out on Teddy’s YouTube page. The single will appear on the rapper’s debut full-length, TEDDY, which you can presave here.