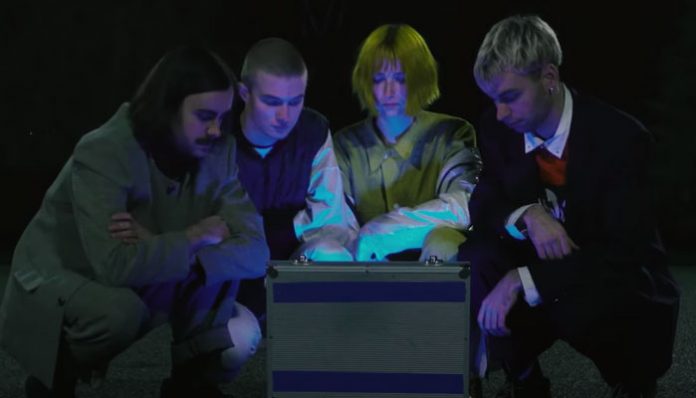 During the pandemic, Los Angeles-based singer-songwriter Tessa Violet got a new job. Don’t worry: It’s nothing that’s going to keep her from bringing her patented good vibes to her fans. Violet became an A&R consultant for TAG, the indie label created by Gabe Saporta. Her first signing to the label is Vernon, British Columbia-based pop-rockers daysormay, whose new video “Role Model” we are premiering today.

We’re pretty sure Tessa Violet doesn’t go into the TAG offices daily or runs up an expense account to lure bands to the label. Instead, she teamed up with vocalist Aidan Andrews, drummer Carson Bassett and bassist Nolan Bassett for both the song and the video. Once she heard their perfect pop stylings, she immediately wanted to share them with the world. She brought them to TAG’s Saporta and the rest is history in motion.

Tessa Violet and the band talked about their first meeting, the glowing briefcase in the video (shades of Quentin Tarantino’s Pulp Fiction), current events not affecting their art and the joy of fans.

Let’s talk about the mutual admiration society between daysormay and Tessa Violet. How did you get on each other’s radar?

TESSA VIOLET: I was on tour with COIN, and I had two headline shows on that tour, one in Chicago and one in Portland. I tweeted to my fans, “Hey, I need a local support act in the Pacific Northwest. What are your favorite local Pacific Northwest-like smaller bands?” I got a bunch of submissions. One of them was daysormay, and I was like, “Dude, these guys are incredible.” And I love this song “Role Model.” They were too far from Portland to support that one. But I added that song to my playlist and sent it to my manager. I was like, “Check out this band, they’re awesome.” I brought them out for a third of my headline tour. Then they were like, “Hey, you want to sing on this song?” And I’m like, “Of course, I want to sing on this song.”

And now you’re a big A&R representative, and you’ve signed them to TAG.

So guys, your Tessa Violet experience has been pretty good. Do you have any great stories about the making of the video?

AIDAN ANDREWS: The video was an insane process. Tessa was in the studio with us the night before we were scheduled to do the video shoot. And we ended up spending pretty much the whole night in the studio. So we only had an hour or two between that and when we’re supposed to start. I think these guys got a little bit of sleep. I decided not to sleep and just get everything ready. We started at 6 a.m., picked up our camera operator and just spent the whole day in a haze. And I don’t really think you can tell. Which is cool.

Where was it shot?

ANDREWS: It was shot in downtown Vancouver. We just stole all the shots. We didn’t have any permits. Very guerrilla filmmaking, on the run in different locations.

Who likes the movie Pulp Fiction?

CARSON BASSETT: I love Pulp Fiction! I don’t know if you’re leading to the parallel in the briefcase…

CARSON: In the beginning, it was unintentional. But then we realized how it actually made sense in how we wanted the visual represented. Also, having Tessa on the song and the story we wanted to tell with her. It almost started making sense: “What’s in the briefcase?” “But why is it so important?” I thought it was a cool little nod to Pulp Fiction.

ANDREWS: The video is part one of a bigger story we want to tell. And it’s also a video that’s for people who just want music videos. But I think we’re always trying to be the kind of band or artists that if people want to dig deeper, if they want more, it’s there for them.

What’s “Role Model” about? Is it a cautionary tale to yourself or to somebody else? Who’s the intended subject?

ANDREWS: Cautionary tale is a good way to put it. Four years ago, we were doing an interview. It was a strange question to ask a small band that are just beginning: “Do you have advice for younger artists or people just starting?” I really couldn’t answer it. I felt like I’d bombed the interview because of that. Then I just got really, as a lot of kids that age do, angsty and introspective about it. It wouldn’t get out of my head for a long time. The song was written over two years. A cautionary tale, just with a lot of different life experiences to draw from each person.

Once Mother Nature stops hating us, you’ll be touring together?

ANDREWS: We were told to not expect shows until next year. So we’re hoping it will be sooner than that. But yeah, we don’t really know.

VIOLET: We were planning to go on tour at the end of the summer. But now it’s like what we’re reading online, there’ll be no touring until 2021. So we’re eagerly waiting till then, being available online, doing my thing.

ANDREWS: We’re getting a lot of writing done, so that’s a bonus.

Well, that’s good. You’re going to have to impress your A&R person with some new songs so she can tell you if they’re any good.

VIOLET: [Laughs.] They’re such hard workers. It’s inspiring me, you know? It’s just great to be around people who also have a work ethic, have a dream and work for it.

NOLAN BASSETT: We had one EP [Talk Peace To A Wolf] that came out before that was our first legit thing that we put out. Starting with “Role Model,” we’re going to start releasing more singles leading toward an EP. We’re trying to be as reactive as possible to how some things will hit and how they land. Early next year is a pretty good estimate.

Do you think this historical situation will have affected your art regarding which type of songs you’re writing?

ANDREWS: That’s a good question. I think maybe slightly. I’m almost anti-writing a song about it. It just seems to be what so many people are doing. And I feel like there’s only gonna be a few songs that I think capture it well.

ANDREWS: Exactly. I think the biggest way it’s affecting us is that it’s giving us more time to be reflective and to actually work on stuff. But in terms of conception, so far it hasn’t really made its way into that.

What’s the most joyous thing everybody has done during this quarantine?

VIOLET: Good question. I’ve been doing Zoom calls with my fans. They lighten me up. Doing them by city. It’s been really fun. It’s great to feel like I’m being given the opportunity to get to know the people who support my music.

ANDREWS: Thanks to Tessa, we’ve been able to hop in some of those, too.

VIOLET: Here’s the thing: If people like my music, they’re probably going to like my taste in music, too. “Here’s some music I love. Here’s the guys who make it. Also an independent act.” It feels like community building. When you start Zooming with your fans, they feel like friends.

Check out the video for daysormay’s “Role Model” with Tessa Violet below.